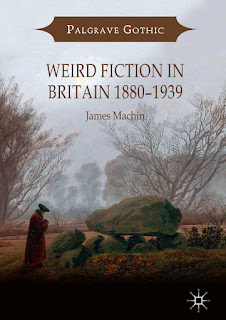 Weird Fiction in Britain 1880-1939 by James Machin has just been published by Palgrave Macmillan. The author is the co-editor of Faunus, the journal of The Friends of Arthur Machen and also has a keen interest in the wider literature of the Eighteen Nineties and beyond.

The publishers describe the book as “the first study of how ‘weird fiction’ emerged from Victorian supernatural literature, abandoning the more conventional Gothic horrors of the past for the contemporary weird tale.”

It discusses “the British writers who inspired H. P. Lovecraft, such as Arthur Machen, M. P. Shiel, and John Buchan” and “focuses on the key literary and cultural contexts of weird fiction of the period, including Decadence, paganism, and the occult.” There is also discussion of more liminal writers such as Count Stenbock and R. Murray Gilchrist.

We invited James to discuss his book with Wormwoodiana:

What drew you to this particular period - do you see it as a time of transition?

I would say it was most definitely a time of transition … in fact, a very long-running academic journal focused on the period is called English Literature in Transition. There’s a book I particularly like by John A. Lester, called Journey Through Despair, 1880-1914, originally published in 1968 - the title nearly sums up the shift from the old religious and social certainties to a new sense of modernity; scientific, social, cultural. This all played out in the literature of the period. The Education Act of 1870 is quite key here: before that, literature was the preserve of a cultural elite. It was a sort of priestcraft. By the end of the nineteenth century, the reading public had expanded exponentially because of the higher literacy rates. And all these new readers wanted something to read … hence the explosion in journals and magazines. Importantly for weird fiction, the short story was the perfect form for this newly vibrant market. Poe was by then regarded as the master of the short story form, so it was inevitable that he was widely imitated.

Do you think these writers haven't had the attention they should, because they're in the Weird Fiction field?

The short answer is yes, I do. John Carey wrote a mildly controversial book in the 1990s called The Intellectuals and the Masses, in which he argues that literary modernism was an attempt by the cultural elite to distance themselves from the dismal little clerks reading Tit-Bits on the Clapham omnibus. Now that nearly everyone could read, the literary elite needed to invent an intentionally inaccessible literary language, in order to demonstrate their superiority to the riff-raff - hence Ezra Pound, Eliot’s The Waste Land, etc. This is quite a crude gloss on Carey’s argument, but there is at least an element of truth in it. In the light of so much being published, there was an intense self-consciousness at the fin de siècle about how to police the line between good and bad literature. Machen, for example, claims that he never got invited to contribute to the Yellow Book because he was once at dinner with its editor and expressed an admiration for the Sherlock Holmes stories.

One of the methods of policing this line - which I think emerged at the time, and is still very much with us - is through genre. The ‘Romance’ (more associated with imaginative literature) was deemed déclassé, whereas the modern ‘novel’ was high art. It’s telling that Machen insisted on describing his novels as ‘romances’- he was sensibly recusing himself from the argument. I don’t really go into this in the book, but I think that, with regard to weird fiction, this was all compounded by the fact that as the twentieth century progressed the assumption that ‘good’ writing could be identified by its stylistic minimalism and spareness also worked against the fervid extravagences of e.g. M. P. Shiel. I’m no doubt in the minority when I say I would prefer to read Shiel’s deranged Carlylean prose rather than Hemingway or Carver any day of the week, but even so, I think the puritan zeal with which the ‘rules’ of ‘good’ writing are enforced to this day probably make for a duller literary terroir. People certainly seem to have it in for adjectives.

When researching the book, it was occasionally quite moving to see a now-obscure author like R. Murray Gilchrist being described by contemporary critics as one of Britain’s finest writers. Of course, myriad bestselling Victorian authors languish in almost total obscurity today (often for good reason), so it’s difficult to lay this entirely at the door of genre snobbery. It’s also worth noting that when ‘The Great God Pan’ was lambasted by critics, it was usually because it was deemed to have transgressed the bounds of good taste, just as Arthur Morrison’s East End tales transgressed the bounds of good taste. The latter was considered no more acceptable than the former on the basis of its social realism. However, genre snobbery is of course still very much with us: I’m amazed at the contamination anxiety, and the pains some prominent contemporary writers will take to insist that their science fiction or fantasy novels aren’t science fiction or fantasy novels. They endlessly tie themselves up in knots, desperate to avoid the stigma of genre. It’s all a sort of desperate casuistry.

Did you see certain affinities between the writers you discuss?

There are certainly thematic affinities regarding a resistance to reductive, materialist accounts of the universe. This can involve an interest in recrudescent paganism, the occult, and so on. The one thing I really lit on is the foundational and persistent influence of literary Decadence … Brian Stableford remarked somewhere that the Decadence of the 1890s never really died, it just moved to the U.S. with Lovecraft, Clark Ashton Smith, etc. This observation really struck me, and in a way the entire book is more or less built on Stableford’s insight here.

What writer's work surprised you among those you studied?

First off, something of a disclaimer: this book is by no means a comprehensive survey, or even a survey, of the weird fiction of the period. I hope I’ve covered my bases in terms of at least mentioning the key players, but- as perhaps suggested by my answers above - the book is very much a cultural history, with a distinct argument about the literary and publishing fields of the time. I've focused on specific writers in service to my central argument, rather than due to their current prominence as a weird writer of the period. It also leaps to the US at the end, to look at how some of the issues discussed then play out in Weird Tales in the 1920s and 30s.

This caveat aside, I was quite surprised to spend so much time on John Buchan - this is partly the result of me becoming fascinated by him and his writing, but also because he so neatly demonstrated my central argument. He fell, and still falls, between all sorts of different cracks. He was a hugely talented writer, and there was a frustration among his contemporaries that he didn’t apply these talents to more purist literary ends. He happily positioned his writing as ‘high lowbrow’, but this really only applies to his thrillers. He emerged as a writer in the 1890s and was, barely in his 20s, right at the epicentre of British Decadence, being a contributor to the Yellow Book and a reader for John Lane. One of his first works, Scholar-Gipsies, even has a faun on the cover! By the beginning of the twentieth century, he had a reputation as a master of the weird tale - Lovecraft was a big fan. This of course was overshadowed by his huge wartime success with The 39 Steps. Even so, he was still writing wonderfully weird novels through the 20s and 30s: Witch Wood, The Dancing Floor, and Sick Heart River, for example, all now underread and underrated.

Two other writers spring to mind: Ernest G. Henham’s novel Tenebrae and R. Murray Gilchrist’s short story ‘The Crimson Weaver’ are both superb, and I’m not sure I would’ve encountered them were it not for writing this book.

Fantasy is often seen as a traditionalist form. Did you find that too or did you see some modernist and experimental elements?

As perhaps suggested above, attempting to neatly disentangle genres and modes of writing is a fairly hopeless endeavour. For every rule that someone puts forward, numerous counterexamples usually spring to mind. One thing that makes this especially tricky concerning the period under discussion is that the boundaries between ‘reality’ and ‘fantasy’ were far from clearly demarcated in real life, let alone literature. I don’t much discuss Blackwood in the book, alas, but he’s a good example - when he was writing about nature spirits etc., this wasn’t straightforward fantasy. As Machen averred, he actually believed in such things. Nobody really falls into line with one’s expectations, either: Machen, for example, was in many ways a thoroughgoing sceptic while numerous prominent scientists of the day were members of the Society for Psychical Research and, with the benefit of hindsight, seem embarrassingly credulous about such things.

In terms of fantasy as a genre - in my introduction I set out my stall in terms of the kind of fiction that I see as most indicative of the term ‘weird fiction’ at the time: not the fully fledged fantasy of Dunsany and Eddison etc., ('secondary world' fantasy) but rather fiction that doesn’t settle upon itself as either realism or fantasy; fiction which in many ways is self-consciously non-committal, but which because of this has a unique ambiguity and a particular frisson, which engages with the numinous as much as the horrific. Having said that, writers like Shiel and Lovecraft aren’t exactly known for their quiet subtlety - again, it’s very difficult, if not impossible, to generalise. The term ‘weird fiction’ is incredibly slippery and has always been fairly capacious. The book is about ‘my’ weird fiction, which I see as being very much tied to literary Decadence.

In terms of modernist and experimental elements: Machen and Shiel both anticipated the 'stream of consciousness' usually associated with later modernism. Later works by Machen, ‘N’ and The Green Round for example, are effortlessly experimental in their disregard for straightforward narrative (as was ‘The Great God Pan’, of course). I didn’t manage to get to Mary Butts in the book, but I think a story such as ‘Mappa Mundi’ is a great example of the weird mode and literary modernism operating in seamless tandem. Of course, this all depends on how we define our terms. It’s been argued that Decadence was the beginning of modernism and it should be seen as a whole, which of course includes Machen and Shiel as key participants in a movement subsequently developed by Joyce and Woolf etc.. If Baudelaire was the first modernist, then Poe, again, has a good deal to answer for in terms of both weird fiction and modernism. In fact, in the context of the book, Poe is pretty much to blame for everything.