The Doomsday Blues of Beelzebub Jones 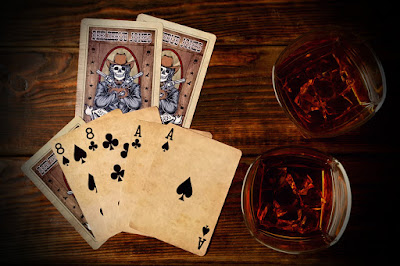 There’s a whole smoky mythos involving playing cards, gamblers, and the Devil, and it is the sinister theme of Doomsday Desperado!, a new, raw-throated blues album from the evocatively-named Beelzebub Jones.

With titles such as ‘The One of Four’, ‘The Dead Man’s Hand’, ‘The Ferryman’, and ‘The Final Showdown’, you know at once the strange terrain we’re travelling in. The husky, whispered, hard-bitten songs are haunted by hacienda guitar, and there are plangent echoes of Ennio Morricone’s melancholy spaghetti western soundscapes.

The album is accompanied by a storybook written by Richard Wall, author of Hank Williams’ Cadillac and other short story collections. Sadly the special edition, with specially-designed poker cards has already sold out.

Two previous albums by Beelzebub Jones are A Good Day to Be A Bad Guy (sold out) and The Forsaken Territory (still available).

Strike a match, light up a foul black cheroot, gaze into the orange haze of sunset, tilt your fedora and walk out to meet that dark stranger . . .