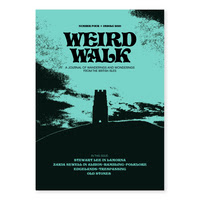 In my story ‘As blank as the days yet to be’ (collected in The Uncertainty of All Earthly Things), the narrator mentions that he subscribes to a number of ancient mysteries journals: 'The Golden Tree, which was published by a Druid order . . . Pendragon, about King Arthur and the Matter of Britain . . . The Atlantean . . . which gave messages from a former high priest of the great drowned realm, received via the astral plane. Wood & Water contained news of sacred groves and holy wells . . .  Alembic was a journal of the Western Mystery Tradition . . . there was Logres, a newsletter . . . on effigies in the landscape . . .'

There are still, I am pleased to say, several such journals still going, including Northern Earth, Caerdroia (on mazes and labyrinths), Touchstone and others. And it is also good to see that a few new journals have also started that seem to me to have a similar spirit and inspiration. One of these is Weird Walk, ‘a journal of wanderings and wonderings from the British Isles’.

Number 4 includes an evocative essay by Stewart Lee, well-known Arthur Machen enthusiast, about his discovery of the artist and author Ithell Colquhoun, and consequent exploration of the area around Lamorana in Cornwall where she lived. The piece zestfully expresses the joy of being out and about in sacred country, and acknowledges also the influence of those splendid books about ancient, haunted places by Janet & Colin Bord, such as Mysterious Britain.

In other pieces in this issue, Zakia Sewell celebrates, among other things, discovering the music of folk-rock pioneers Pentangle, Archer Sanderson offers a guide to edgelands, ‘those liminal spaces that hang suspended between the urban and the rural’; there’s an interview with Vicki Cummings, Professor of Neolithic Archaeology, about her interest in this prehistoric period and its residues;  a guided walk around Glastonbury; and much more.

Anyone who enjoys classic supernatural fiction will also relish the atmosphere of the writing in this well-designed and imaginatively-edited journal.