Finding books in out of the way places 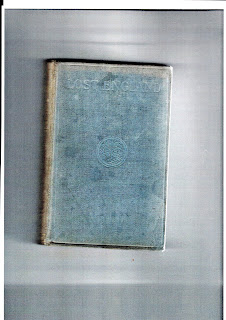 It has sometimes chanced that I have found myself in some out-of-the-way place without a book. This is a disconcerting experience for the keen reader, and recently, in a hotel on an industrial estate, not within obvious reach of any purveyor of literature, I was obliged to read the only thing to hand in the somewhat functional room, namely the breakfast menu. This, though not without interest in its way, did not stretch very far (in terms of reading, I mean: the breakfast itself promised to be, and was, extensive, if unsubtle).

However, on other occasions a chance find in a lonely place has proved to be a solace enhanced by its unexpectedness. Once on a rainswept holiday in Cornwall, and desperate to find something diverting to read, I considered without too much enthusiasm the single creaking plastic carousel of paperbacks in the leaking beach shack which was the only shop for miles around. But what was this? The Adventures of Solar Pons by August Derleth. Some splendid Sherlock Holmes-like detective yarns, just the thing to enjoy while the grey gusts swept against the cottage windows.

Since then, I have to confess to a sort of idle delight in the game of finding something interesting to read somehow, wherever I chance to be. And it is one of the incidental delights of even the smallest, obscurest places in England that it is surprising how often, one way or another, suitable reading matter may be found. Arriving early to meet friends in a minor Shropshire village, for instance, I looked in at the church and found not only one or two paperbacks I could quite enjoy, but also a guide to local ghosts. Later I was able to stroll around in the dusk regarding the apparent haunts it described with an enhanced appreciation, not to say apprehension.

Very few churches are without a printed guide of some sort, and these often make for diverting reading, with unusual anecdotes, snatches of local history or genealogy, diversions upon heraldry, and snippets of little-known folklore. Whether they are simply one sheet folded, or more compendious booklets, it is rare to find one without some points of singular interest, often several.

However, another practice which has begun to become more widespread is that of offering an assortment of second hand books, usually towards the back of the church, to raise funds. One church half an hour from here makes quite a point of it and has several hundred, along with recordings. (Its other attraction is a former Viceroy’s silk dressing-gown, now used as an altar cloth.) Sometimes, admittedly, this may lead to incongruity: one sacred edifice harboured several Dennis Wheatley novels of racy satanism, while in another a biography of Rasputin was prominently displayed.

On another occasion, visiting friends in a little Suffolk village and arriving ahead of time, we went first to look at the church. Here we found in the porch a large cardboard box full of jumbled books for sale, which afforded a most agreeable rummage. Indeed, we were still rummaging when the verger (or was it the churchwarden? A redoubtable lady, anyway) arrived to lock up. Observing the small pile we had accumulated, she invoked the Almighty and declared she had only put them out a few hours before, just to see if anyone would be interested. When we turned up at our friends’ house carrying the spoils, they exclaimed that only we could find a place to buy books in such an obscure nook of the country.

Nor is it only churches that can sometimes oblige the bookless. Another occasional source of reading matter may be found in repurposed telephone kiosks. These elegant scarlet pavilions, no longer required due to the spread of personal phones, have been ingeniously reused by some villages variously as miniature museums, art galleries, greenhouses – or book exchanges, where there might be a few dozen titles available. You may borrow or take one and leave another later.

Some shops now have a selection of books for sale for worthy causes. On one occasion I had walked along the canal to a village from which I proposed to get the train back. There are only half a dozen trains on its almost-forgotten branch line, and, as I had slightly miscalculated, I had an hour and a half to while away before the next one. I recalled, however, that the village florist usually has several trays of books on sale for charity and hoped I might turn up something worthwhile there. I was in luck: it yielded Siegfried Sassoon’s Memoirs of An Infantry Officer, certainly absorbing enough to take back and enjoy on the wooden bench at the little wayside halt, while reflecting that the quiet scene, full of birdsong, might have appealed in its rural tranquillity to the author of the book.

It’s also possible to get second-hand books at some railway stations. When I similarly allowed too much time to catch my train at Oxford station, I was gratified to find that in one of the waiting rooms there were a dozen shelves of books on sale for charity, including no less than five volumes of Jacobean tragedy. These (I admit) I passed over in favour of a history of English glass, a subject that had caught my interest after reading P M Hubbard’s splendid grotesque novel, A Hive of Glass, about the quest for a very rare goblet. Thus it is that, when a suitable occasion arises, I shall be able diffidently to mention, “Ah, yes, Early English Glass. Studied it at Oxford.” “Balliol?” “No, Great Western.”