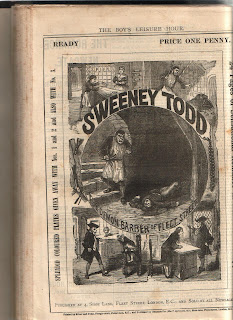 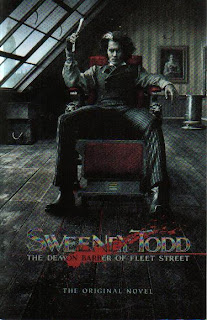 There have been a couple of excellent scholarly editions of Sweeney Todd in recent years. Wordsworth Editions recently published its 3rd edition of the text with a new introduction by Penny Bloods expert, Dick Collins, and Robert L. Mack edited the Oxford University Press edition in 2007.

Sweeney first appeared in The String of Pearls: A Romance, which was serialised in Edward Lloyd's The People's Periodical and Family Library in 18 weekly parts in 1846-7. A much expanded version was published in book form in 1850 by Lloyd and subtitled 'The Barber of Fleet Street. A Domestic Romance'. Charles Fox published a celebrated version as Sweeney Todd, the Demon Barber of Fleet Street in about 1880, which was much reprinted. Above is an ad for it in Fox's Boy's Leisure Hour from 1888.

Melbourne book dealer John P. Quaine, who I've mentioned several times before, was a Sweeney expert, and, according to his obituary, owned several copies of the Fox version. He also wrote a radio play version in 1935 which was published in The Collector's Miscellany between May and December 1935.

The following article appeared in the Melbourne Argus on Saturday 8 July 1950, and was clearly influenced by Quaine, incorporating a couple of his inventions such as Sawney Bean, The Man-eater of Midlothian. Recent research has shown that James Malcolm Rymer, not Thomas Peckett Prest, was responsible for The String of Pearls. 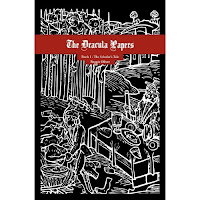 I just received my copy of Reggie Oliver's new novel, The Dracula Papers Book I: The Scholar's Tale (ISBN 9781907681028, $18.00 trade paperback), the first of a planned four book series, published by Chômu Press.  I usually don't read series books until I have all of them at hand, but I may have to make an exception here.  This is the third book published by Chômu Press, who have a highly interesting list of new and forthcoming books.  Check them out here.
Posted by Douglas A. Anderson at 2:01 PM 1 comment: