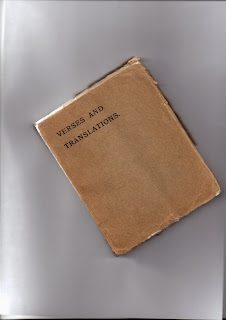 The offices of provincial printers, booksellers and stationers (they were often in one place) sometimes saw their everyday fare of tradesmen’s handbills, notices, business cards and brochures enlivened by more exotic literature. It was a printer in Chelmsford, Essex, who first saw the languorous verses of Evelyn Douglas, later to earn repute as the anarchist firebrand and dandy John Barlas. A works in Rugby, Warwickshire, produced the rural verses of the Nineties minor poet Norman Gale, a nightingale of the shires. A Hereford stationer undertook the publication of Arthur Machen’s Eleusinia, his now fabulously rare poem of the ancient Mysteries, the first work by the later master of supernatural horror and supernal wonder. Some printer unknown, but possibly in Yorkshire, did a job for ‘N.B.’, entitled A Book of Deadly Sonnets, the work of the Edwardian fantasy and nonsense poet Norman Boothroyd. These examples suggest to the seeker after the recondite in literature that there may yet be other volumes of rare and precious lyrics awaiting discovery. In some archive, in some filing cabinet, in boxes in some musty stock room, what may still be found?

These reflections are prompted by just such an unknown book, Verses and Translations, in tawny paper wrappers, printed by Hills and Co of 19 Fawcett Street, Sunderland, in 1910. The book is anonymous, and there is no introductory matter, nor are there any notes to give any clue as to who wrote it. The only very slight hint is that my copy, on the last page, has the initials 'H M' in light pencil, but they could be those of a previous owner or bookseller, and have no link with the author. There does not appear to be a copy in the British Library. Some of the original work is very well done, rather in the manner of Swinburne or Rossetti. There are translations of French decadent and symbolist poets such as Paul Verlaine, Henri de Regnier and Jules Laforgue, and versions also from the Greek Anthology. Whoever wrote the verses had a certain taste in exquisite phrasing and strange incantation.

Probably the book was printed at the author's expense and undertaken by Hills & Co as a piece of jobbing printing, rather than in the role of publisher. The newsletter of the Sunderland Antiquarian Society has carried an article on Hills & Co, who were evidently a much-respected local firm of long standing, principally a bookshop and stationers. They opened in the High Street in Sunderland in 1852, moved to 6 Fawcett Street in the Eighteen Nineties, and to 19 Fawcett Street a few years later, and, after other moves, only closed as recently as 2008.

There are other books to their name as printer around the same period as Verses and Translations. In 1910 they also produced (with Simpkin, Marshall, Hamilton, Kent & Co) Bungalow Ballads – Echoes from the East by G.P.P. Randell, a collection of Kiplingesque verses composed in North India: these are probably not by our anonymous poet, unless he was very versatile. A year after, they did print another anonymous book, Three Plays – Dr Sylvester’s Supper; The Last Day of Daphne; Cythera: and another anonymous title was The Story of a Little Pool (1915).

They also printed local guides and histories and folk-lore, lives and memoirs of local worthies, a book of sermons, and the rather splendidly entitled Catalogue of 9842 Stars, or All Stars Very Conspicuous to the Naked Eye, For the Epoch of 1900, With preface explanatory of the construction of the Catalogue, and its application to the use of 14 large star maps on the gnomic projection, designed for meteoric observations by T.W. Backhouse, complete with the fourteen large star charts. The poet of Verses and Translations invokes several stars by name, and ponders whether they are responsible for his fate. It is therefore tempting to wonder if there might be a connexion here, particularly as one piece speaks of the marvels seen through a telescope (“The moon, that great white vampire of the skies.”) But usually astronomy and astrology do not mingle, and Backhouse, it seems was also a keen weather-watcher who kept records for over sixty years. This doesn’t sound very like our aesthetical poet.

There are perhaps a few clues in passing references in the poems. One, a fine tale of faery trickery, has the narrator take a route past what is evidently Durham Cathedral, and beyond Hadrian’s Wall. Another poem speaks of a “Firth”, a Northern name for a river estuary. Several poems speak of scenes by the sea. But these tell us only what we could already guess, that the poet was probably local to the coastal North East. A single poem refers to a room in London: another is inspired by an epitaph in Derbyshire; they do not take us too much further. There is an opening dedicatory poem, not listed in the contents, ‘The Lamp (Salve Amica Lux),’ which laments a “well-lov’d light” that has been quenched: but the name of the mourned, who had “a beauty strange and fine” is not given. Notable, however, is the poet’s pagan invocation: “O God, O Pan, O flame-bestower,/Somewhere, somehow, the lamp, anew/With its essential flame endower…”, suggesting the ardour of his love and longing for the lost friend.

I am afraid we may never know who wrote all these rather swooning Swinburnean lines in the brittle beige paper wrappers. That seems a loss, but it must be a fate the poet foresaw when they refrained from putting their name or even a pseudonym to the pamphlet. There is a pessimism about human vanities in most of the verses, and several times the poet, perhaps in their own person and not as a posed character, speaks of a doom upon their destiny. They must, however, have hoped the verses themselves would find appreciative readers – else why issue them? – and so, in recognition of that fragile trust placed in us in that last Edwardian year, over a century ago, here is one of them, the last original verse of the volume, on the riddle of their sidereally blighted fate:

Star-stricken, constellation-cross’d,
I call to the clear unanswering sky –
‘Where lurks my foe, inimical stars ?
‘Silver Procyon, ruby Mars ?
‘A gem of the glittering galaxy ?’

In my short story "The 1909 Proserpine Prize" I imagined an Edwardian literary award, founded by an inventor of luminous umbrellas, "to reward the author of the book that most skilfully went into the dark and emerged with something of the light . . . ." The story is available for free reading in the Swan River Press Reader.

In an interview for Swan River Press, John Howard asked me who I thought should receive the Proserpine Prize today. This gave me the splendid opportunity both to mention some favourite authors and to think of some imaginary books by them, books that don't yet exist, but should. So if you ever hear of Mary Ann Allen's A Crown for the Unicorn or John Gale's Saraband of Sable, or one of four other fanciful titles, you'll know that the real world has caught up with the dream world at last.
Posted by Mark V at 8:03 AM 2 comments: 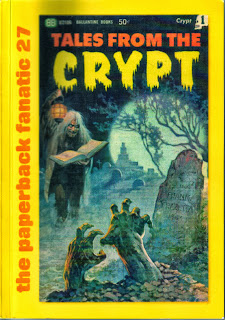 The Paperback Fanatic is a surprisingly long-lived labour-of-love of collector/cognoscente, Justin Marriott.  The magazine specialises in the 'mushroom jungle' of the British paperback industry in the '60s and '70s, though it does range further afield into American, German and Australian pulp paperbacks, with a particular focus on horror, fantasy, science fiction and crime.  It's a beautifully produced publication - full-colour, perfect-bound, the latest issue weighing in at a hefty 132 pages - with a nice mix of articles, interviews, cover galleries and letters by writers, editors, collectors and fans.  For those who discovered The Hill of Dreams through the 1960s Corgi reprint, or Hugh Lamb's anthologies in the Coronet editions, or Clark Ashton Smith in the extraordinary Panther reprints of the 1970s, Paperback Fanatic is a constant source of interest and delight.  Given its small press origins it's not mass produced or available in the usual places - subscription info is available here.
Posted by James Doig at 10:38 PM No comments:

Evangeline Walton's SHE WALKS IN DARKNESS now in print 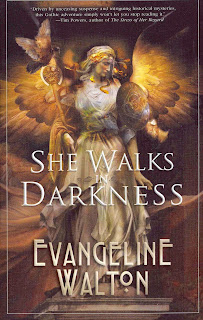 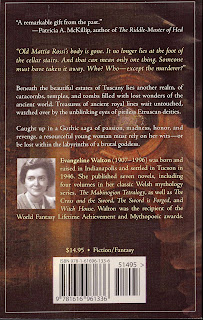 Another quick note to call attention to the fact that Tachyon Publications has just published for the first time Evangeline Walton's novel She Walks in Darkness, a kind of Gothic thriller written in the 1960s.  Tachyon has done a splendid job packaging it, with an excellent cover by Thomas Canty, an introduction by Paul di Filippo, and blurbs by Tim Powers and Patricia McKillip.  There is also a short afterword by me about the background of the manuscript. She Walks in Darkness is published as a trade paperback at $14.95, and can be ordered via Amazon US by clicking here for the paperback and here for the Kindle ($7.99), and via Amazon UK by clicking here for the paperback (£12.50).

(Click on the covers to see larger versions.)
Posted by Douglas A. Anderson at 3:31 PM 2 comments: 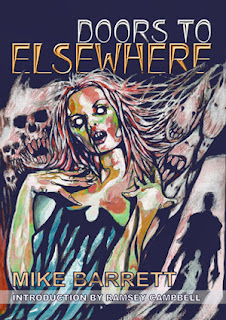 A quick post here to recommend a new book from Alchemy Press, which collects (often in expanded and revised forms) a bunch of essays Mike Barrett has published in the last decade on older writers of weird fiction. Three originally appeared in Wormwood, and others appeared in Dark Horizons, Fantasy Commentator,  and The New York Review of Science Fiction.  Introduction by Ramsey Campbell.  The full contents are listed below, but Doors to Elsewhere can be order from Amazon by clicking here for the UK (£10.99) and here for the US ($17.00).


DOORS TO ELSEWHERE by Mike Barrett