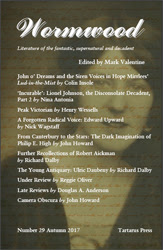 Wormwood 29 has just been published.

“The interplay between the visions and dreams that seep in from Fairyland to disturb the fragile facade in Lud, is highlighted in a number of motifs and recurring images... Time and clocks, trees, stone memorials and hidden chambers that dramatically disclose their secrets, are regular themes. There are occasions when these motifs overlap or blur together, to enhance the symbolism.”

“In a short space of time – he has so little left now – Lionel wrote a trilogy of infernal hymns: “Vinum Daemonum,” “Satanas” and “The Dark Angel,” products of the madness that insists upon his staying up all night long, fasting in preparation for communion the next morning, laying more torment on his frail body. He must not oversleep! He must not drink! The bottle glistens on the mantelpiece, beautiful by candlelight, its name “Vinum Daemonum””

Henry Wessells explores the Peak Victorian year of 1885 in literature:

“The writings of Upward are not well known these days, yet the ups and downs (mostly downs) of his writing career, his tenacity to expound a principled set of views over many decades, and the combative relationship he fought between writing prosaic political messages and his devotion to the creative process of writing poetry are all interesting. They indicate qualities of a distinctive writer and deserve more attention than they have received.”

“While High’s stories could be categorised as sf thrillers, many, if not most, of them did also make a point. They frequently examined the future of humanity in worlds dominated by far from benign technology and a range of threats from within—and outside. His protagonists were ordinary people who find themselves confronted by overbearing governments and bureaucracy, and pitted against worldwide conspiracy, corruption, and organised crime. . . .they were clearly-drawn individuals who had within them, or given to them, the seed of the solution to the desperate problems which they and their worlds had to face.”

“Initially I was not too impressed by the first two Aickman tales I read, certainly strange but only marginally ‘ghost’ stories—“The Trains” (which he included in his first Fontana anthology) and “Just a Song of Twilight” (The Fourth Ghost Book, 1965). Robert himself admitted to me that he was never really pleased or satisfied with this latter story, and therefore omitted it from all his future collections (until it was revived in the posthumous Night Voices).”

“Aickman notes that there is every reason to hope that ghosts exist, and that this is comforting to those like himself who “prefer writing and reading ghost stories to writing and reading most other forms of literature.” “The most important element in a good ghost story is the apparent reality of the happenings narrated.” ” 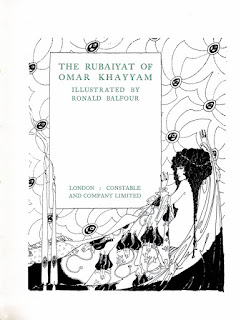 I chose a few of the designs to illustrate my essays on lost works of the Eighteen Nineties, presented in Wraiths and What Became of Dr Ludovicus (Zagava, 2014; new edition, 2015). However, as the Side Real commentary notes, very little seems to be known about Ronald Balfour.

As we have remarked before, lost artists of the fantastic are even harder to find out about than neglected authors. Indeed, in the absence of biographical information, the artist seems to be sometimes confused with Ronald Edmond Balfour (1904-1945), the historian. I am afraid I have forgotten now quite how I followed various leads to identifying a few basic facts about the artist, but this is what I found.

It seems reasonably certain that he is the Ronald Balfour who was the third and youngest son of Brigadier General Sir Alfred Granville Balfour, K.B.E., C.B., (1858- 1936) and Frances Elizabeth Simpson (d. 1936). An older brother, John, died in infancy and the second brother James was killed in World War 1 in 1917.

The artist, full name Ronald Egerton Balfour, was born in 1896 and died on 17 January 1941, apparently in a car accident. He had married Deirdre Phyllis Ulrica Hart-Davis on 24 April 1930, and they had two daughters, Susan Mary Balfour born 30 March 1931and Annabel Clare Balfour born 20 October 1935.

Balfour also provided “decorations” for Thin Air: A Himalayan Interlude by Constance Bridges (Brewer & Warren, New York, 1930). There is a suggestion that he may have accompanied the author to the Himalayas to make the illustrations. A copy of C.P. Skrine’s Chinese Central Asia (London: Methuen, 1926) has been catalogued with his signature, perhaps suggesting an interest in the region.

The Victoria & Albert Museum online catalogue includes the tantalising information that they hold a pencil drawing of a robot by Balfour, but it is not reproduced and they evidently have no further information about him. It would be interesting to know if this was intended for another illustrated edition. Capek’s R U R, which introduced the word ‘robot’ was published in Prague in 1920.

It seems unusual that Balfour apparently published no other illustrations than the Rubaiyat and the Himalayan book, and that so little seems to have survived about him. Perhaps there may still be fleeting allusions in unexpected memoirs, or designs in periodicals yet to be discovered. 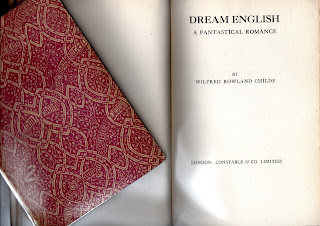 This year marks the centenary of one of the most fey and delicate fantasies ever to be published, Dream English: A Fantastical Romance by Wilfred Rowland Childe. It describes an imaginary England where neither the Reformation nor the Industrial Revolution ever happened, and all is (perhaps somewhat optimistically) an arcadian idyll of old stone cottages, arts and crafts, and a fervid mysticism.

It might perhaps be best described as a mixture of William Morris, Arthur Machen of the Grail romances and the aesthetic Catholicism of the decadent poets and artists of the Eighteen Nineties (such as Ernest Dowson, Lionel Johnson, John Gray, Aubrey Beardsley). Childe’s prose is highly mannered and lyrical and draws upon figures and symbols from medieval romance.

I remember finding my copy, appropriately enough, at the gatehouse to Hay Castle, then in use to sell fantasy books, and at the same time another book which shares some of its qualities and tastes, The Symbolic Island (1925) by Kenneth Ingram. There is a sort of drifty dreaminess about Childe's book which makes it quite exquisite, but it also has a strong determination to exclude modernity and celebrate the author's clear vision of a might-have-been.

Childe was known in his time as a minor poet (using the term in its precise and not dismissive sense), and his volumes The Gothic Rose (1922), The Happy Garden (1928) and a Selected Poems (1936) received a certain amount of respect. They are the work of a singular, scholarly and spiritual individual seeking his own way to express wonderment.

Childe was a friend of J R R Tolkien, and the godfather to his son Christopher. Indeed, if you were looking for a book that has even a hint of a Tolkienish atmosphere, you might do worse than turn to Childe's romance. I seem to recall that Arthur Machen expressed approval of it too. But his books have never received very much attention, and I was delighted to publish (in Wormwood 15) the only significant study so far, ‘Wilfred Rowland Mary Childe, With a First Attempt at a Checklist of His Published Work’ by Jonathan Wood.

I cannot do better, to celebrate the centenary of Dream English, than to quote from Jonathan’s essay (though you really need to read his full evocation of the book):

“Childe’s created landscape is that of the mythic and spiritual Avalon, born of a dedicated reader and dreamer, surrounded by ‘the cream of books on mysticism’, as his brother remembered. It mirrors his deep appreciation of the English landscape, the Cotswolds being its touchstone . . . Dream English is a book of ecstatic visions, enriched by the frailty and humanity of the two central characters . . . To read Dream English is to enter a truly original, playful but complex religious experience.”

Picture: the title page of Dream English, with the cover of The Gothic Rose also shown.
Posted by Mark V at 6:27 AM 1 comment: 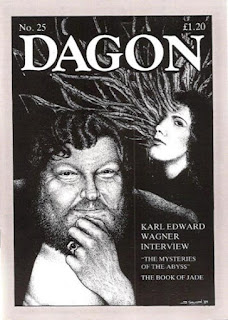 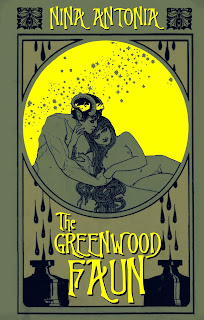 “shot through with decadence, poetry, opium and incense . . .this is a beautifully written proem: witty, crepuscular, enchanting, surprising”

On Wednesday 13 December, from 6.45pm to 7.45pm, author and Wormwood contributor Nina Antonia will be reading from her new book, The Greenwood Faun (Egaeus Press), "a beautiful, otherworldy novel which draws on the lost writings of Lucian Taylor and Lionel Johnson, the natural world and the preternatural; blurring facts and fictions.. ."

The free event, with mulled wine, is at Putney Library. It will be followed by a short discussion on how the author's writing about music led to her interest in fiction. To book, ask in the library, call 020 8780 3085, or email Charlene[dot]Coleman[at]gll.org.

“How thrilling it is to enter anew the world of the obscure curio shop, the clandestine printing press, the exquisite slim volume, the exotic cigarette and the pagan statuette, all graced by the aery tendrils of a rare incense!” –from the Foreword by Mark Valentine

The Swan River Press of Dublin have just announced The Scarlet Soul - Stories for Dorian Gray, edited and with an introduction by Mark Valentine, cover artwork by John Coulthart.

"These new stories, all especially written for this anthology, take us into some of the strangest and darkest places of the psyche. These ten boldly original portraits in the attic take many disturbing forms, revealing strong truths about the secrets of our selves, our society, and our very souls."

"I had with me a copy of The Picture of Dorian Gray. It was the edition issued by The Unicorn Press of 8 Charles Street, St James’s Square, in 1945, Martin Secker (Director), one of several imprints that discerning bookman ran in his time. The leaf before the title page read simply: OSCAR WILDE/Born 1856/Died 1900. And that stark statement was all the introductory matter there was, apart from the writer’s own Preface of elegant maxims, beginning, “The artist is the creator of beautiful things.” But not only beautiful things, surely? Grotesque things too, even ugly things, curious things and uncanny things, as the book itself showed." - from the introduction.
Posted by Mark V at 2:21 PM 4 comments: