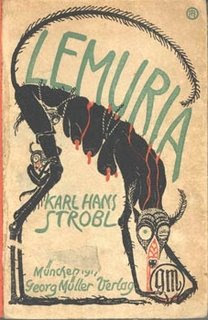 Due to all kinds of causes, the German language supernatural tradition is somewhat underrepresented. In the case of Austrian writer Karl Hanns Strobl (1877 - 1946) it is not difficult to see why.
In 1917, Strobl's anthology of horror tales with the remarkable title Lemuria was published in Germany. The horrible blackness and almost pathological nature of its interior illustrations closely connected to the fate of the German nation, embroidled in the onslaught of the First World War. Lemuria struck a chord in the German psyche and was reprinted well till after the Great War. German horror writer Hanns Heinz Ewers (wo later wrote the National-Socialist anthem Horst Wessel Lied), published Lemuria in a series titled Gallerie der Phantasten (Gallery of the Fantasts) published by Georg Muller Verlag in Munich.
Strobl was also the editor of Der Orchideengarten (Garden of Orchids), the world's first magazine devoted solely to the supernatural that debuted in 1919, four years before Weird Tales saw the light of day.
During the First World War Strobl was a messenger. After the war, he developed a strong sympathy for the Nationalsocialist cause. In 1938 Strobl worked in an important position in the Ostgau, leading a department of Goebbel's Reichsschrifttumskammer. This lead to his arrest by the Soviet troops in 1945. Strobl was forced to work at road construction for a while. He was released due to age and poor health. He died a year later in a home for the elderly near Vienna. At the time of his death, the Allied forces had prohibited his works to be published. Where once his books commanded multiple reprints and Strobl formed with Gustav Meyrink and Hanns Heinz Ewers the three dark princes of the German horror and supernatural tale, he died totally impoverished.
Posted by theo paijmans at 4:36 PM