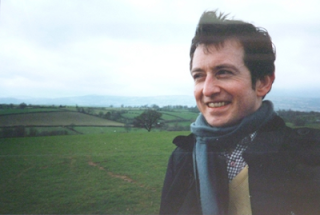 I am sorry to report the very sad news that Roger Alan Dobson, author, journalist and bookman of Oxford, has died. He was the co-editor, with me, of several booklets about Arthur Machen, of Aklo, the journal of the fantastic, and The Lost Club Journal (devoted to neglected writers). He also wrote radio plays, including a successful BBC Radio 4 production about the Kingdom of Redonda, the Caribbean literary realm associated with M.P. Shiel and John Gawsworth, which fascinated him: in recognition of his work here, Spanish novelist Javier Marias ennobled him in his Redondan court as the Duke of Bridaespuela .

Roger was proud of his Manchester upbringing, and wrote a study of Ann Lee, the Manchester Messiah, about a local prophetess. He was a regular contributor to the Antiquarian Book Monthly Review (ABMR) on recondite literary subjects, including one article which made out the case that Sherlock Holmes must have gone to a Manchester college. This exhibited the sense of mischief Roger often brought to bookish matters: he was also implicated, with his friend the bookseller Rupert Cook, in the letters and writings of the hoax poet (who showed signs of coming alive), C.W. Blubberhouse. He also contributed lively and learned material to Colin Langeveld's Doppelganger Broadsheet, sometimes as the querulous 'Professor Herbert Trufflehunter'.

I came to know Roger in the early Nineteen Eighties when I was told he was an enthusiast of Arthur Machen, whose work I discovered at the age of seventeen. This proved to be a considerable under-statement. Roger knew more about Machen than anyone else I ever met, and between us we started a modest campaign to revive interest in him, which was at a low ebb in the early Eighties. We met or corresponded with many who had known Machen, including his son Hilary and daughter Janet, and close friends such as Colin Summerford and Oliver Stonor: in time, we found others who were intent on celebrating him, leading to the Machen societies, journals and other publications since. Roger wrote the Machen entry in the Dictionary of National Biography, after rightly arguing for his inclusion: edited John Gawsworth's biography of Machen; co-edited Machen's Selected Letters (with Godfrey Brangham and R.A. Gilbert, 1988); and contributed to Faunus, the journal of the Friends of Arthur Machen, with illuminating essays on Machen mysteries. A checklist of his writings is in preparation.

But Machen was far from Roger’s only literary interest: he was immensely well-read, and talked charmingly and with infectious enthusiasm about many other, especially semi-forgotten, figures. For some years he and I would meet in Oxford, where Roger had a bedsit at 50, St John Street, a former home of Tolkien, and have long talks about books and authors who ought to be revived. Roger’s special passion after Machen was George Gissing, whom I then did not quite get (I suppose because he was insufficiently ‘like’ Machen): but he insisted on the wonder of The Private Papers of Henry Ryecroft, and I have recently come to see why: how I wish I could tell him.

Roger had been a journalist in Manchester and Bristol, and still occasionally did freelance work, but (like Machen) he came to dislike this, and preferred to write on literary themes. However, he never lost the journalistic knack of knocking on doors to elicit information, when he wanted to pursue a writer’s homes and haunts, which included Machen’s house in the Chilterns (then owned, to Roger’s delight, by a gentleman with the Welsh kingly name of Cadwallader); and the grave of the alchemist Thomas Vaughan in an obscure Oxford village (“the graveyard plan is on the back of a cornflakes packet”, the sexton told us).

Roger was a very private man: though I was among his closest friends in those Machenstruck days, I never learnt very much about him, except his bookish enthusiasms. He was devoted to literature and, as with Machen and Gissing, it seldom rewarded him materially: but it gave him rarer things; the joys of scholarship, shared discoveries, and the stubborn integrity of a proud spirit.

Below: Roger Dobson (right), with other Machen friends, striding off down the old lane from Llanddewi Fach to Llanfrechfa, a favourite walk of Machen's (photographs: Iain Smith). 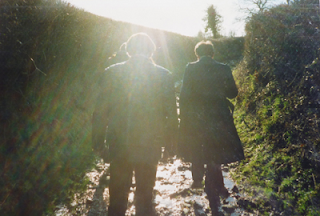