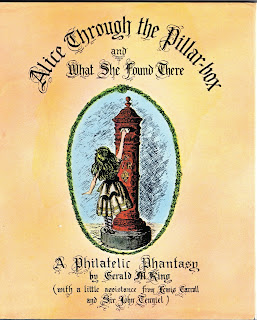 There is a long tradition of unofficial or fantasy stamps, known to collectors as “cinderellas”. They are distinct from those issued by the official authorities, usually sovereign nations or dependencies, who are members of the splendidly-named Universal Postal Union, which always gives the impression that it expects its services one day to reach to Mars or even Neptune.

The design and form of these cinderella stamps varies. Some betray their impromptu or amateur origin: but many look just like “proper” postage stamps: they are gummed, perforated, with a value, a notice of origin and artwork often at least equal to the conventional issues.

Examples in Britain include those issued for use by offshore islands, such as Lundy, in the Bristol Channel off North Devon, which do not have a Royal Mail service, and therefore offer a local post to the mainland. I wrote about a fictional local post of this kind, for one of the Islands of Fleet off Galloway, South West Scotland, in my story “The Prince of Barlocco” (available in The Collected Connoisseur).

For a while, experiments were made in sending post to remote islands by small rockets, such as to Scarp in the Hebrides. These were not always successful, and singed examples of such Rocket Post stamps, letters and cards are now highly collectable. Railways in Britain were also allowed to carry parcels, and letters (between stations only), alongside the Royal Mail monopoly, and some therefore issued their own “railway letter stamps”.

Most such stamps, however, are not used to pay for carriage, but are more like a form of miniature art or fiction. From Victorian times onwards, advertising stamps were issued to publicise exhibitions and trade fairs: these are often known as “poster stamps”. As well as these, however, there has also been a thriving tradition of purely “fantasy” stamps. 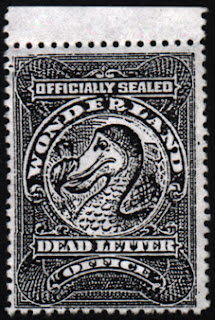 The most notable of these are the Wonderland stamps designed and issued by artist and philatelist Gerald M. King. This came about when he was dismayed that the Post Office declined to honour the centenary of Lewis Carroll’s Alice's Adventures in Wonderland in 1965 with an official stamp. He therefore decided to celebrate the occasion himself, and imagined what sort of postal service Wonderland might have.

The result was a charming and beautifully made series of stamps featuring characters and scenes from the book, some involving nice puns (eg "Hare Mail", and the Dodo Dead Letter Office). These also appeared in an illustrated album, Alice Through the Pillar-Box: A Philatelic Fantasy (1978). Mr King has gone on to create further stamps set in imaginary worlds, including a mingling of Wonderland with Lundy, and others that contemplate several alternative histories.

These are the talismans of untold stories, and Gerald M King's marvellous work is well worth celebrating in the 150th anniversary of Alice’s Adventures in Wonderland.

Update: Gerald M King has produced some excellent new stamps and covers to commemorate the 150th anniversary. Enquiries to: kingphantas@aol.com