THE LIBRARY OF THE LOST - Roger Dobson 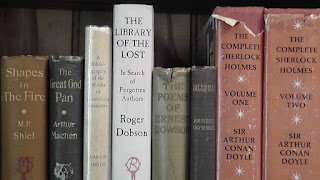 Why did W.B. Yeats want a hair from the head of Aleister Crowley, and how did the artist Althea Gyles get it for him? What was the terrible lesson learned by scholar and demonologist the Reverend Montague Summers? Why was Sherlock Holmes reticent about his college years? Which unlikely chronicler of the decadents numbered among his friends Christine Keeler, Sir Oswald Mosely, Colin Wilson and an assortment of beat poets?

The answers are to be found in The Library of the Lost by Roger Dobson, just published by Tartarus Press and Caermaen Books. This finely produced volume offers twenty illuminating essays on classic authors of the fantastic such as Arthur Machen, M. P. Shiel and Jocelyn Brooke, and such strange and outré figures as the Reverend Montage Summers and the artist Althea Gyles. There is a foreword by the eminent Spanish novelist Javier Marias reflecting on his friendship with the author. 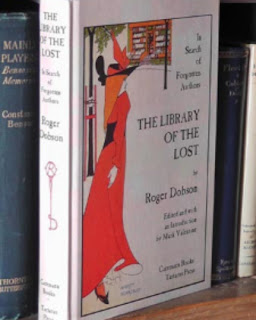 Here is an extract from my introduction:

“Roger Alan Dobson was an author, journalist, actor, and bookman who loved to explore the stranger margins of literature and its most outré characters. He wrote with learning and enthusiasm about the lost souls of the Eighteen Nineties and those writers who moved among the ways of magic and mystery. He liked nothing better than to visit the old haunts of these arcane characters, walking among obscure streets and overgrown graveyards to find their homes and their tombs. When he was not out on such pilgrimages, he liked to be writing, working prodigiously at essays, radio and television scripts, letters and contributions to newspapers and periodicals. He also enjoyed bookish conversation, always ready to share his latest discoveries or to learn more from other bibliophiles and scholars.”

This is a book brimful of Roger's journeys among the byways of books, which will appeal not just to connoisseurs of the fantastic in literature but also to all those who enjoy the quest for the rare and recondite.

Update 12 July - now out of print. Thanks to everyone for their interest in Roger's book.