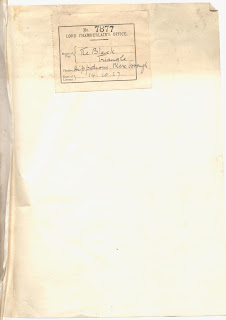 I mentioned in a previous post that we can’t really understand the R.R. Ryan novels without understanding the milieu in which they were written: the popular provincial theatre of the day.  One would reasonably expect traces of Rex Ryan’s plays to be found in the series of excessive thrillers he wrote for Herbert Jenkins in the 1930s.  One of his plays, written in 1927 and licensed at the Hippodrome in Mexborough, was The Black Triangle.  We know it was written by Rex Ryan because he advertised it for sale along with other plays of his in the Stage Directory in 1929.  I acquired a copy of the play from the Lord Chamberlain’s archive at the British Library, and it makes entertaining if typically crude reading.


It is a crime thriller reminiscent of his later books with bizarre goings on and a plot that stretches the imagination.  The play is mostly set in a country house belonging to James Sullivan.  There is a crowded household consisting of Sullivan, his son, Colin, Sullivan’s sister, Mrs Temperley, and her two daughters, Estelle and Nadine, and a cousin, Carlyle.  On top of this, Sullivan and Nadine like to take in unfortunate types in the neighbourhood, including a blind and deaf cripple named Paul who acts more like an animal than a man (but who responds to Morse code being tapped on his arm!), and most recently, an escaped freak from a passing circus called the Lion-Faced Man who horrifies all who see him.


There are various love interests happening, with Nadine at the centre of it all – she is courted by both Colin and Carlyle, whom she despises.  Paul and the Lion-Faced man don’t like each other and after a fierce fight the Lion-Faced man says that they knew each other in the circus.  James Sullivan then reveals that today is the 20th anniversary of his escape from the clutches of a Chinese secret organisation called the Brotherhood of Black Triangle, controlled by arch-criminal Soo Ki.  Evidently, when Sullivan was in China 20 years earlier he fell in love with a beautiful Chines woman who was betrothed to Soo Ki – when Soo Ki found out about the affair Sullivan was only able to escape death by joining the Black Triangle.  He obtained government protection and managed to escape, but Sullivan has been expecting retribution ever since.


It quickly arrives with the appearance of a black triangle painted on a canvas that Colin, a budding artist, was about to use.  And shortly afterwards THE TERROR (in upper case, as is THE INEXPLICABLE in Echo of a Curse) appears at the window during a violent storm: “THE TERROR appears at the window, clad in black, with a black veil falling over his face on which is a death’s head.  On his breast and on a background of white is a black triangle.  His hands are the hands of a skeleton, and the fingers end in terrible claws.  The veil rises, apparently by no agency of his own, and a ghastly Chinese face is seen.  He fixes his huge eyes on Sullivan and they never waver in their gaze.” 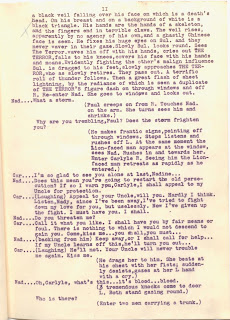 Sullivan is murdered and Colin makes the awful discovery of his father’s head in a trunk with a black triangle painted on his forehead.  The police are called in and a bumbling investigation ensues until Kit Temple, a Melbourne detective investigating the Brotherhood of the Black Triangle, arrives.


Nadine is kidnapped and there’s a nice scene where she apparently wakes up in an underground laboratory in Marsh Retreat strapped to a slab with a huge vat of acid nearby: “Above her is a dull green light, which just reveals her.  At the back hang huge black curtains.  Otherwise the place is rough stone, with a door L.C. at back.  After the curtain has been up a little, the light above Nadine goes out. An illuminated scull (sic), and the upper structure of a skeleton is seen, with arms extended.  It is about 6 feet above the floor, but slowly descends and moves back, then forward to Nadine.  She screams.  The face fades. Scream after scream is heard…” 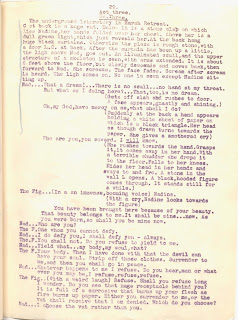 Sadly, the skeleton turns out to be dream, though the underground laboratory and vat of acid are real – no doubt an excuse to use a prized prop.  A black, hooded figure appears and orders Nadine to yield her body to him: “When I have done with that the devil can have your soul.  Strip off those clothes.  Surrender to me, and then you shall go in peace.”


Feisty Nadine declares, “I choose the vat rather than you.”  However, The Figure won’t take no for an answer: “The figure springs upon her and tears off a large portion of her dress.  A tremendous fight ensues, in which her clothes are torn to rags.  She fights the figure like a man.  They wrestle, roll over and over. But he gets her.  Raises her in his arms.”


THE TERROR arrives in the nick of time and forces the Figure into the vat of acid.  He then picks up Nadine and races off with her just as Colin and the others arrive.  Colin sees that there’s something in the vat: “Besides the vat are two huge pincers.  Silently Temple takes them up and hands one to Colin indicating their use.  Together from the vat they raise a complete skeleton.”  So the prized skeleton prop gets a reprise.  Needless to say the Figure turns out to be Carlyle.


After more shenanigans, Nadine is rescued and THE TERROR is revealed to be Paul, the deaf and blind cripple, who is in fact Soo Ki, the dreaded leader of the Black Triangle, and The Lion-Faced Man turns out to be Kit Temple in disguise!  What’s more, when THE TERROR’s identity is revealed he throws himself into the vat of acid rather than face justice.


The play was cleared by the Lord Chamberlain’s office, though with some provisos: according to Nicholson’s Censorship of British Drama: “In 1927 [the Lord Chamberlain, the Earl of] Cromer reluctantly licensed a touring melodrama on condition that “the lion-faced man must not be made too monstrous or like an animal,” that his fight with the blind mute “must not be too realistic”, and that “the appearance of the ‘terror’ as described on page 11 must be modified.”  Typically he also attempted to absolve himself from possible criticism by making the manager responsible for ensuring that it must not be staged in such a way as to cause offence to the audience.”  You can still see the pencil marks on the passages in the typescript that the Lord Chamberlain's Office had problems with. 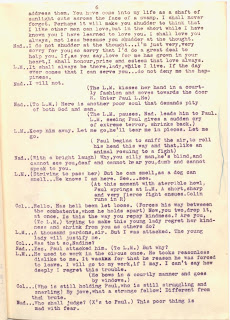 There are several parallels with the R.R. Ryan novels - freaks (though in this case they are disguised men) with animal characteristics and named accordingly,  vats of acid, nefarious laboratories, Morse code, are all in Freak Museum, while using capitals to emphasize the name of a creature was used in Echo of a Curse.

The play was the subject of an article in the Sheffield Independent on 13 October 1927, titled "Too Much Blood: Super-Thriller Banned."

"'The Black Triangle,' presented as the most thrilling of all thrillers, which was to have been presented by the Imperial Players in the Mexborough Hippodrome to-night, to-morrow and on Saturday, has been banned by the censor because it is too thrilling.

"Mr Rex Ryan, who owns the company, has received a wire from the censor forbidding the play to be produced in its current form.

"'I suppose it is the realities to which objection is made,' he said to the 'Sheffield Independent.'  "'The Black Triangle', the name of the author of which I cannot divulge, is a super-thriller.'

"There are ghosts, a deaf mute, two murders, a hanging, a head showing apart from its body, an iron face and plenty of blood and tears.  In addition to making ones hair stand on end it is mysterious.

"'The censor is a new man and I suppose his pet aversion is blood.  The old censor was concerned more about bare legs, but this one won't allow a hanging.  The play is not banned altogether, and when the censor has done we shall be able to produce it in its revised form.'"