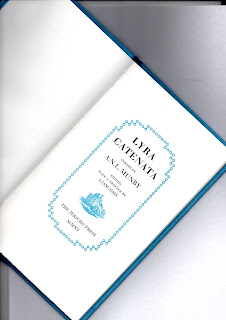 A N L Munby is known by ghost story enthusiasts for his volume of Jamesian tributes collected in The Alabaster Hand (1949, recently reprinted by The Sundial Press). They are amongst the best of the stories in the antiquarian tradition, and were written when Munby was a prisoner-of-war during World War Two. He later went on to become the Librarian of King's College, Cambridge, and a literary scholar and essayist who always writes with a fine mingling of learning and levity.

However, the Jamesian tales were not all that he wrote while he was interned. The Jericho Press has just published a new edition of Lyra Catenata: Verses, a very rare collection of poems also composed in the camp. Here is their description:

"The verses, always cheerful and clever, were partly written for camp dramatic productions, and they must have helped keep up his own and others' spirits. Tim published nine of his poems privately in 1948 under the title Lyra catenata, 'a chained song', in an edition of 35 copies. The present edition reprints these nine and adds two more: one from a 1947 anthology, and another ('Augustus Stokes: a cautionary tale') by kind permission of the author's son Giles Munby from among the unpublished verses in his notebooks."

There is an introduction by Liam Sims and the printing and production quality of the book looks admirable. Alas, this edition itself is only of eighty copies, and it is apparently already out of print at the Press: but copies may possibly be obtainable from the bookseller James Fergusson. Enquire at: jamesfergusson[at]btinternet[dot]com.
Posted by Mark V at 3:51 PM