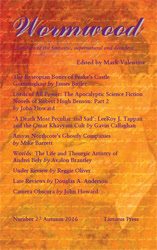 Mervyn Peake…the Gormenghast novels should be considered alongside 1984, Brave New World and Zamyatin’s We as the chronicles of a dystopian world, argues James Butler

R H Benson…it’s 1973. The Thames is controlled by a system of locks. There are electric news-sheets. Volors are used for civil transport and military purposes. John Howard looks at The Dawn of All, a future fantasy where the Roman Catholic church once more wields temporal power.

Amyas Northcote…20 years as a businessman in Chicago, then a retiring life as a Buckinghamshire squire – and one accomplished book of Jamesian ghost stories, closely considered by Mike Barrett

Andrei Bely…the author, according to Nabokov, of one of the four greatest prose works of the 20th century, a symbolist exploration of St Petersburg, beautifully evoked and hymned by Avalon Brantley

Thomas De Quincey…courted, with his fellow Romantics, “the strange, the bizarre, the transgressive” and was an avowed influence on Poe, Baudelaire, Dickens and Machen. Reggie Oliver reviews a new biography.

Arthur Ransome…wrote a guide to how to get to fairyland, and described the elementals to be found there. “A good idea wasted”, he later judged. Doug Anderson considers this and other forgotten fantasy and supernatural books.

H.P. Lovecraft…about the Cthulhu Mythos, “controversy abounds as every word is treated with seriousness reminiscent of those councils of the Early Church where anathemas were pronounced, banishments made, and exiles restored. For myself, I love it,” avers John Howard as he reviews a new study by S.T, Joshi, recent Mythos fiction, and other books from the independent presses.