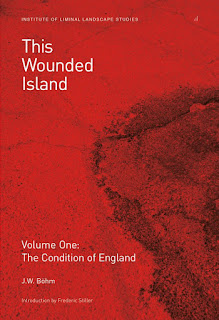 Whether in a café with murky coffee, staring at a plastic tomato with a congealed nozzle, or sitting in an obscure corner on a wrought-iron bench whose supports are in the form of a fork-tongued serpent, or passing through the stale clouds of furtive smokers crouched in the dank corners of anonymous office blocks, I have sometimes wondered what became of J W Böhm, the Berlin topographer and traveller.

Even among the few who have heard of his writing, there is no agreement about its qualities. It might be likened to the work of a more laconic Sebald or a less barbed-wire Sinclair. The austerity of his observations on urban landscapes, the wastelands of Europe, the unregarded edges, have led some to regard him as a gnomic visionary, while others believe he is simply a bewildered naïf.

The debate will not be ended by the unexpected publication of a welcome new work by him, This Wounded Island, Volume One: The Condition of England (Institute of Liminal Landscape Studies, 2017), translated by Michael Randolph and with an introduction by Frederic Stiller.

The book consists of terse accounts, each of a paragraph or so, of visits to towns in Southern England, together with black and white photographs. The observations are often tinged with melancholy, and sometimes – possibly inadvertently – brittle with a dry wit. The photographs alone are eloquent of the England he found, and the text, sometimes plaintive, at other times elliptical, conveys succinctly his sense of a country “haunted by uncertainty”.

These measured insights would alone be enough to make the book a valuable record of a certain time and place. But that is not its only resonance. For Böhm thinks that something has happened to the country he is traversing, and records the clues and signs, the rumours and murmurs that seem to hint at what it might be. He even believes he may have found some sort of a solution to the mystery of this vague malaise. While I do not think it will surprise seasoned Böhmians to learn that this is not how things end, they (and not only they) will certainly want to seek out this work of uncanny genius.