An Interview with Henry Wessells - Part 1 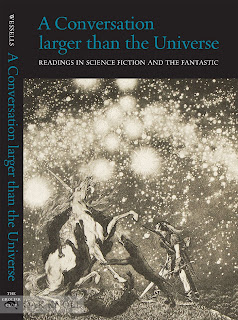 In our previous post we discussed A Conversation Larger Than the Universe - Readings in Science Fiction and the Fantastic by Wormwood contributor Henry Wessells. Henry kindly agreed to answer a few questions about the book.

Your book takes us back to imaginary voyages, often written with polemical or satirical intent (More’s Utopia, Swift’s Gulliver’s Travels etc), and to the Gothic novel. Do you think this sort of continuity is important to how science fiction sees itself? Couldn’t it rather be seen as a bold example of “make it new”, as a disruption?

To think about how science fiction is at its core about disruption or innovation is really useful.

To step back a bit before following that line: I subscribe to a very broad description of science fiction as encompassing fantasy and horror. I use science fiction in preference to John Clute’s useful notion of “fantastika” but that is a personal habit of speech. I do see the awareness of history, of the past as material for fiction, as a key component of the Gothic, which can be discerned from 1762, when Longsword appeared. The tale creaks, but everything is there: evil monks, menaced maidens, imprisonment in castles and monasteries, infant kidnappings, “secret malignity,” poisons, indirection and difficultly, and wild coincidences.

Labelling is inherently retrospective. There are any number of works that have been identified as “where science fiction begins” (the earliest being Lucian of Samosata, which I have not read). To make such an assertion — for Utopia, the Chemical Wedding, Kepler’s Somnium, or Hugo Gernsback — is a political statement, as Chip Delany reminds us.

For me, Frankenstein (1818) is where science fiction emerges from the Gothic. The innovation is in the extrapolation from science, and the boldness to create life from dead parts. The creature is not an automaton or doll but a sentient individual capable of self-education and the acquisition of language (and a vegetarian, too!).

Mary Shelley grew up in a literary household, her father William Godwin wrote Things as They Are, the bleakest late Gothic novel of persecution. When Mary wrote a novel, how natural to adapt the epistolary form and other trappings of the Gothic mode. And yet the subject matter and intellectual concerns of Frankenstein mark the novel as something new, a gate once opened and not to be closed again.

The late Brian Aldiss was a bold advocate for Mary Shelley as the origin of science fiction, but he was certainly not the first to articulate the importance of Frankenstein in science fiction. For example, Frankenstein is one of the earliest novels recorded in the 1953 bibliography “333”.

I suppose that as a reader I am interested in two aspects of a book: innovation, what is new, and “filiation,” how it relates to earlier works. I use Philip Gove’s very useful term, from The Imaginary Voyage in Prose Fiction (1941).


And yet it could be argued that pretty much up to cyber punk, science fiction used fairly conventional storytelling forms to explore its unconventional themes. Why wasn’t there a Modernist science fiction – or was there? What experiments in form or style do you see?

One of the joys of science fiction is the ability to move unflinchingly through time and space: and the knowledge that the reader will follow. And so this will be a slightly roundabout way of getting to the question of modernity and the fantastic.

Science fiction is a living literary mode that is perpetually open to change (sometimes to the dismay of readers who can no longer keep pace with all the books). In the flood of new work, sometimes older works are overlooked. As a reader, I am often drawn to such “forgotten” books. Some are very much worthy of rediscovery.

Take Richard Jefferies' After London (1885). Jefferies removed London from the face of the earth and wrote a two-part tale of what one might call the Day after the End of the World. The first part is nature writing of a formally innovative kind: not explaining the cataclysm but observing the consequences. Nothing else like it. And if the second part takes the shape of a boys’ adventure tale, it is still recounting events hundreds of years after the defining event (and that part of After London is the archetype for all the neo-feudal futures to come). Science fiction does sometimes evolve new forms in the struggle of the story to be told.

A year or so ago, while I was writing the chapter on Jefferies and others, Peak Victorian (published in Wormwood 29), when I would ask people if they had read Jefferies, even well-read people often looked at me with puzzlement. Even when I met people who knew Jefferies’ nature writings, they had never heard of After London. Yet in the same week that Wormwood 29 appeared this fall, the TLS reviewed a new scholarly edition of After London edited by Mark Frost for Edinburgh University Press. Steam-engine time for Richard Jefferies.

Now to think a bit more directly about literary modernism and the fantastic. Heart of Darkness is an early Club Story, and the apotheosis of the form. Just look at John Clute’s A Darkening Garden (2007) to see how his thinking about Conrad developed in the decade after the Encyclopedia of Fantasy.

Hope Mirrlees was a contemporary (and friend) of T. S. Eliot. Virginia and Leonard Woolf published her Paris a Poem (1919), now seen as one of the antecedents of The Waste Land (1922). As Michael Swanwick observes, Lud-in-the-Mist “is a dissident work, written in full awareness of what the proper literary writers were up to, and in its refusal to go along with them daringly defiant.”

Lord Dunsany, whose early work had close ties to W. B. Yeats and Lady Gregory, wrote novels of fantasy in sonorous prose in the 1920s. The King of Elfland’s Daughter (1924) describes the forging of a magic sword from thunderbolts with a monstrous, unequivocally post-war simile: “like the evil pool that glares when thermite has burst.” His 1933 novel The Curse of the Wise Woman is tale of rural Ireland and the magic of the red bog set mostly in the 1880s. Except that it is a retrospective tale narrated by an Irish consul in an unnamed Balkan country, and within the first three chapters, Dunsany specifically uses the words “silence,” “exile,” and “cunning”: he was not unaware of modernism.

Certainly there are strains of fantasy that are conservative and even hostile to literary change. For all his cosmic philosophical viewpoint, H. P. Lovecraft rejected Eliot’s modernism and aspired to eighteenth-century English literary ideals; and the American pulps did not reward literary experimentation. In many ways the pulps operated in defiance of modernism. Science fiction was never at a distance from literary activity. Look at Shelley or Wells. Literature never excluded science fiction until it excluded itself.

Things began to change in the late 1940s. Anthony Boucher encouraged literary quality in the works selected for The Magazine of Fantasy and Science Fiction, and he was the first translator of fiction by Jorge Luis Borges into English. James Blish and Damon Knight raised the standards of literary criticism in American science fiction. But it is really with the New Wave of the early 1960s that the learned or self-imposed isolation of science fiction collapsed.

Writers such as J. G. Ballard and Tom Disch and Joanna Russ asserted literary excellence as inseparable from the aims of science fiction. And for formal innovation, Pamela Zoline’s “The Heat Death of the Universe” (1967) is still pretty dazzling. William Burroughs was familiar enough with the tool-kit of science fiction to add it to his cut-up machine in the early 1960s: think of Nova Express and The Soft Machine. Science fiction writers of the 1980s such as William Gibson and Rudy Rucker were conscious of these writers when they burst on the scene.