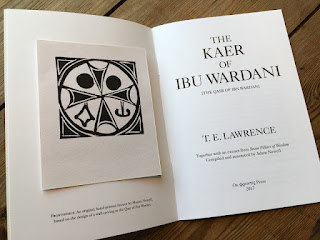 "Between Aleppo and Hamath the train drags over a monotony of lands, barren to the unskilled eye, but hiding nevertheless in folds villages of clay-domed houses, and black tents . . ."

Penrith, Cumbria, has two excellent second-hand bookshops. One of them, in an architectural salvage yard, is called Withnail Books, after the film, and the owner tells us: “I collect books. I’ve got too many of them. So now I’ve opened a bookshop by mistake.”

He also publishes occasional well-designed opuscules of rare literature, and has just announced The Kaer of Ibu Wardani by T E Lawrence. This is an early essay, not easy to find, contributed by the 23 year old Lawrence to the Jesus College Magazine, Oxford, where it was published in January 1913. It describes a visit to the desert ruins of a Byzantine palace.

It is offered in a strictly limited edition of 70 hand-numbered copies for sale, with an original, hand-printed linocut frontispiece. The interior is set in Lawrence's preferred font Caslon, with a recreation of the striking decorated capitals designed by Edward Wadsworth for the 1926 Subscriber's Edition of Seven Pillars of Wisdom.

The contents include, as well as the full text of 'The Kaer of Ibu Wardani', an extract from Seven Pillars where Lawrence recalls his visit to the ruins, plus a 'Note on Fonts' and annotations by Adam Newell, with supporting illustrations.