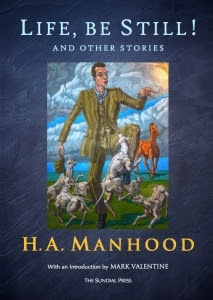 I think it would be fair to say that in all my reading and book collecting I have rarely come across so individual, so curious and so enigmatic a writer as H A Manhood. Much praised by his mid 20th century contemporaries for his piquant tales, he eschewed the literary life and lived in a railway carriage in a field in Sussex, growing his own food and brewing his own cider. His tales usually have rural settings and characters, yet they also have a strong folkloric and semi-mythic aspect. Most of all, their style, vocabulary and in particular imagery are like those of no other writer.

After a period of some acclaim and the respect of eminent authors such as John Galsworthy, Henry Williamson, Hugh Walpole and H. E. Bates, Manhood's work went out of fashion and by the Nineteen Sixties he had pretty much given up trying to sell new work. He settled down to continue his life of near self-sufficiency. That neglect has continued for some decades since, until a small number of readers began to talk about his work and quietly look out for it.

Life, Be Still!, just published by The Sundial Press of Dorset, is a selection of twenty-nine of his finest stories, which should give new readers a good sense of his work. This volume aims to introduce readers to a craftsman-writer with the skill to surprise and delight even the most jaded connoisseur, through the freshness and succinct aptness of his phrasing; and to celebrate an author who had the human insight to present the tenor of entire lives in miniature, in the telling of a single incident.

The Sundial Press also hope to publish, over time, each of Manhood's original seven story collections.