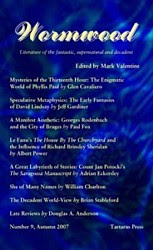 In his study Charles Williams – Poet of Theology (1983), the poet and Cambridge academic Glen Cavaliero included a brief end-note about the novels of Phyllis Paul. This was probably the first time anyone had given them any attention for some years. Later, in his study The Supernatural and English Fiction (1995) he devoted seven pages to her work, and indeed has said it was largely for her sake that he wrote the book, as an opportunity to write further about her.

Glen also wrote a masterly analysis of Phyllis Paul’s work for Wormwood 9, ‘Mysteries of the Thirteenth Hour: The Enigmatic World of Phyllis Paul.’ He began: ‘Phyllis Paul (1903-1973) was that rare creature, a puritan with a passionate and colourful imagination', and noted that 'running through all her novels is an undercurrent of the supernatural: her concern is not so much with psychological issues as with those of the spirit.’

Alerted by his interest, a few collectors had begun to look for her books: it was the note in the Williams book that started me on my own quest for them. They are not at all easy to find. Even though they were issued by major publishers this must not have been in very large numbers, or else (or as well) they were not the sort of books people kept. I remember my joy at finding two of them in a bookshop in St Helier, Jersey, but they remained difficult to discover and her last, and rarest, still eludes me. And that is not the only elusive aspect pf Phyllis Paul's work.

When he first became interested in Phyllis Paul’s books, Glen wrote, via her publisher Heinemann, to her solicitor to enquire about her estate. Her main legatee, aside from a substantial donation to a campaigning animal charity, the League Against Cruel Sports, was a friend, Miss Lydia M Lee of Tadworth, Surrey. The solicitor also gave the very interesting information that Phyllis Paul had left an unpublished novel, 'Hedera', which had been rejected by Heinemann and Chatto & Windus. The title appears to refer to the botanical name for ivy. He had sent the manuscript to Miss Lee. Glen therefore wrote to her in January 1980 to ask about this, but sadly his letter was returned 7 days later, stamped 'return to sender' and 'deceased'.

Naturally this was tantalising. Could there still be an unseen novel by this remarkable writer in existence? Guided by Glen’s previous research, I have spent some time trying to trace Miss Lee’s own estate, which I established had been left to a niece, the heir (so to speak) of Phyllis Paul’s heir. With a clue discovered by Doug Anderson, I was recently able to make contact with them and received a kind reply. Unfortunately, Miss Lee’s legatee regretted to advise that they did not know anything about the lost book: it did not survive among her effects.

The bleakness and pessimism of Phyllis Paul’s work ought perhaps to have prepared us for such an outcome, but I continue to nourish the slim chance that perhaps Miss Lee might have entrusted the manuscript somewhere else – some library or university or even church or chapel perhaps, where it may still reside, obscurely catalogued. It is, to be frank, unlikely, but we can hope.