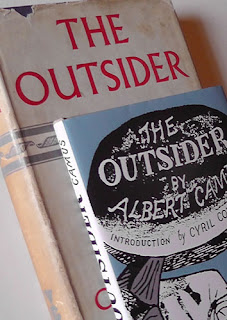 A few years ago any use of the term Outsider with reference to literature would probably have been an allusion to Albert Camus and his 1942 novel L’Étranger, often translated as The Outsider, or to Colin Wilson’s 1956 study of existentialist literature of the same title which explored the idea of outsiders and their place in society. Of course, definitions vary widely, and outsiders have featured in all forms of writing down the ages, but Outsider Literature has recently become a term that some have applied not to characters or themes in books, but to certain authors.

One blog online has a post about Outsider fiction that describes it as: ‘. . . a cool new genre that we’re hoping will take the world by storm' (www.patricialynne.com, 12th August 2014). Lyndall Gordon’s book Outsiders: Five Women Writers Who Changed the World (2017), was widely reviewed and has led to some discussion of what really constitutes Outsiders. (After all, three of the writers—Mary Shelley, George Eliot and Virginia Woolf—were well-published in their time.)

Of more interest to readers and collectors of genre or non-mainstream writing is the use of the term Outsider with reference to curious books from the past that have gone unappreciated, especially when their authors have often lived non-conventional lives. Wormwood contributor Adam Daly has recently published two volumes of The Outsider-writer with The Paupers' Press, containing essays about authors whose obvious similarity is simply that they are not well-known in the mainstream. The term Outsider Writer is applied on Wikipedia to Jean-Pierre Brisset, although it does not yet hyper-link to a dedicated entry on the subject. However, an Outsider Literature/Writer page is inevitably on its way . . .

These different applications of the terms Outsider Literature or Outsider Writer appears to have been inspired, in part, by the Outsider Art movement, which has become a successful marketing tool promoted by specialist galleries, art fairs and magazines, and while it is still contentious, it has become widely accepted. It would appear to be a good model for assessing what constitutes an Outsider in literature, and it is worth offering a little background.

Outsider Art was a term first used by the critic Roger Cardinal (Outsider Art, Praeger Publishers, 1972) when searching for a synonym for Art Brut (itself coined by French artist Jean Dubuffet (‘Place à l’incivisme’, Art and Text, No. 27, December 1987–February 1988, p. 36), referring to art undertaken outside the purview of the art establishment. Dubuffet provided a definition of ‘art brut’ that is instructive, recognising only:

‘Those works created from solitude and from pure and authentic creative impulses—where the worries of competition, acclaim and social promotion do not interfere.’

Dubuffet argued that true art brut was ‘more precious than the productions of professionals,’ and the idea was taken up by the Outsider Art movement. However, appreciation of all art is to some degree subjective and the movement claims to be at pains to keep itself free of artists who have simply failed to make the grade. In the tradition of the established art world, certain respected galleries and critics have become gatekeepers, but that is itself problematic: it can be argued that the very term Outsider Art when conferred by this new establishment offers recognition to favoured artists and must therefore mean they have been gathered ‘inside’.

Outsider Literature does not yet have its gatekeepers, although there are some commentators, collectors, and book dealers who are beginning to recognise the classification. There is, as yet, no manifesto or definition, but, perhaps Outsider Literature can take its cues from Outsider Art (while recognising that they are not completely analogous—for example, the long tradition of Art Schools is not replicated in contemporary creative writing classes.)

One celebrated Outsider Artist who should be able to help us define the Outsider Writer is Henry Darger (1892-1973), because his drawings and watercolour paintings illustrate his posthumously discovered fantasy manuscript The Story of the Vivian Girls . . . —if he was an Outsider Artist, then he must also have been an Outsider Writer. Another recognised Outsider Artist who also wrote is Adolf Wölfli (1864-1930), and the examples of Darger and Wölfli suggests that the Outsider Writer should be defined by work that is self-taught (naïve), driven by a deep-seated need to write rather than publish, and it should not have been recognised by the literary establishment at the time of composition.

In addition to these considerations, to be taken at all seriously as a classification, Outsider Writing should be at pains to be like the Outsider Art movement and keep itself free from writers who simply fail to make the grade.

(Part Two of this blog post will consider a number of writers who might be considered Outsiders.)