It's been a few years since I posted some contemporary notices of Rex Ryan's death in 1950.  Earlier I had posted a number of notices about him in an attempt to put together some biographical information about this elusive author and playwright, including his strange upbringing with a jailbird father (for what now would be considered white collar crime) in a large house with a "Buebeard's Chamber".

Browsing the British Newspaper Archive, a few more newspaper references have appeared about him in the recently digitized South Yorkshire Times and Mexborough and Swinton Times.   The following article, dated 1 October 1926, as well as including a rare photograph, has some new biographical information: 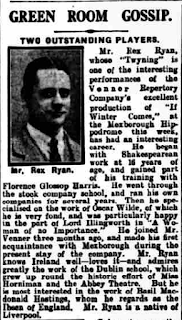 
“Mr Rex Ryan whose ‘Tryning’ is one of the interesting performances of the Venner Repertory company’s excellent production of 'If Winter Comes,' at the Mexborough Hippodrome this week, has had an interesting career.  He began with Shakespearean work at 16 years of age, and gained part of his training with Florence Glossop Harris.  He went through the stock company school, and ran his own companies for several years.  Then he specialised in the work of Oscar Wilde, of which he is very fond, and was particularly happy in the part of Lord Illingworth in ‘A Woman of No Importance.’ He joined Mr. Venner three months ago, and made his first acquaintance with Mexborough during the present stay of the company.  Mr Ryan knows Ireland very well – loves it – and admires greatly the work of the Dublin school, which grew up round the historic effort of Miss Horniman and the Abbey Theatre.  But he is most interested in the work of Basil Macdonald Hastings, whom he regards as the Ibsen of England.  Mr Ryan is a native of Liverpool.”

Another article, dated 21 October 1927, mentions a series of "crime plays", including "The Black Triangle", which I've written about before:

And another of 23 September 1927, which includes some interesting information about a series of performances, including "Maria Marten", the infamous murder in the red barn: