THE COMPLETE STORIES OF MARY BUTTS 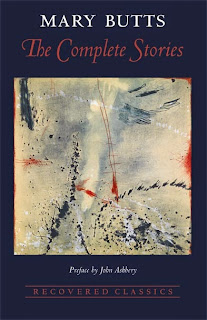 One of the last but most welcome publications of 2014 is The Complete Stories of Mary Butts, issued by Mcpherson on 15 December. After a long time in the literary shadows, Mary Butts' work has seen a revival in recent decades, with reprints of her novels and the first publication of her journal, and several critical studies. This year alone has also seen Mary Butts and British Neo-Romanticism: The Enchantment of Place by Andrew Radford and A Fractured Landscape of Modernity: Culture and Conflict in the Isle of Purbeck by James Wilkes, in which she features strongly.

As I said in my essay in Sacrum Regnum 1 ("Inner Bohemia - The Mystical Fiction of Mary Butts"): "Mary Butts is sometimes invoked as an associate of Aleister Crowley and Jean Cocteau, and as part of the wild Parisian-bohemian “Lost Generation” set of the interwar years, with a story and a life fuelled by drink, drugs, sex and the occult. But she was much more than this picturesque figure. She was an avant-garde, modernist writer whose work was yet also infused with a deep sense of tradition and of the past. She was an enthusiast of the work of M. R. James, championing him in an essay for the London Mercury, one of the first critical appreciations of his work. And she was also an admirer of the mystical fiction of Machen, E.F. Benson, and de la Mare. Most of all, her own work succeeded in uniting these two strands, the modernist and the mystical, with a force only otherwise seen in such achievements as Eliot’s The Waste Land, the alchemical poems of ‘H.D.’, or Malcolm Lowry’s work."

I commented: "some critics consider her real forte was the short story, and her piece “Mappa Mundi” has been particularly praised for the way it mingles inner and outer worlds, the streets of Paris becoming also a terrain of hidden dimensions: it recalls her own genuine experiences. Her characters struggle to explain it: “An extraordinary, a unique sense of all sorts of mixed pasts, a sense of the ancient city and all the fury of life that went to make it…that and something else. Like something out of which they all came. A matrix, which is Paris and the secret of Paris.” This sense of overlapping realities was not only known in London and Paris, but in Dorset, in Cornwall, in the country: the implication is that it might be encountered anywhere."

This edition of her complete stories should at last see Mary Butts take her place as one of the most original, thoughtful and innovative writers of supernatural fiction in English in the 20th century.