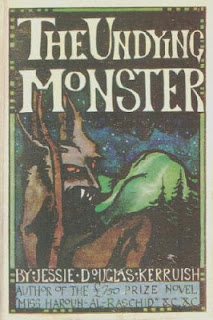 Jessie Douglas Kerruish (1884-1949) is best known for her splendid occult detective and werewolf yarn The Undying Monster (1922). She had earlier won a prize leading to publication of her first major book, Miss Haroun-Al-Raschid (1917) and was the author of other fantasy-inflected fiction.

There does not seem to be very much biographical information about her, but some time ago I found a couple of interesting references from an online version of the 1916 issue of a journal devoted to Manx history. This was ‘Mannin, a Journal of Matters Past and Present relating to Mann (sic). Published by Yn Cheshaght Gailckagh, the Manx Language Society.Editor: Miss Sophia Morrison. Printer: L. G. Meyer, Douglas.’ The two notes give some insight into the Manx origins of her family, and the inspiration behind her fiction.

The first was an editorial note:

“Miss Jessie Douglas Kerruish (see correspondence p. 433) writes an interesting little note on her own life in The Weekly Tale-Teller (January 8th). Miss Kerruish is the daughter of Captain Kerruish; her family, she says, have been travellers and sea-farers. She herself was born at Seaton Carew in Durham, and was brought up ‘on the smuggler and slaver tales, wrecks and legends of witches, warlocks, ghosts, submerged forests and sea-swallowed lands that colour the mental atmosphere of the wild North Coast.’ She served her apprenticeship to literature by writing for Stead’s Books for the Bairns and The Weekly Tale-Teller introduced her to a grown up audience.”

The correspondence from her was as follows:

“MANNIN has quite opened a new world to me, for I had no idea of how the Manx abroad kept so closely in touch through your Society, or how strenuously the Society is preserving everything connected with Mann that it can save. As to the paper itself, it is admirable, both as to its form and contents. We are very much interested in the paper by Mr. Kerruish, of Cleveland, Ohio, some of our people emigrated to America about that time (1827) and later.

You ask to what branches of the Kerruishes I belong. To one of the too numerous to mention, I fear! My father died when I was a girl, and all that I recollect of his family information was that he came from Lonan, and that his grandfather protected John Wesley from a hostile mob and entertained him during his stay on the Island. Some one ought to write about John Wesley and the Island — and might link it up with smuggling.

Your remarks about smuggling amused me very much; down here they used to be great runners — see Kipling. They were rather more open about it than at most places ; and an anecdote is cherished to the effect that the clerk waited on the parson one Sunday with the announcement, ‘There won’t be no service on Sunday, sir, there’s no room for the people, the church is full of brandy and the pulpit full of tea.’”

The reference to "down here" is to Sussex, where she had made her home, and where The Undying Monster is set. Jessie Douglas Kerruish died at Hove in 1949. As the above brief letter shows, she seems to have had a spirited and vivid character, reflected in her exuberant books.