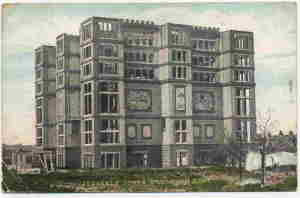 What is the biggest secondhand bookshop in Britain? I don’t think anyone holds the undisputed claim and maybe it doesn’t matter. These ten are all very big, and all well worth a visit. I suspect only a trained librarian or archivist could estimate the number of books very cannily. So the following is simply a summary of some of the contenders, either overall or in one country or region. Other suggestions are welcome.

Astley Book Farm, Warwickshire - “the largest second-hand bookshop in the Midlands” according to its website, and that sounds right. “We hold about 75,000 books” they note. One large former farm building, with two outhouses. Also has a café.

Baggins Books Bazaar, Rochester – “England’s Largest Secondhand and Rare Bookshop”, it proclaims, though some visitors are not so sure. Note that this doesn’t therefore challenge the two big bookshops in Hay-on-Wye, which is (just) in Wales. “More than half a million…” books says a local press report from November 1996 quoted on the Bazaar’s website. Over two floors.

Barter Books, Alnwick – cautiously describes itself as “one of the largest secondhand bookshops in Britain” In a former railway station, it has one entrance room and then a great hall stretching out quite a long way (and with a model train set traversing some of the shelves). However, it is only on one floor. Also has a buffet.

Book Barn International, Temple Cloud – an internet seller whose depot is also open to browsers, described as “one of the largest used bookshops in England” with “hundreds of thousands” of books, very cheap. Café. Could certainly claim to be the largest in the West.

Book Case, Carlisle – makes no claim of this kind – the owner was diffident when I said it must be in the running, but it certainly is. Occupies an entire large Georgian house, rambling over three floors, with a warren of rooms. Also has a café, and records in the basement.

The Bookshop, Wigtown – claims to be “the largest second-hand bookshop in Scotland,” (though that is sometimes disputed) “with over a mile of shelving supporting 100,000 books”. An interesting old town house with about four large rooms, some passages and a landing.

Richard Booth’s Bookshop, Hay-on-Wye – two long floors and a cellar, much brighter and better organised under new ownership and now with a café and cinema, but possibly with a certain loss of quantity.

The Carnforth Bookshop, Carnforth – has never claimed to be the biggest but has a painted sign announcing 100,000 books. Two floors, though under recent ownership the stock has been winnowed down a bit, particularly the vintage hardback fiction.

Cinema Bookshop, Hay-on-Wye – probably the largest bookshop in Wales, over two very large floors in the town’s former cinema and with no space spared. Their website says the stock “runs to 200,000 volumes on all subjects.”

Leakey’s, Inverness – a characterful bookshop in a former church whose stock has been estimated at over 100,000 books, and which may compete with The Bookshop, Wigtown for the title of Scotland’s largest.