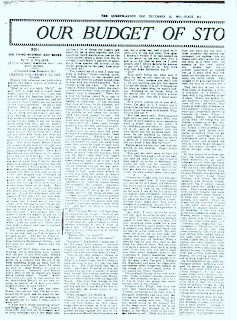 The lost race novel set in Australia had a particular vogue in the late nineteenth and early twentieth centuries. Probably the best known example is Erle Cox's science fiction classic, Out of the Silence (1919), but well known authors of weird and fantasy fiction like Rosa Praed and Ernest Favenc also dabbled in the genre. A particularly bizarre example is Austyn Granville's The Fallen Race (1892), about a strange spheroidal race evidently descended from kangaroo-human hybrids.
The Australian author of colonial adventures, William Sylvester Walker (1846-1926), wrote a lost race novel called The Silver Queen (1908), which has attracted some academic attention in recent years. Walker, who often wrote under the pen name "Coo-ee", was the nephew of the great colonial writer, "Rolf Boldrewood", who wrote Robbery Under Arms (1888). Late in life Walker moved to Scotland and died at Oban in Argyllshire in 1926.
His last work appears to have been a lost race novel that was published in The Queenslander in 1924-25 with the unlikely title of Koi; or, The Thing Without any Bones. It traces the efforts of an Australian adventurer and bushman, Mark Payton, and his love interest, the rich, beautiful and ambitious Brenda Sardrou, to foil the machinations of the evil German Jew named Solomons, an international spy, self-made millionaire and dabbler in the occult. Solomons is the direct descendant of Ben Suleiman, who two thousand years earlier led an expedition out of Mesopotamia to northern Australia where he established a new civilisation based on Egyptian magical beliefs. Koi is the Soul Shadow, a disembodied spirit that attaches itself to a living person and only departs during sleep, sickness and death to wander in other places - aboriginal descendants of the ancient race are accompanied and aided by their Koi. Solomons plans to return to northern Australia and set himself up as ruler of the revived kingdom - a European invasion of the Commonwealth, no less! Heady stuff: a spectacularly over-the-top fantasy.
Posted by James Doig at 5:03 AM 6 comments: