A 1963 study, The Modern Novel, by Paul West covers all the authors you would expect, but is also surprisingly acute about those not then so well known – Ford Madox Ford; Henry Green; Denton Welch; Ronald Firbank; Malcolm Lowry. This is the mark of a critic not afraid to venture beyond the established canon. He also briefly mentions some of the more interesting books by newer authors he has seen recently. One of these was Julian Fairfield by A.O. Chater (1961).

It is, he says, a book “in which what is said melts into the reactions the words produce.” Further, “in some ways Chater’s novel reverses the method of Nathalie Sarraute, who combines pre-speech in all its inchoateness with uttered words”. “Naturally,” West continues, “such explorations lead to muddle, imprecision, lack of pointing…and turgidity.” “They also,” the critic concludes, “lead to concentration on episodes to the neglect of overall structure – an error into which Proust falls.”

This doesn’t look very likely to send the reader away to pursue Chater’s title. So it may be as well to quote from the dustwrapper’s valiant attempt to describe the book: “Twenty years old, this novel’s hero decides to free himself from domestic claustrophobia and launch himself into a new life…He boards a train to an unknown town in the north, assumes the name of “Julian Fairfield” and proceeds with innocence and confidence to deny his past and recreate a present.” The word ‘recreate’ here is a very sly and apposite one, for ‘recreate’ is exactly what Fairfield does: the new present he encounters in the town turns out to be an exact shadow of his former life, in a carefully crafted, subtle and ingenious series of moves by the author. The town itself is not in the least fantastical: it has a castle, cathedral, inn, factory, railway station, and yet the way that Fairfield encounters them, and how they mesh with his destiny, has an unreal dimension to it.

The rest of the dustwrapper’s narrative sticks cautiously to observable facts, until it ends by invoking the author’s intent: “It is A.O. Chater’s concern to probe his hero’s motives, and to question the understanding and the control that he has over these events. Julian Fairfield is an absorbing first novel by a young writer, an exciting and mature study of a soul in flight – a coward soul.” “Absorbing”, if not exactly distinctive, is a fair word to use about the book; “exciting” is a lunge too far. The literary allusion to a “coward soul” does not help very much either: the book’s “hero” is a young man of apprehension and delicacy, who often faces defeat, but “coward” is too bold and unkind an epithet to fling at him.

There are a few books whose “atmosphere”, to employ a vague and yet useful term, is like that of Julian Fairfield - Peter de Mendelssohn’s The Hours and the Centuries (1944); and David Wheldon’s The Viaduct (1983). They achieve the effect of making an apparently naturalistic narrative seem dreamlike and strange, rather like a plainer de la Mare. It is perfectly possible that some readers may not see anything in Chater’s book at all: at times, as I read it, I found myself baffled by its calm, careful, simple style and rather remorseless mapping out of a particularly predestined plot. Still, I persevered: and the book has persevered with me, quietly insinuating its images and qualities into my thoughts ever since. And so I still cannot quite be sure whether it is a masterpiece or an interesting failure.

A.O. Chater seems to have written a few short stories as well as his novel, before becoming a full time botanist, a Fellow of the Linnean Society, and writing several titles in this field. In 1988 he was (as Arthur O. Chater) in the Department of Botany at the British Museum. It is recorded that he “embarked upon an investigation of the ants of Cardiganshire in 1986” and he also reported to a survey sightings of the pine marten. Whether his studies meant that he abandoned fiction, or whether there is somewhere a drawer-full of unpublished Julian Fairfields, I do not know. His single novel is a sort of English provincial Kafkaesque, deftly constructed so that it is a mirror image of itself, very plainly told (almost too plainly) and with an underlying tone of dejection and awkwardness: unusual, intelligent, possibly needing some greater strangeness to make it really work, and yet for all that a peculiar and memorable book.
Posted by Mark V at 2:20 AM 2 comments: 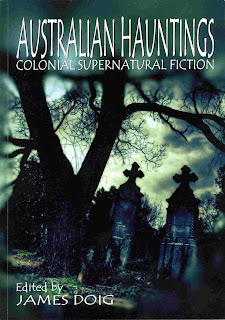 The third and final volume of James Doig's excellent trilogy of historical Australian supernatural fiction has now come out from Equilibrium Books.  Following Australian Gothic (2007) and Australian Nightmares (2008), James put out a bargain-priced sampler collection with Wordsworth Editions, titled Australian Ghost Stories,  that would get more distribution in the US and the UK.  At last James has now finished the trilogy with Australian Hauntings: Colonial Supernatural Fiction.  What makes this volume more special is the long introduction (about 20 pages) about what makes colonial ghost stories, how they work as stories in relation to specific aspects of the Australian experience or environment. A fine capstone to James's trail-blazing explorations of a specific area of supernatural literature that had been too little mapped.

The three volumes from Equilibrium Books can be ordered via their web bookstore here. James has also just published an article on "Australian Ghost Stories" in the June 2011 issue of the quarterly magazine of the National Library of Australia, which you can see here, as well as download a pdf of the article (which has some very interesting illustrations).

Another resource of interest is the post on "Australian Horror History" at the website of the Austrlian Horror Writers Association.  There you can find the contents listed from several anthologies published over the last thirty years which cover the field of the Australian supernatural story.  Especially worth noting is the list of "Recommended Australian Horror Stories to Circa 1950".
Posted by Douglas A. Anderson at 10:43 PM 3 comments: