Brothers of the Blood by J.P. Quaine 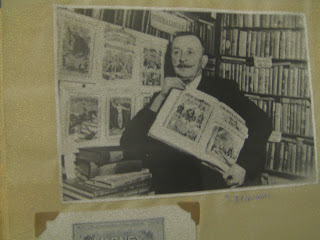 Brothers of the Blood (Biblionews: Monthly Letter of the Book Collectors' Society of Australia, Vol 4, No. 5, April 1951)

With a pang of regret I must admit that the good old Cult of the Blooddrinkers is now but a memory! Most of the stalwarts who laughingly agreed when I suggested the gory title have been added to the bag of the biggest collector of all – Death! The passing of my old friend Barry Ono in 1940 was the beginning of the end. A new school has arisen. The “Old Boys” of today are the lads who read Magnets and Gems, Plucks and Union Jacks, and they have little in common with the few old fogies worshipping at the shrine of Jack Harkaway and Sweeney Todd. Nevertheless, the modern “Old Boy” has established his cult on efficient lines undreamed of by the pioneer “blood” collectors. We certainly used Joseph Parks’ “Collector’s Miscellany” (published in Yorks.) as our official organ but even the redoubtable Joe has gone over to the new old uns. References to our ancient loved ones in that periodical are paltry compared with the paeans of praise sung for the antics of Billy Bunter.

They have a president and an executive committee, a “digest” and an anuual “Who’s Who”, and a coat of arms. This is divided into four quarters: one with a book, a cricket cap and an inkpot; another with a pipe and magnifying glass; the third has a pistol and a mask and the fourth a slouch hat, bandolier and revolver. The motto is Puer manebit- the boy shall remain. So, while we old codgers are dying off, these boys who will never grow up, with the exception of a few octogenarians, range from men in their forties to boys in their teens. The British pontiff of this organisation is a very energetic Bunterite named Herbert Leckenby. In Manitoba, Canada, William Gander (old enough to cling affectionately to the early bloods), publisher of the Red River Rambler, devotes another little journal, Story Paper Collector entirely to “dreadfuls”. And right through the English speaking portion of the American continent, from the Red River to the Rio Grande, there are numerous groups, mostly Dime Novel Collectors, who also hanker after the British Bloods. They, too, issue publications devoted to their hobby; to my way of thinking, the most important of these is the Dime Novel Round Up issued by Reckless Ralph Cumming, the Sleuth of the Sierras, at Fisherville, Mass. USA. Ellery Queen, writer of detective thrillers, and Bragin, the well-known collector of bygone Yankee Bloods, formed a company some years back for the purpose of reprinting some of the rarer items in facsimile. These are sold to brother collectors at a dollar each. I have seen a couple and they were certainly masterpieces.

The practice of collecting and retailing old and rare penny weeklies began in England when George R. Sims, the playwright and novelist, introduced the hobby, though a bookseller named John Jeffrey had dabbled in the old publications as far back as 1890. But the real giant was Frederick Harrison, better known as Barry Ono, the vaudeville artist who pioneered the revival of old-time hits on the variety stage. He started his collection in 1906, when such oddments could be procured at moderate prices. His greatest competitor was a man named Frank Jay, who afterwards sold his lot at Brigand’s prices while the going was good. Ono, however, hung on to his collection which eventually reached over 6000 well-bound volumes. For fifteen years we corresponded with each other and swapped, wrangled, and exchanged Rabelaisian insults. I had the pleasure of entertaining him for a fortnight when he visited Melbourne in 1939 during a world tour. The following year he died of a heart attack brought on by the blitzing of Britain. His collection now reposes in that great book-mausoleum, the British Museum Library. [Ono’s collection is fully catalogued in James, Elizabeth and Helen R. Smith. Penny dreadfuls and boys' adventures : the Barry Ono Collection of Victorian popular literature in the British Library. London: British Library, 1998.]

Another oldtimer, Herdman, who was alsoa collector of old-plate, was murdered one night, in the middle of the thirties, by a burglar who was after the silverware. Herdman’s brains were bashed out, and the blood, appropriately enough, was splashed on the backs of a shelf of “dreadfuls”. So of the myriad pen pals with whom I used to correspond and swap lunacy, there remain but four alive! The before-referred-to Joe Parks of Yorkshire; Arget Harris, a sturdy old octogenarian of Brynnfrydd Road, Dowlais, Glamorganshire, who still lives in the days of Tymm Shon Catti (the Welsh Robin Hood); Henry Steele, a Cockney musician, and an expert on old London and its dark deeds, its bravos, swashbucklers, and cloak-and-dagger miscreants, and last, and most important ofall, John Medcraft. He is an Essex Hydraulic Leather Manufacturer in a large way of business, who has amassed the biggest collection in the world. He has runs of all the old journals, and practically everything that was issued that was issued in the penny weekly numbers between 1828 and 1900. His little lot runs into countless thousands; all mint copies, with startling coloured wrappers, and all the points of allure so dear to the heart of the collector. For be it known that the “blood” collector shares with his highbrow brother the desire for tall copies, wide margins and original wrappers. With Barry Ono’s collection out of the way, as aforesaid, Medcraft’s collection of “bloods” ranks first in the world.

South Africa has its group of collectors also. Every now and again overseas enthusiasts who know my weakness, send me copies of journals containing matter relating to the hobby. Of such is the Johannesburg Outspan which has featured several interviews with South African collectors. These have been written in the main by a brilliant scribe named Rosenthal. And in Australia Leon Stone, of Gordon, N.S.W., well-known as a collector of amateur journals, is also a modern “old boy” and is linked, through correspondence, with most of the overseas Billy Bunterites, including the creator of Bunter himself, Frank Richards. I think I have written enough to show that there are Brothers of “the Blood” in every country where there are men whoare still boys. Anyway, brother collector, don’t you think that he’s poorer man who never, in his boyhood, dabbled in “bloods”, and he’d be a poor collector who would not make just a little shelf-room for a Sweeney Todd, Varney the Vampire, Jack Harkaway, Deadwood Dick, or even Billy Bunter, Sexton Blake, and Nelson Lee. But I do regret the passing of the good old “Cult of Blooddrinkers”.
Posted by James Doig at 9:12 PM 2 comments: