If you don't know about the massive magazine index maintained by Bill Contento, you might want to.  It goes by the name of The FictionMags Index, but there are a lot more than just magazines with fiction indexed there, including a lot of small press journals relating to fantasy, horror and science fiction.  Bill just put up the latest update, which includes indices I submitted of all seventeen issues of Avallaunius (1987-1997), the old journal of The Arthur Machen Society, and all twenty-two issues (so far) of Faunus (1998-present), the journal of The Friends of Arthur Machen.  It's also been updated to contain the newest issues of Wormwood and Tolkien Studies, thus bringing the indices of these complete and up-to-date. The home page is located here.  You can search by magazine, article author, article title, etc. etc.  I find it very useful when I want to find which issues of Faunus had those articles on Amy Hogg, or in which volume of Tolkien Studies appeared the review of Douglas Charles Kane's Arda Reconstructed. The answers are only a few clicks away.
Posted by Douglas A. Anderson at 12:30 PM No comments: 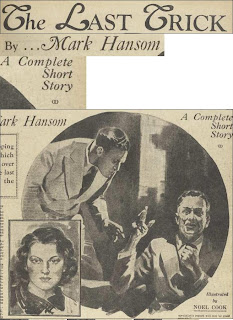 I've mentioned the enigmatic Mark Hansom before. In recent times Golden Age thriller publisher, Ramble House, has been reprinting the novels in affordable paperback editions. Hansom appears to have been particularly popular in Australia. The publisher, Wright & Brown, sent copies of its publications to Australian newspapers where they were reviewed or noted. A few examples of thumbnail Hansom reviews are given below. Such was Hansom's popularity that the Australian Women's Weekly published a short story, a crime thriller titled "The Last Trick", on Saturday 1 May 1937.
Reviews
The West Australian, Saturday 9 November 1935

The Ghost of Gaston Revere, by Mark Hansom. Wright and Brown, London. 3/6. From the publishers.

Conceived somewhat to the spirit ot Mary Shelley's 'Frankenstein,' Mr. Hansom's weird story concerns the in genious Dr. Gale's treatment of a patient's brain previous to an operation, that has the startling and unforeseen effect of letting loose a monstrous apparition on the world. The author is out to make his readers' flesh creep; but he a little overdoes it; and not everyone will have the patience to persevere with the book until Sir Bertram Knotts, the famous brain specialist, finally lays the unquiet spirit of Gaston Revere.

Labelled a "horror novel" in the publisher's blurb, the name is apt. A lightless ship in the Channel, a wrecked swimmer climbing on board, a man who plunges over the side to his death, are merely the preliminaries. These are followed by an introduction to the "Master of Souls" and a corpse which he partially revives, also the disembodied spirit of an ancient Egyptian woman, malignant and vile. With this setting follows a series of nerve-racking adventure sufficient to delight the heart of every lover of horror and crime.

The Beasts of Brahm, by Mark Hansom (Wright and Brown, London). Here be thrills a-plenty so long as one does not ask that the author should stick to possibilities. Mark Hansom exploits the macabre to the utmost. This tale opens with the finding of the dead and mangled body of a man in a lonely lane in Surrey. It is thought to have been mauled by an escaped wild beast, and the inhabitants live through a reign of terror wondering where the next blow will fall. The "horror," however, is something more loathsome than any wild beast. The mysticism of the East, magnified many times over for the purpose of the horror, is used freely until the accomplished Jeremy arrives on the scene to take charge, and free the district from its terrors.

THE BEASTS OF BRAHM, by Mark Hansom; published by Wright and Brown, London; price, 3s 6d.

"The Beasts of Brahm" is a good example of Mr. Hansom's work, which has come into prominence since the publication of "The Wizard of Berner's Abbey." The dead and mangled body of a man is found in a lonely valley in Surrey, and it is thought that he has been mauled by an escaped wild beast. The inhabitants find themselves in the midst of a reign of terror, which continues until one of their number who has a knowledge of Eastern mysteries discovers the solution. The plot is carefully constructed and the identity of the murderer is not revealed until the last.

In "The Wizard of Berner's Abbey," by Mark Hansom, published by Wright and Brown (London), the assertion of Paul St. Arnaud, the wizard of Berner's Abbey, is that will is the supreme force in the universe - that will can transcend even death - gives the keynote of this tale of mystery and horror. John Richmond, a young medical student, finds himself faced with the apparently hopeless task of freeing a girl from the power of a man who has departed from this life. The ghost of Paul St. Arnaud is finally laid, and the mystery is scientifically ex plained; but in the meantime those concerned pass through horrifying experiences - experiences that the reader shares because of the skill with which the story is told.

"The Madman," by Mark Hansom (Wright and Brown, London). Perhaps it was inevitable that the author of "The Wizard of Berner's Abbey" should turn to the theme of insanity for one of his novels, and in his latest book, "The Madman," he has treated this theme with a high degree of artistic skill, providing a story of unusual interest. The story opens with a piano recital given by Margaret Kerr, a famous artist, where her fiance, a solicitor, learns that an old man has claimed to be a distant relative. He finds that this person is one Silas Goser, destined to be a client of his firm. The career of the mad man provides some exciting episodes before he is finally unmasked in a sensational climax. The narrative is absorbing and well written, dominated by an atmosphere of horror. There is a strong human interest in Mr. Hansom's work-an interest that reaches its height in the superficially casual but tragic conclusion.
Posted by James Doig at 5:35 PM No comments:

In the file of letters from the publisher Peter Davies to Sarban, there’s a brief letter from Nico Davies of 24 November, 1960, where he recommends to Sarban another of his authors, Kathleen Sully, citing a few books in particular. He says: "I'm glad you found things to like and admire in "Skrine". As I told you, I am sure, she is one of my favourite authors. Of the eight books of hers which have come our way - there is a new one scheduled for next February - there are to me splendid things in each. If my favourite is still her first, "Canal in Moonlight" ["Bikka Road" in the USA - MV], "Merrily to the Grave" and "Skrine" are not far behind."

I sent off for a few, and have read the one he sent to Sarban, Skrine (1960). It is set in a post-apocalypse world, very clearly and tautly told, and follows one man through hunger and desolation to a surviving community where by chance he is taken as a healer. At first feted, he comes into conflict with the boss of the town, and the wavering townsfolk turn upon him. Uncompromisingly bleak, it certainly lowered the spirits while at the same time eliciting admiration for her hard style and dark vision. Her other books seem no more sanguine in outlook but almost as good in her terse composition. Skrine, at least, has a possible supernatural element, in that the character sees the figures of those he has had to kill to survive, although a gap is left for these to be hallucinatory.

Kathleen Sully is another author whose work seems to have almost entirely passed out of view but on the strength of the books I've read so far she could attract the kind of devoted following that Phyllis Paul has acquired thanks to the efforts of Glen Cavaliero. They share a highly pessimistic, bleak outlook, although Sully also has an austere and remorseless prose style.

It was the resourceful Doug Anderson, as so often, who uncovered some biographical details: “Kathleen Maude Sully was born in 1910, died in 2001 at the age of 91… She gave an interesting comment about her writerly interests (c. 1970s): "Main interest now and ever since I could think: Man--why and whence .... Have written since a child but stuff mostly too off-beat for publication. Interest in general: philosophy; art; realistic literature; dancing; swimming and diving; teaching;' diet and health--mental and physical; why the chicken crossed the road." “ One of her dustwrappers gives a long list of workaday jobs she has held: they look like bread-and-butter chores to sustain her while her real soul was in her writing.
Posted by Mark V at 3:25 PM 2 comments: 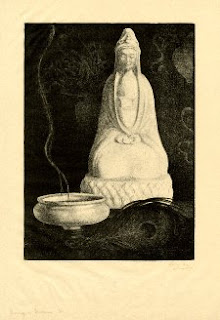 If we think the authors in our field are sometimes neglected, then they are positively feted compared with some of the illustrators. Quite a few of their biographical notices remark “very little known is about the artist’s life” or some variation on this. Amongst those of whom this is said is Henry Weston Keen (1899-1935), who illustrated a highly desirable edition of Wilde’s The Picture of Dorian Gray, as well as an equally admired book of Jacobean tragedy, Webster’s The White Devil & the Duchess of Malfi: and a few other books. The British Museum has a lithograph by him, ‘Ming & Incense’, in which the serenity of the idol and the slow tendril of smoke from the incense bowl are subtly conveyed, and a peacock feather’s black eye and faint tendrils are dimly delineated . He lived in London: and died of consumption, it is often said in Switzerland, and that seems (to judge from the usual sources) to be all we know of him.

I sent off for a copy of Henry Keen’s will. It is very brief, leaving six books of his choice to his brother, of 300 High Holborn, and the rest to Victoria May Barnes, who shared Keen’s then address, “Westwood”, Walberswick, Suffolk. The will was dated 25 June 1935: and he died the next day. The witnesses were R G Barnes of Southampton, and R E E Hadlow, a Merchant Marine Officer, of, Warley Lodge Farm, Nr Brentwood, Essex. The estate was valued at £208-13-9. When his brother registered the will, one month later, on 26 July 1935, he gave the farm address (in “Little Warley”) too: the witnesses were probably his friends. So it will be seen that Keen did not die in Switzerland, as some sources say, but in Suffolk: Walberswick was then a well-known artists’ retreat. Still, this does not tell us very much more and as the summation of the estate of a promising and subtle artist it has a certain poignancy. What lay behind that bequest of six books (evidently meant as a memento mori): why six?; and which six did his brother choose? What other books were there and what became of them? Who was Victoria May Barnes: lover, companion, nurse, friend? And what comprised that £208 estate (worth about £11,000 today)? Did it include a Chinese statuette (though not Ming) or a delicate incense bowl or were these copied from a museum or conjured from the imagination? What became of his unpublished drawings?
Posted by Mark V at 5:13 AM No comments: