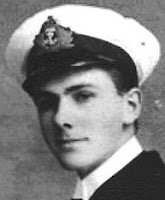 Reading in old copies of The Listener, the BBC wireless magazine, from the 1930s, I found, in the issue for 11 November 1936 (Vol XVI, No 409), a half-page review by Grace Wyndham Goldie, a regular columnist, of a radio play by the splendidly-named Horton Giddy. The drama was entitled ‘Off Finisterre’: and it was a ghost story.

The review begins by praising previous plays by Giddy, entitled ‘In the Shadow’, ‘Congo Landing’, and ‘Mary at Lochleven’. Goldie describes him as ‘that rare and valuable phenomenon, a genuine radio dramatist’, presumably as distinct from stage dramatists or short-story writers who adapted their works for the wireless. Each of the plays listed is good, she says, but more impressive is that each is a vast improvement on the one before, the sign of an increasing ‘mastery of radio technique’. But he is not solemn or pompous: ‘He is an entertainer, a teller of stories which have some thrill or excitement in them’. The first of those listed was about ‘ships waiting for a declaration of war’, the second about ‘an aeroplane crash in the jungle’ and the third about the escape of Mary, Queen of Scots, from a castle.

‘Off Finisterre’, however, is about the spirit of a young bride who died aboard ship as it was in the coastal waters of the title. Each time the vessel passes the same point, a fog seems to descend (not unusual in those parts) and her ghost is seen. Some misfortune always follows. She is seen in the play by ‘an impressionable young poet’. The story, says the reviewer, was ‘gripping and exciting’, and she praises too the production, by Peter Cresswell, which conveyed an ‘atmosphere of eeriness’, with a ‘very skilful handling of background noises, particularly . . . [the] balance of fog-horns and silences’, with the passengers wandering about the fog-bound ship, and their hushed conversations, fading in and out. Also impressive, she says, was the sparing use of the spirit’s voice, and the scene when her husband, returning from the East on the same ship, goes to meet her.

I do not think many radio plays from that period have survived as recordings or even as scripts, so this description of the spectral drama may well be all we have to remember it. Sometimes they might find published form, adapted as plays for amateur theatrical groups, but this does not seem to be the case for ‘Off Finisterre’ or indeed any other play by Giddy. His only publication in The British Library catalogue is a novel, Interval Ashore (1936), about a young naval officer rescuing White Russians from Odessa after the collapse of the Tsarist cause in the Russian Civil War.

Giddy was writing about what he knew because as a young officer, aged 19, he had taken part, as the second-in-command of a motor boat, in a daring raid of August 1919 to sink a Bolshevik battleship and other vessels off the coast of Finland. He was at first presumed killed in action, but had in fact been taken prisoner and was eventually released some months later. Probably therefore he also took part in the Black Sea episode described in his novel, or else knew officers who had.

Osman Cyril Horton Giddy was born on 24 April 1900 to Osman Horton Giddy (1867-1938) and Ruby Margaret Giddy (1876-1921) of Long Ditton, Surrey. His father was a solicitor. He attended Shrewsbury House Preparatory School, Surbiton, until 1912 and went from there to navy colleges until 1916, when he joined HMS Minotaur as a midshipman, and saw action at the Battle of Jutland. He was awarded the Distinguished Service Cross for his part in the 1919 action. He served in the navy in the Second World War too, and died on 7 January 1980, when he was living at The Esplanade, Worthing.

As well as his radio plays, Horton Giddy also wrote a few short stories and his stage play, Contraband, with a Ruritanian theme, was made into a 1934 Elstree Studios film, The Luck of A Sailor. Other radio plays, as well as those mentioned in the review, include a crime mystery, ‘My Life With Ernest Rule’, about a poisoner; and ‘Nobby Clark and the Parrot’ (1939), a nautical comedy. He was evidently a fairly prolific professional writer with a vivid imagination and a versatile pen.

‘Off Finisterre’ was first broadcast on 28 October 1936, with a cast of fifteen, and the programme note reads: ‘The entire action of the play takes place on board a liner crossing the Bay of Biscay, on the return voyage from the East.’ The characters include General Sir George Colley and his wife Lady Colley and son Derek, Dr Cameron, the ship’s doctor, a passenger called Ross (who may be the sensitive young poet mentioned), and various crew and stewards, plus a role simply described as ‘A Voice’, presumably the disembodied tones of the ghost. I‘m not sure how they got the sounds of fog-horns in the studio: they may have had recordings, but I like to think they rounded up a few itinerant tuba players to let loose at appropriate intervals.

There was a different performance of the play on Christmas Day 1948, in the Mystery Playhouse series, an interesting example of the association of ghost stories with the midwinter festival. Grace Wyndham Goldie’s keen description of the play and the production (she was not always so impressed by the radio dramas, and did not hesitate to say so) make it seem distinctly a loss if indeed nothing of the work has survived. 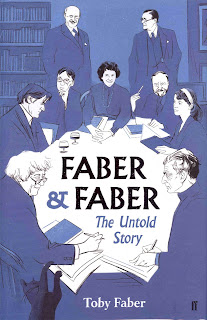 The old saw goes something like this: History is written by the victors.  And if that isn't precisely correct, history, as written, is at least shaped by various prejudices. This is particularly true of literary history, and a newly published example is Faber & Faber: The Untold Story by Toby Fisher.

This book purports to tell the story of Faber & Faber from its founding in 1924 as Faber & Gwyer (it became Faber & Faber in 1929) to 1990.  It is basically an anthology of extracts from the publisher's (private) archive, compiled by Toby Faber, the grandson of the founder, Geoffrey Faber. In one sense it does just that, but it tells a very slanted tale, highlighting Toby Faber's view of Faber as "the home of literary Modernism" (104).  So if you're interested in T. S. Eliot, James Joyce, W.H. Auden, etc., you'll find much of great interest in this book.  If you are interested in the dynamics of literary publishing in the 1920s onward (the coverage of the early years through the Second World War is especially good), ditto. And it's nice to recall the days (now extinct) when an editor had the autonomy to publish almost anything, whereas nowadays everything is overseen by timorous editorial boards which are in turn dominated by the number-crunchers and marketing zealots obsessed only with immediate enlargements of the bottom line.

But if you are interested in the eclectic books that Faber published over the decades you won't find much here to satisfy your appetite.  Fantasy and supernatural literature, and science fiction, are given short-shrift.  If Faber's early fantasy novel Elnovia (1925) hadn't been written by founder Geoffrey Faber himself, I doubt it would even have been mentioned. (I reviewed Elnovia in my "Late Reviews" column in Wormwood no. 15, Autumn, 2010; my review is reprinted in my 2018 collection Late Reviews.)  Despite Richard de la Mare's central involvement with the firm for over four decades, the numerous Faber & Faber publications by his father, Walter de la Mare, are barely mentioned. (There is no mention at all of his brother Colin's single book, They Walk Again (1931), the anthology of weird stories that re-introduced William Hope Hodgson to the reading public.)

From scanning my own shelves for Faber titles I would have loved to read more about in this book, I find most aren't even mentioned at all.  There is a sort of shadow history of Faber & Faber that is completely neglected.  For example, I'd love to know more about the publication of Kenneth Morris's signal collection, The Secret Mountain and Other Tales (1926), beautifully illustrated in an art-deco style by K. Romney Towndrow.  Or of the publication of E.R. Eddison's Mistress of Mistresses (1935), of Donald Macpherson's two intriguing novels (see here), or of the last two novels of Charles Williams.

There is virtually nothing about science fiction in this book, though Faber & Faber had a long history of publishing good science fiction since the 1950s.  None of the many such writers they published are covered: Brian Aldiss, James Blish, Robert Holdstock, Gary Kilworth, or Christopher Priest, not to mention anthologists like Basil Davenport or Edmund Crispin.

So what we are left with in Faber & Faber: The Untold Story is a perfectly readable but heavily slanted and partisan book. Intriguing in some ways, yet disappointing in other ways.
Posted by Douglas A. Anderson at 5:30 PM 1 comment: