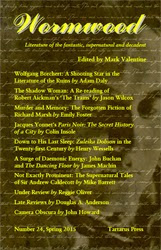 Wormwood 24 is now available for order. We're pleased to present the following:

Adam Daly studies the powerful work of Wolfgang Borchert, a writer in the ruins of post-war Germany.

Emily Foster considers questions of memory and identity in the forgotten work of Richard Marsh.

James Machin proposes John Buchan's supernatural fiction should be better appreciated, and looks especially at his novel of Greek paganism, The Dancing Floor.

A BOOK OF WHIMSIES 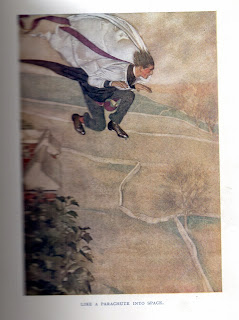 It’s a quarto album bound in white linen, with gilt titles glinting on its spine. The design on the front depicts a creature in a suit, with a long snout: a sort of human aardvark, hanging in the air rather like a question mark. Above him are the words “Don’t Care”. What can it mean? The volume is called A Book of Whimsies, and it is by Geoffrey Whitworth and Keith Henderson, and was published by Dent in 1909. It could claim to be one of the earliest examples of British surrealism, though it has never been credited with that. At the time, both the perpetrators were 22 years old.

There are twelve tales, and each has a picture. Who did what we are not told. Geoffrey Whitworth later issued some poems, not, it must be said, particularly remarkable or unusual, worked for Dent, his publisher, and was also a theatre administrator. He wrote The Art of Nijinsky in 1913, one of the very first studies of the Russian ballet dancer. He translated a book on Flemish towns in 1916, no doubt as a gesture of solidarity with war-torn Flanders, and The Legend of Tyl Ulenspiegel, in an edition in 1918, both from the French. Father Noah, and Other Fancies, his book of poems, came out the same year. His other books are on aspects of the theatre.

Keith Henderson achieved perhaps rather greater renown. He is most known now as the artist who illustrated the wonderful epic fantasies of E.R. Eddison. Henderson published some of his Great War correspondence home, as Letters to Helen: Impressions of an Artist on the Western Front, 1917.

In 1908, just the year before the whimsy book, he had exhibited at the Carfax Gallery some water colour illustrations that he and another artist, Norman Wilkinson, had severally done for Chaucer’s Romaunt of the Rose. A contemporary critic (one “G.R.S.T.” in the New Age) praised them highly, saying “one is in a dream-world spun by imagination which never lets the onlooker down, by a false touch, to solid earth with a sudden jar. These young artists have a certainty of expression, in form and colour and thought, that is quite unusual. If their technical skill is unusually great, still greater is their knowledge of the realms of poesy”.

Replace “poesy” with “whimsy” and much the same may be said of A Book of Whimsies. Henderson went on to illustrate books by W.H. Hudson, including Green Mansions and The Purple Land, Thomas Hardy and Neil Gunn, and in 1924 published Palm Groves and Humming Birds: An Artist’s Fortnight in Brazil. He was an official war artist in the Second World War.

Presumably, therefore, in A Book of Whimsies, Whitworth did the words and Henderson did the pictures. I rather fancy they each had a hand, though, in the inventions, the wild imagination of each piece. The volume has the air of a youthful jeu d-esprit. Connoisseurs of dedications will enjoy its tongue-in-cheek address to various respectable persons: “To the middle-aged of heart we dedicate this book – to all thoroughly dependable persons – to thin persons – to all persons in any way fitted for legal or parliamentary activity – to the Lord Mayor – to the Episcopate – and to all vergers – upon whose souls may God have mercy.”

And the authors say by way of preface that while whimsy is elusive, surely we have all had “moments in our lives when we have felt neither noble nor useful nor anything but just simply, may we say it, ODD – when the most dining-room chair, the most hopelessly penny bun, may have appeared quite improbable?” Though the tone is facetious, their credo is quite clear and consistent and is not remote, in its way, from that of Arthur Machen, seeing romance and the inexplicable in the world before us, in the purlieus of Stoke Newington, for example, or the high road of Holborn. These younger authors assert that what we call whimsy “depends on a recognition of the ultimate oddness of all phenomena”. And, to those who ask about the meaning of their book, they retort, “what, pray, is the meaning of You?” We must admit it is not an unreasonable question.

The stories perhaps draw on the English tradition of whimsy most known through the work of Lewis Carroll or Edward Lear: but they are also quite different to those: more modern, perhaps a little harder in the eye, certainly quite remorseless in following their own odd logic. The word “whimsy” has drawn to itself connotations of the fey but originally it was more robust than that, and could be used to describe most peculiar and original ideas. This book is in that stranger, more startling and rather unnerving tradition.

The tales are often, in their exuberance, about breaking free of convention, or a quest for meaning, even if the meaning itself remains elusive and obscure. In ‘Frenzy’, a parson preaches upon the colour purple, throws off a false beard, pounds out a Bach fugue on the organ and then scampers up the spiral staircase of the church and throws himself off the tower: his vestments act as a parachute (but for how long?). In ‘Palsy’, a little miniature satire of the fad for books about future wars, we learn, “England was doomed”: its last ship sunk, invasion fleets are on their way. There is one man only, Mr McCabe, who can save the country, as he sits watching the coast. He need only send a certain telegram – “a message to Portugal’s Foreign Minister”. But he was quite enjoying the hush fallen over the land; the next moment would do just as well; his mind ventures “at a tangent into eternity”. The smoke of the invading ships hazes the horizon.

‘The Golden Monocle’ begins: “The dark-eyed youth wore a monocle”. The eyegelass is further evoked: it is golden, hypnotic, sometimes clear as water, or “as a moon gleaming”. Two young women golfers conceive an attraction – no, more, a lust – for the dark young man – or is it really for his monocle? The “terrible disc” haunts one of them, and she decides she must have it, and will stop at nothing to get it. With admirable succinctness, the course of her obsession is delineated and consummated. There is a touch of the tales of Saki about the brittle insouciance of the piece.

Equally sardonic is “Clarification”, in which Miss a Becket wakes with the certainty of a message from God – “a solution to the riddle of the universe”. It is that there is only “one prime element”: Light. And Darkness is a mistake. So illuminated, she lights two candles. But it is not enough. There are still dark corners. She forages for every form of light she can find in the house: lamps, candles, a bicycle lamp. And then she finds the fireworks. Soon she is dancing on the wet lawn of the morning in an ecstasy of flame and light.

In another episode, the character of Montagu is at first more calmly possessed. We are told he is recently freed from a lunatic asylum, and wishes to acquaint himself with the nature of sanity. So, naturally – to him – he enquires of the booking clerk at the railway station where he might find “the sanest men in the kingdom”. The clerk gives him a second class return to Melton Mowbray – a small town in Leicestershire chiefly known for pork pies. Montagu finds in his freedom all aspects of the station thrilling – the steam engine, even the little green ticket, token of his release. At his destination, a policeman kindly takes him to seven old men with long white beards sitting in a courtyard under a sycamore tree: “The Seven Sane Men of Melton Mowbray” of the story’s title. But Montagu does not get an answer about sanity, only a weak mumbling. The story has something of the fateful, fantastic mood of a Lord Dunsany tale.

The piece entitled “Nodules” gathers much peculiarity into a few pages. The narrator and Mr Bailly have come “in search of greyish-mauve objects”. They might be botanists or mycologists. The terrain is dry and cracked, the heat smelting. Mr Bailly shows signs of restlessness, yet the quest cannot be ended so soon. The narrator consults his compass, set always “N.E. by W.” and calculates their next course: “And so, at owl-time, we departed from that place”. The absurd and the futile mingle freely here, and yet there is also a sense of some unsaid mystery.

In ‘Nice Feeling On the Part of Two Young Men’, a slightly Wodehousian sketch, the youths in question have mistaken each other’s intentions regarding “the lady in yellow alpaca at no. 5”, each supposing the other of wanting to be her amour: once this is cleared up, they speak rather flippantly of their devotion to each other. The theme returns in the more bizarre ‘Portmanteau’, in which two nude young men live together in a large trunk, solely for the pleasure of the moment when they can get out and stretch their limbs. There is a picture of them doing just that, lithe, slender and flame-haired. One is bound to wonder a little if these vignettes were a coded statement of the affection felt by the authors for each other, two in a shared world who long to be able to reach out further.

The colour plates are beautifully done, with all the gloss and finish of the society portrait, yet depicting such strange scenes. The parson in ‘Frenzy’ is shown in giddy, world-tilting leap above dun fields, his white vestments in full billow, his orphrey a banner of purple. The ‘Nice Young Men’ are studies in pink and fawn in a white room, in slippers and smoking jacket. In the picture for ‘Palsy’, the grey clouds from the invading ships are mere pencil smudges: the burden of the scene is the back of Mr McCabe’s head, stiff and slightly bowed as he sits in his wooden chair watching through the window. Among the pink jackets and gowns of the Hunt Ball, the eye of the dark young man with the golden monocle in the story of that name stares out at us, rather fiercely, and haughty young women are shown trying hard not to look at it, turning away defiantly or dreamily. In the dreary brown landscape of ‘Nodules’, the gleam of Mr Bailly’s top hat, and the thrust of his impatient unfastened umbrella capture the tension of the fruitless quest.

It does not matter how often I turn the pages of this curious volume, I always find some new diversion, in the turn of the prose or the fine detail of the illustrations. Yes, I sometimes think that if I stare long enough at one of these pictures of deeply strange dreams, I might be drawn into some world beyond, where all is changed, and our own selves become strange genii, capable of many shapes, fleeting and aetherial.