AND I'D BE THE KING OF CHINA 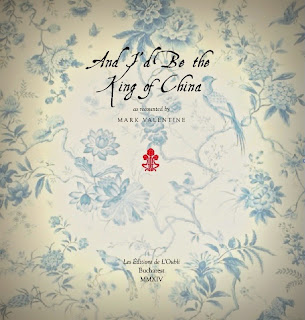 The astonishing story of the Eighteen Nineties writer who tried to make himself King of China – as a prelude to seizing the throne of the United Kingdom.

“There was such genius in his letters,” a contemporary wrote, “such brooding energy, such hate of life, such an uncanny suggestion of terrific power, that I treasured every word he wrote to me.” He was “fascinating, mysterious and demonic…the most romantic of all men I have met in the spirit”. To this commentator, he was a figure more striking even than D.H. Lawrence, Aleister Crowley, George Bernard Shaw, Frank Harris or Augustus John.

Mark Valentine’s essay tells the story of Charles Welsh Mason, who was thrown out of China for trying to lead an armed revolt, and returned to England to take up decadent literature, writing under three different names. His first book, collecting stories of his Chinese experiences, was compared to Kipling and Conan Doyle. His semi-autobiographical Max, published in 1897 by the modish Nineties imprint of John Lane, caused critics to invoke De Quincey for its descriptions of opium addiction.

The mysteries of Charles Welsh Mason do not end there. He took part in the Yukon gold rush, may have returned to China for the Boxer Rebellion, loved a youthful cup-bearer he called Gazelle Eyes, wrote a now lost book on Chinese torture, was last known as a roadman in the USA, and then vanished – but not before leaving a book of confessions.

This first literary study of an extraordinary character pieces together what is known from his memoirs and his books. A flavour of his work is also offered in a vignette, “A Little Chinese Party”, and there is a checklist of his publications.

Update: the book is now out of print but copies may be available from Mark Ziesing in the USA.

It's sometimes said that the popularity of cheap penny literature in Victorian England was very much a London phenomenon, however is clear that Penny Bloods were popular much further afield.  For example, Edward Lloyd's Penny Bloods were advertised in the Hull Packet and East Riding Times in the 1840s.

This advertisement appeared in January 1847 and mentions James Malcolm Rymer's Ada the Betrayed and Varney the Vampire; or The Feast of Blood ("By the author of Ada the Betrayed"): 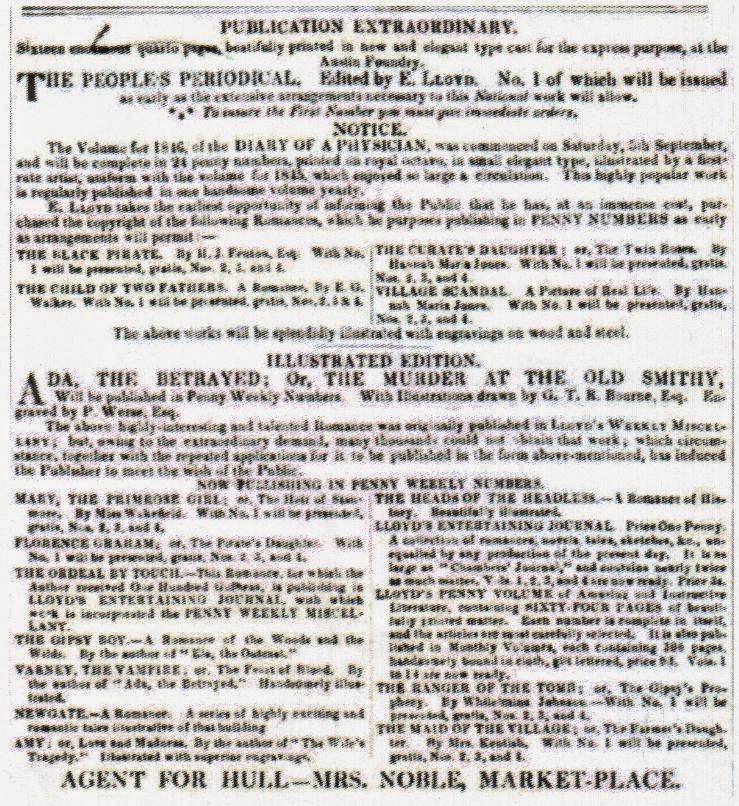 The following advertisement appared in the 21 April, 1848 issue.  It is interesting for showing the close connection at this time between Edward Loyd and George Purkess.  Although titled "Lloyd's Works" (with Lloyd's London address at the end), according to Marie Leger-St-Clair's excellent Penny Bloods database many of the titles listed in the advertsement were actually published by Purkess or by Purkess & Strange.  The Ringdove, The Pledge, Ethelinde, The Miser's Fate and The Doom of the Drinker were published by George Purkess; The Rosebud, The Corsair, A Lady in Search of a Husband, The Double Courtship, The Unhappy Bride, and The Golden Marriage were published by Purkess and Strange.  The Mysteries of the Quaker City and The Virgin Bride were published by Lloyd & Purkess, while ten of the titles were published by Edward Lloyd.  The publisher of Lucille; or The Young Indian appears to be unknown. 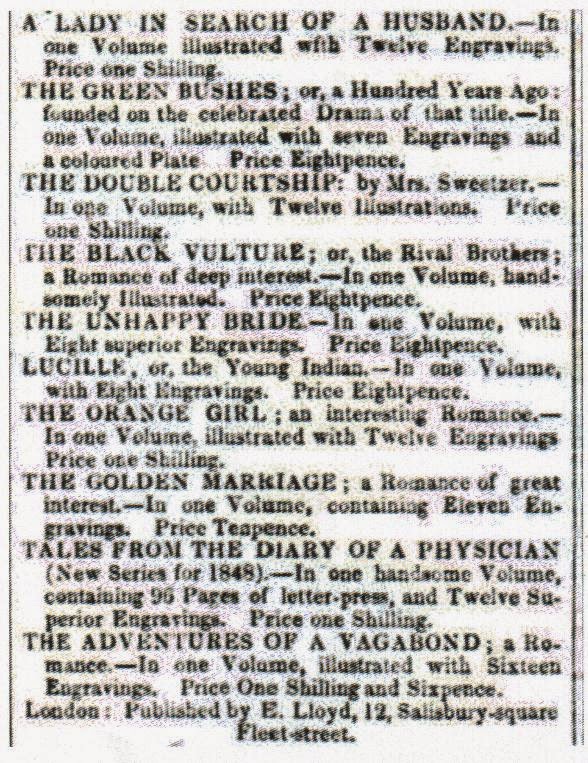 Posted by James Doig at 3:43 AM No comments:

Nugent Barker (1888-1955) is best remembered for his collection of twenty-one short stories, Written with My Left Hand (1951). This rare volume was reprinted by Tartarus Press in 2002, and for the introduction in the new edition I gathered together and wrote up what I had found on the elusive author. In 2014, Tartarus published a new edition of the book, and I was glad to be able to update my introduction with some new facts gathered in the intervening years.

In 2002 I wished that we had  "some examples of Barker's black and white artwork"---at that time none were known. By 2014 I had found one article illustrated with three drawings by Barker. The article is "My Experiences in the 'Black Republic'" by Frank Rose. It appeared in the June 1919 issue of The Wide World Magazine. The article is on the West Indian republic of Haiti. Tartarus chose not to include any of the three drawings in the new reprint, so I post all three here so as to share with the fans of Nugent Barker's excellent fiction. 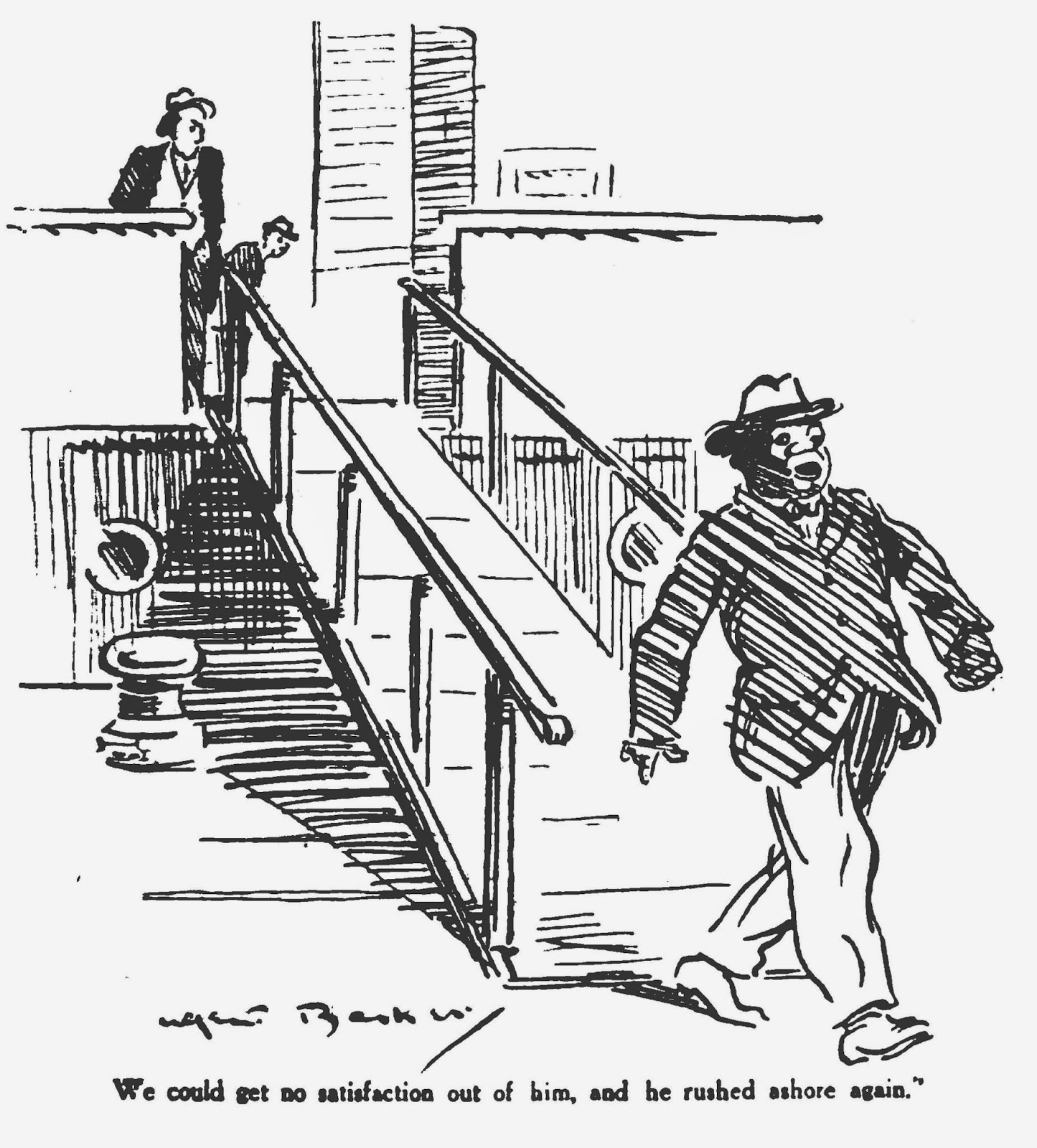 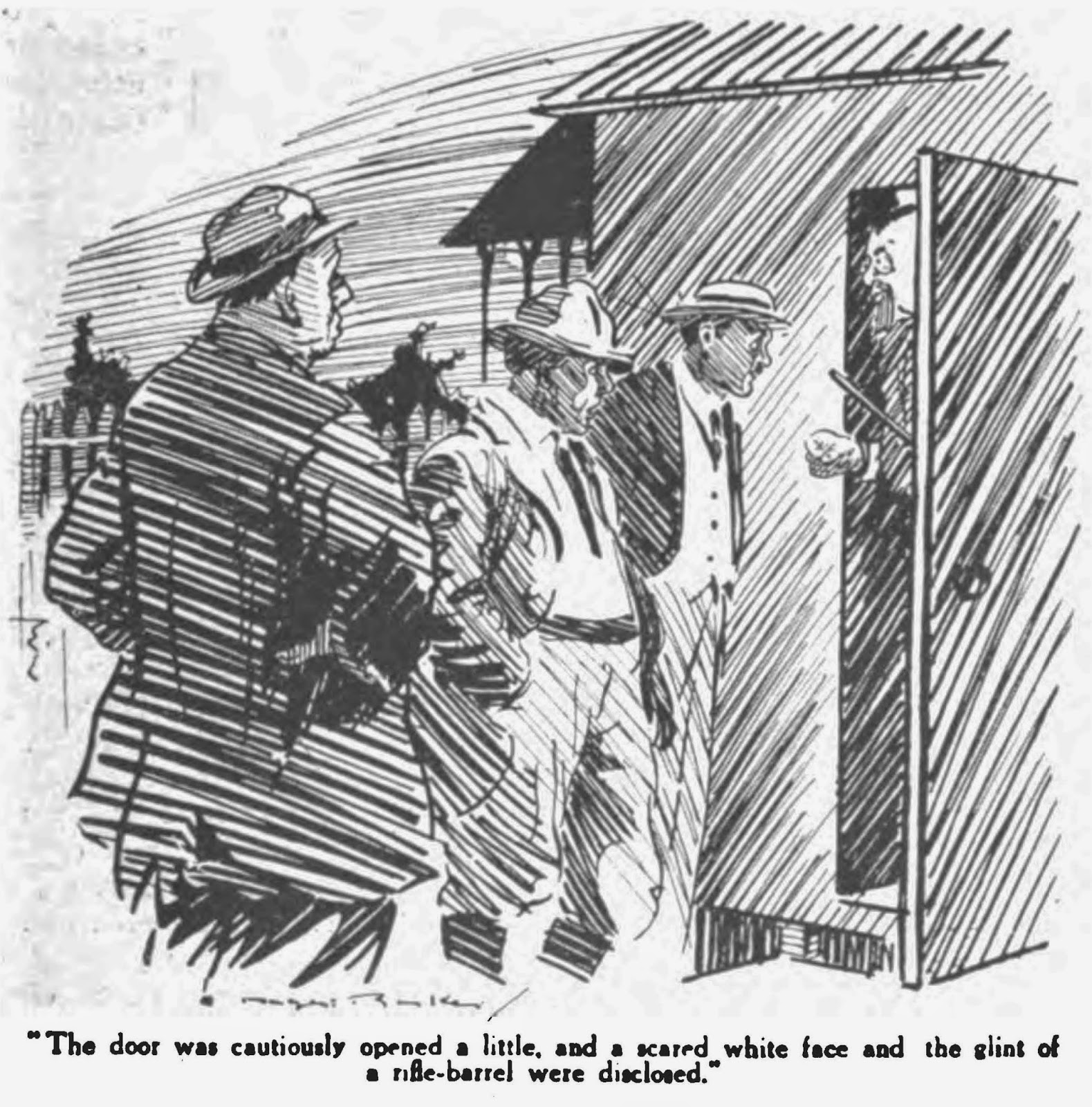 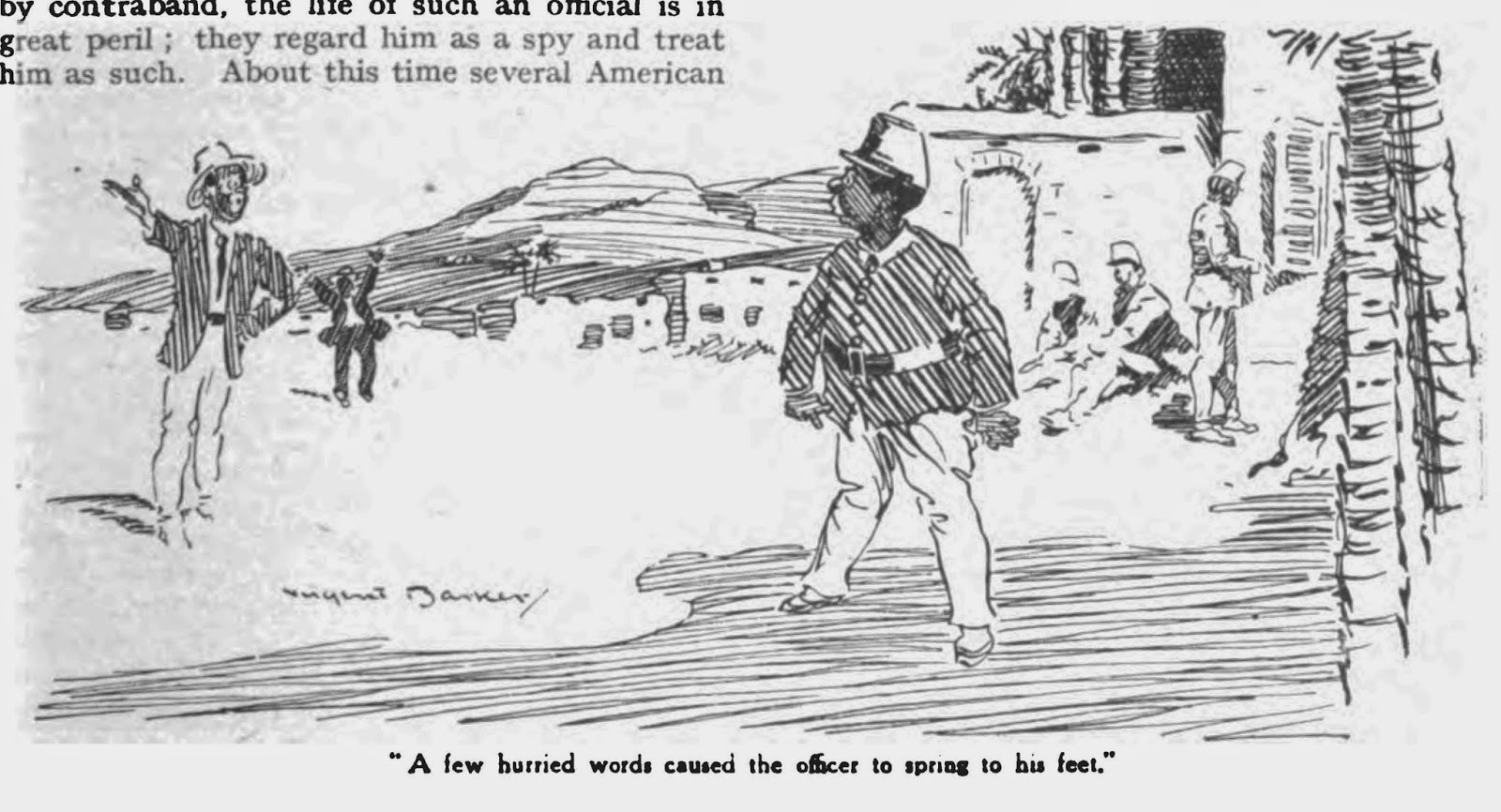 Posted by Douglas A. Anderson at 2:43 AM No comments: