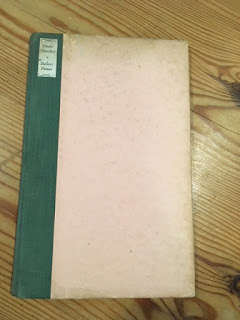 Herbert Palmer is a largely forgotten poet of the mid 20th century. But his early books were published by Leonard and Virginia Woolf at their Hogarth Press, his work was admired by Robert Graves, and his prophetic verse, concerned with the mythic forces of good and evil, was compared to that of William Blake. His publisher described Palmer as “the symbolist and apocalyptic bardic poet.”

Palmer was born in the little Lincolnshire town of Market Rasen on 10 February 1880. He went to university in Birmingham and Bonn, and made his living in his twenties and thirties by teaching, tutoring and lecturing, especially for the Workers' Educational Association. In 1921 he took up journalism and other writing full time: besides his poetry, he edited anthologies, published a book on teaching English, and undertook some translations.

He did not begin issuing books of poetry until he was in his forties, though there had been youthful ephemera in journals and newspapers. In 1931 he published a pungent parody of Eliot, Cinder Thursday, which has a fertility of allusion and restless energy which might have been better deployed. He befriended and encouraged the young poet, editor and bookman John Gawsworth, who included a bibliography of his work in his Ten Contemporaries (1932): through him he also met Arthur Machen. The copy illustrated here has a presentation inscription from Fytton Armstrong (ie John Gawsworth) to A E Coppard, noted “for an autograph.” 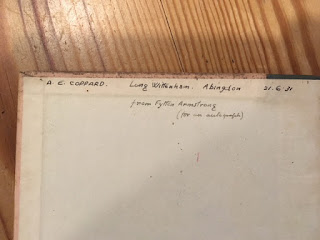 A Collected Poems was published in 1933 and a late blooming, The Ride from Hell, came out in 1958. Herbert Palmer died on 17 May 1961. His literary executor, Alan Denson, compiled Herbert Edward Palmer (1880-1961): a bio-bibliographical survey and calendar of recordings, with a foreword by Phoebe Hesketh (Oliver Alden, 1994).

Herbert Palmer’s verses are archaic, arcane and declamatory. Several have macabre themes, such as The Vampire (1936). His chief weaknesses to the modern reader are a fondness for antiquated wordage and a reliance on easy, obvious rhymes. But sometimes the fervour and fierce feeling in his poems transcends these traits and we get a real sense of a powerful imagination haunted, even harried, by the forms of gods and demons.

Edward Thompson, reviewing the Collected Poems for The Spectator (10 March, 1933) said: “the fire and swing of his best verses are unsurpassed. What I think his greatest poem, Song of Job and Solomon, is tremulous with ecstasy of both suffering and surrender… He is the most individual of living poets, and one of the noblest.”

A Checklist of Books by Herbert Edward Palmer

The Look Away - Richard Skelton 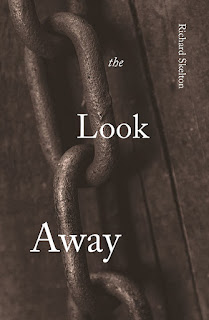 ‘As if Samuel Beckett had written The Goshawk’
(Mark Valentine)

The Look Away by Richard Skelton (Xylem Books) is an austere and powerful novella about a fugitive in remote country in a world of dark truths and bleak, whittled beauty. It is a study of isolation and the stark facts of survival, yet it is also attentive to the brittle transience shared by all living things, and how this gives every moment an intense significance. The writing is compelling and insistent and makes a deep impress upon the reader.

This is Richard Skelton’s first long fiction and possesses all the haunting, mesmeric qualities of his music, poetry, film work and essays. The original limited edition sold out it in days but now The Look Away is available again in paperback.

‘A narrative of menace and wonder’
(Julian Hyde) 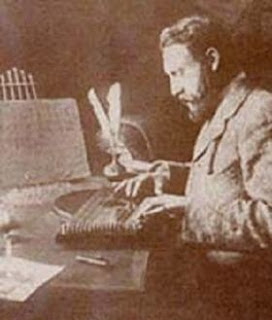 In his pithy 1917 introduction to A Dreamer’s Tales And Other Stories by Lord Dunsany, Padraic Colum tells of how the author’s sense of the fabulous could send him dreaming simply over the sound of certain words: “He would not judge a book by its cover but he would, I am sure, judge it by its title. I have seen him become enraptured by titles of two books that were being reviewed at the time. One was “The High Deeds of Finn,” and the other “The History of the East Roman Empire from the Accession of Irene to the Fall of Basil the Third”. Colum adds, with a glancing wit, (“I am not sure I have got the Byzantine sovereigns in right).”

These are indeed titles to beguile the connoisseur of rare and strange works. The first must have been The High Deeds of Finn, and other Bardic Romances of Ancient Ireland by T.W. Rolleston, with an introduction by Stopford A. Brooke, and with sixteen illustrations by Stephen Reid (London: Harrap & Co, 1910). This was one of several books of heroic romance that Rolleston wrote for Harrap: there was also Myths and Legends of the Celtic Race (1911), Parsifal; or, the Legend of the Holy Grail, Retold from ancient sources with acknowledgement to the “Parsifal” of Richard Wagner (1912), and The Tale of Lohengrin, Knight of the Swan, after the drama of Richard Wagner (1913), these last two with artwork by Willy Pogany. It is no surprise that Dunsany would have been drawn to the ancient Irish tales, but what of the other book Colum names?

The book in question must without a doubt have been A History of the Eastern Roman Empire, from the Fall of Irene to the Accession of Basil I. A.D. 802-867 (London: Macmillan & Co., 1912) by John Bagnell Bury (1861-1927). It will be seen that Colum had indeed not got his Byzantine sovereigns “in right”, since the fall was that of Irene and the accession that of Basil, and not the other way about as he has it, and the Emperor Basil was the first and not the third of that name. But I wouldn’t put it past Colum to have juggled his potentates on purpose for greater euphony or peculiarity.

Further investigation of this historian’s catalogue reveals other titles of interest. Dunsany would perhaps also have known his edition of the early Irish chronicle of The Itinerary of Patrick in Connaught, according to Tírechán (1903). On the other hand, The Invasion of Europe by the Barbarians (London: Macmillan & co, 1928) sounds just like an episode passingly told in one of Dunsany’s histories of fallen kingdoms and vanquished cities, when the gods happened to be looking the other way.

The same historian’s The Imperial Administrative System in the Ninth Century, With a revised text of the Kletorologion of Philotheos (London: Oxford University Press, 1911) may not at first glance sound quite so thrilling as the rise and fall of empires and emperors. Yet it certainly may lead us to wonder what exactly was or is a kletorologion and why we have not encountered one before.

It transpires that it is a document giving the order of precedence of all the office-holders in the Byzantine Empire, whether bearded men or eunuchs (such was the distinction made). It was compiled to assist in ensuring they were all seated with the dignity proper to them at the imperial table. It also offers advice on the procession of the banqueting year and other useful information related thereto. This sounds quite Dunsanyesque too, and it would be possible to imagine a tale in which some slight mis-ordering of the imperial guests results in strife and discord and the tumbling of dynasties.

This book is replete with recondite and rather rococo detail. In contemplating the elaborate Byzantine hierarchies, Mr Bury provides some diverting footnotes. For example, we learn: “The Protovestiarius descended from the old comes sacrae vestis of the fifth century. He presided over the private wardrobe (sacra vestis) of the Emperor, to be distinguished from the public wardrobe which was under the Chartularius.” Who could doubt it?

Also, “The Deuteros was the assistant of the Papias, and took his place when he was ill, but was independent of him, and had subordinates of his own. His special province was the care of the Emperor's chairs and thrones (and probably the furniture) in the Chrysotriklinos, as well as the curtains in those apartments, and all the Imperial apparel and ornaments which were kept there.”

We may look in vain, however, for such surely essential appointments as the acolyte of the imperial cats, and the Lord High Librarian. But, now, what was the Chrysotriklinos? Why, it was the great domed throne room of the Emperor, in which the golden throne was guarded by two golden lions and crested by a golden banana tree with bejewelled birds perched among its leaves. Even the many refulgent palaces of Dunsany’s tales could not perhaps quite compete with that.

Curiously enough, Dunsany's own book titles are rarely of the same resonance as those he apparently admired. The Gods of Pegana is perhaps not so far off the mark, but Fifty-One Tales might be regarded as somewhat plain, while even The Book of Wonder and A Dreamer's Tales itself are not exactly richly ornate. Instead, Dunsany reserved his echoing prose for his story titles, and certainly there are those, such as "The Fortress Unvanquishable Save For Sacnoth" and "The Fall of Babbulkund" which might indeed compete with the high deeds of Finn and the accession of Basil I.

Picture: T W Rolleston (with thanks to The Offaly Historical & Archaeological Society).