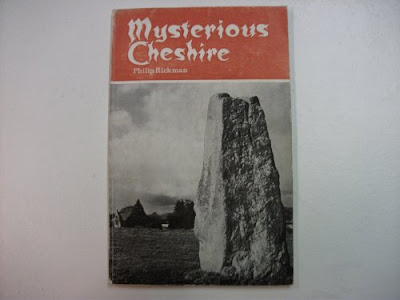 ‘For beyond history lie the sub-strata of legend and folklore, custom and tradition: stories and patterns of behaviour for which we cannot adequately account . . . What might now be seen as romantic or purely aesthetic reactions to the moods of nature may conceal a highly practical mechanism in which man and the elements are compatible cogs. The turning of the seasons, the cycle of the country calendar, the sacred paths marked out both physically and metaphysically on a knowing landscape.’  (Philip Rickman, Mysterious Cheshire, 1980, p.7)

Among the further titles that John Billingsley, editor of Northern Earth, suggested to me in response to my post on Ancient Mysteries Books, were two local folklore booklets, Mysterious Derbyshire and Mysterious Lancashire by Philip Rickman and Graham Nown: Philip Rickman also did a Mysterious Cheshire.

Short guides to local history, folklore and landscape are often produced, sometimes by the local newspaper or publisher, and would be an interesting area of study in themselves, but these examples are notable for two reasons.

Firstly, they don’t only evoke, like most such monographs, myths and legends researched in old antiquarian journals and county histories: there is much more about contemporary interests such as dowsing, ley-hunting, modern pagan witchcraft and Celtic studies. That would have been an unusual, not to say radical, approach in this field then, when such interests were often regarded with suspicion. The booklets are thus a time-capsule of the Sixties/Seventies “ancient mysteries” approach and atmosphere, and the quotation above perfectly captures the ideas around then. That phrase ‘a knowing landscape’ is particularly insightful.

The bibliography at the back of Mysterious Cheshire contains, not only the sort of county guides to be expected, but many of the titles we noticed in the Checklist in the previous post: those by the Bords, Dames, Graves, Hitching, Michell, Phillips, Roberts, Screeton and Underwood. It also mentions a landmark work I ought to have remembered: Pagan Celtic Britain by Anne Ross (1967). Also listed are Fifties books by the archaeologist and visionary T C  Lethbridge which are just outside the period I focused on, but were certainly influential.

Secondly the ‘Philip Rickman’ who wrote or co-wrote these booklets went on to write, as Phil Rickman, many highly-regarded supernatural fiction novels, including the Merrily Watkins series about a Church of England exorcist and psychic sleuth in the Welsh Border country around Hay-on-Wye. These books also draw deeply on folklore and mythology. And I think you can tell (not just with hindsight) that the young folklorist who wrote these local guides was getting ready to write fine imaginative fiction, because the prose style is so much more rich and evocative than is usual in such often fairly functional publications.

There are also two further connections to supernatural fiction. Mysterious Cheshire naturally discusses Alderley Edge: ‘where plain meets Pennine on a 600-foot cliff face, bearded with bracken and stubbly trees,’ and this of course leads to Alan Garner, the Mage of the Edge, author of the much-admired young adult pagan fantasies set there.

The other link is more oblique. There is a short one paragraph Appendix 1 in the Cheshire booklet entitled ‘Small, Dark and Dangerous’. This mentions ‘a paper published by the Lancashire and Cheshire Historical Society in the 1880s’ about people in the Bridestones country that were “neither Saxon nor Briton, but a throwback to a much earlier race. People had a saying: ‘There are Englishmen, Frenchmen and Biddlemoor men.’”  Needless to say they have a sinister reputation. And it was just after this time that Arthur Machen, in his occult fiction, was to write similarly about a precursor race of Little People, living in remote country and equally dark of repute.

The publisher of these guides, Dalesman, are more often associated with a gentle country life journal, The Dalesman, then mostly about sheepdogs, drystone walls and rural crafts, and it is somewhat surprising to find them issuing anything so alternative. I can only think that either they wanted to try out a more youthful vibe or that Phil Rickman was a highly persuasive young writer. I have checked to see if they issued anything else like it at the time, but not as far as I can see.

However, these fascinating guides certainly illustrate the nexus between ancient mysteries books and the resurgence of interest in fantasy and supernatural fiction that began in the Sixties and Seventies. 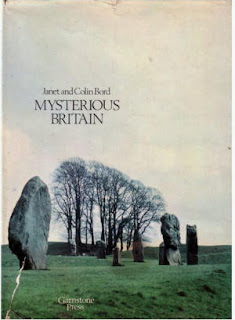 As part of the Age of Aquarius and the counter-culture of the Nineteen Sixties and Seventies, there was a new surge of interest in what might be loosely called ‘ancient mysteries’. This included a creative and intuitive approach to antiquarianism, looking at prehistoric monuments from a fresh perspective, often disdained by orthodox archaeology.

In particular, there was a keen interest in finding shapes in the landscape – astronomical alignments, ancient trackways (‘leys’), giant figures, zodiacal and other symbols. Alongside this burgeoning interest there was a rise in new age and neo-pagan affinities and a yearning to know more about the beliefs and deities of our earliest ancestors.

Most of all, though, there was for some simply a pleasure in exploring relatively unknown and lonely country looking for obscure ancient monuments – fallen standing stones, hidden holy wells, lost turf mazes, remote hill forts, minor stone circles, ruined churches. It offered a different world to that of the sometimes all-too-real everyday.

These interests were soon reflected and encouraged by books issued both from specialist alternative small presses and, when they saw the way the wind was blowing, by major paperback houses. These titles are an interesting parallel to the explosion of interest in fantasy fiction in this period (most notably in the Pan Ballantine Adult Fantasy series) and in books of ghost and horror stories eg from Fontana, Pan, Corgi and Granada.They seem to share a similar ambience.

Indeed, these books can be seen to have their ground (whatever their specific themes) in the idea of haunted landscape, what Arthur Machen called ‘occult territory’; the possibility that particular parts of the country have a strange and numinous, or even brooding and sinister, quality.

John Michell’s The View Over Atlantis is often cited as the keystone book here and, because of its range, was certainly received with enthusiasm, but other books listed below were also important in fostering this interest. And probably for a wider audience it was Mysterious Britain, written by Janet Bord with photographs by her husband Colin, that really got readers interested in the ancient landscape of these isles.

There is an interesting interview with Janet Bord at Art Cornwall, where she discusses the background to the book, and confirms that it grew out of involvement with the alternative scene in the Sixties, notably the magazine Gandalf’s Garden.

By no means all that was going on was to be found in books: for the devotee, as noted in a previous post, there was a wonderful range of journals and newsletters that are also part of this picture, and there were also weekend conferences and ‘moots’, often with field trips, which enabled like-minded souls to get together. Other distinct but related dimensions of the period include UFOs/Flying Saucers; Forteana; Occultism; the Western Mystery Tradition; Goddess Spirituality; and, from the early Eighties, Psychic Questing.

Here is a checklist of what I think of as the leading, most influential books in this field in the relevant period, from the mid-Sixties to the early Eighties. I started by listing those I could remember (and often still have in my possession) from my own interest, and then branching out a bit. Without doubt, I have missed some, and other titles would have been more important to other readers and researchers (I welcome suggestions), but at least this is a start.

A Selected Checklist of Ancient Mysteries Books in Britain

Camelot and The Vision of Albion – Geoffrey Ashe (1975)

The Stone Circles of the British Isles – Aubrey Burl (1976)