Arthur Machen once wrote a short note about the title of his macabre romance The Three Impostors (1895), volume XIX of the Keynotes series. De Tribus Impostoribus, he says, “was a book much talked of by the learned in the seventeenth century. As far as I can remember, Browne of the “Religio Medici” speaks of that “villain and secretary of hell that wrote the miscreant piece of ‘The Three Impostors’”. But it is doubtful whether such a book were ever in existence – in print at any rate. Afterwards such a book was forged….Perhaps there never was such a book, perhaps such a book did exist in manuscript, was seen by a few and talked about by many. Anyhow, I liked the sound of the title, and noted it in ’85, and indicated in my notebook the sort of book – a picaresque romance – I should like to write under that head; and so had the title waiting for me in the spring of 1895.” 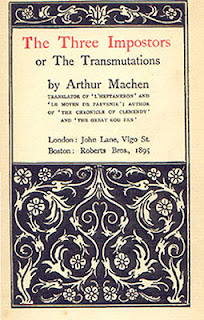 French historian Georges Minois published in 2009 Le Traité des trois imposteurs, a study of the original mythical medieval work on the Three Impostors, attributed to Frederick II, the Holy Roman Emperor. It has now been translated with the somewhat catchpenny title The Atheist’s Bible- The Most Dangerous Book That Never Existed (University of Chicago Press, October 2012). The study looks at attempts through the ages to find the book – or to create it – tracking it through movements and imprints in Geneva, Leiden, Prague, London and other possible sources. Though there is no direct Machen link, the story is fascinating itself and we can be sure it would have appealed to him.