Catching Up with Le Visage Vert

Here's the new issue, which contains (among other things) two stories by Stefan Grabinski, and two studies of Grabinski, by Pierre van Cutsem (biographical and bibliographical, with nice color illustrations) and by Michel Meurger.  For the full contents see here. And for ordering information, see here. 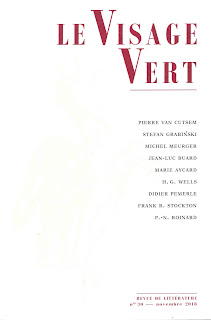 Issue 29 came out about a year ago, and it has two pieces by Marcel Schwob, and two articles about him, along with the fourth installment of Michel Meurger's historical study  of werewolves (the third installment appeared in issue no. 27), among other intriguing items. For the full contents see here. And for ordering information, see here. 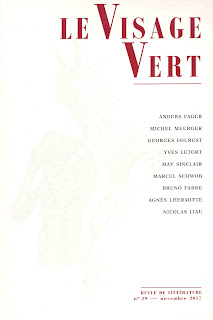 Recent publications in the Librairie du Visage Vert include the first of three planned volumes of stories by Maurice Level, Les Oiseaux de nuit [Night Birds], with a long Preface by Philippe Gontier and a long afterword and extensive bibliography by Jean Luc Buard. Such extensive coverage of Level is long overdue and very welcome. For ordering information, see here. 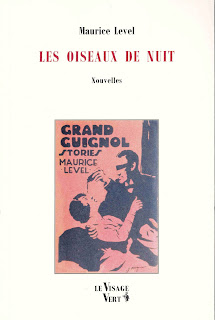 And there is a recent collection of essays on Lovecraft, edited by Christophe Gelly and Gilles Menegaldo, Lovecraft au prisme de l'image: Littérature, cinéma et arts graphiques [Lovecraft in the prism of the image: literature, cinema, and graphic arts]. For ordering information, see here. 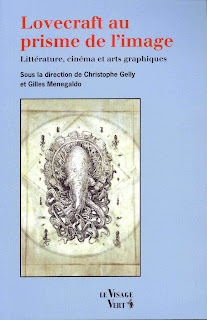 As usual, these LVV publications are elegantly and tastefully produced.  Have a look around at their main page here, and scroll down a bit to find their list of publications, with the most recent nearer to the top.
Posted by Douglas A. Anderson at 1:46 AM 1 comment:

A Forgotten Precursor of 'Watership Down' 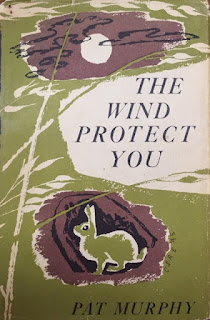 In the mid 1960s, Richard Adams made up a story about rabbits for his daughters Rosamond and Juliet aged six and eight to while away a long car journey to the theatre from London to Stratford-upon-Avon (as recalled in “'True meaning' of Watership Down revealed ahead of TV revival”, Mark Brown, Arts Correspondent, The Guardian, 10 December 2018). They then persuaded him to write a book on the same lines, which became the bestselling, much-loved animal fantasy Watership Down (1972).

It recounts how a group of rabbits go on an epic journey across dangerous country to find a new home after their burrows are destroyed. A new animated version is to be broadcast by the BBC on 22-23 December 2018. But was there an earlier source for the story which up until now has remained unknown?

In 1946 a novel called The Wind Protect You (Collins) by Pat Murphy was published. In that year, Adams was demobbed from his wartime posting in the Army, had returned to England and had resumed his history studies at Oxford. ‘Pat Murphy’ seems to have been the pen-name of Edmund Patrick Joseph MacMorough Murphy, about whom very little information is to hand. He was born in 1897, according to one source, and, to judge by an inscribed copy of his book, lived at one point in St Mawes, Cornwall. This was his only book, at least under that name. And it is a remarkable precursor of Adams’ novel, with several distinct similarities.

“Rabbits are the characters in this story—rabbits as the centre of their own universe,” explains the dustwrapper. The treatment of the rabbits has the same unusual approach later adopted by Adams. They are not semi-humanised, as in Beatrix Potter’s Peter Rabbit stories or Kenneth Grahame’s The Wind in the Willows, but neither are they described as if by a human observer, as in Henry Williamson’s Tarka the Otter, a sort of fictionalised natural history book. The rabbits in Murphy’s book have the instincts and behaviours of real rabbits in the wild, clearly based on keen observation of, or reading about, how the creatures actually live, but they also have speech and imaginative thought. Watership Down has the same distinctive perspective.

There are other parallels. The earlier novel is a story of rabbits making a long, risky journey, seeking refuge: “the survivors set out again on their eternal cycle of pilgrimage”, we are told. This is the plot line also followed by Watership Down. In Adams’ book, there is an enthusiastic young rabbit, Hazel, tempered by an experienced old veteran, Bigwig: in Murphy’s there is a similar pairing of Lynx, a domesticated rabbit who escapes from his hutch, and Albert, who is “very old and very wise”.

Murphy’s book depicts hostilities between two rival sets of rabbits, as does Adams: and there are allusions to a terrible disease which wipes whole settlements out, as in Watership Down too. Another striking, and very specific, similarity is that in Murphy’s book the rabbits are assisted by deer, just as the doe Hyzthenlay helps the rabbits in Adams’ book. [Edit: but see the comments, where David Bratman notes that she is a doe rabbit, not a deer, so this parallel is not correct.]

And the final scene in Murphy’s book is a mystical vision of the dawn sun, while in Adams the rabbits worship the sun-god Frith.

It is of course perfectly possible that Adams knew nothing whatever of Murphy’s book and simply happened to alight on the same elements independently. Perhaps, it might be thought, there are only so many plot lines available when writing of the rabbit world. And it must be said that Adams' is in many ways the better book—more complex, more poetic, and with an original element in the hints of the rabbits' own language and more developed mythology.

But given the numerous similarities, it is reasonable at least to wonder whether Adams might have read it and drawn it vaguely to mind on that tiresome car journey twenty years later, perhaps even without being fully aware he was doing so. He may have forgotten the original source of his inspiration and was not conscious of this apparent debt when he then went on to create his own much richer and deeper version.

In any case, Pat Murphy’s The Wind Protect You, which has so far passed into almost-complete oblivion, surely ought to be better-known. At the very least it has some of the interesting ideas and appealing qualities which were to prove so perennially popular in the later book.

The Green Book 12 - Irish Writers of the Fantastic

Just out from The Swan River Press, Dublin, is The Green Book Issue 12 which is devoted to essays on Irish writers of the fantastic and supernatural, the first in several planned volumes on this theme. This covers not only the well-known leading luminaries in the field, but also neglected, obscure and overlooked figures.

Each piece provides a summary biography, a discussion of the author's work and notes on further reading. This is sure to be a fascinating survey and a useful guide to readers who would like to explore further in Ireland's rich literature of the strange and wondrous.