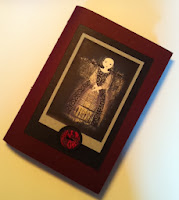 Maria Luise Weissmann (1899-1929) translated the work of Paul Verlaine and Blaise Cendrars, and also wrote a handful of books of her own poetry, and one novel. Her work is little-known even in her native Germany and has not been widely translated.

Mark Valentine has written the first known translation of her brief but strange and sensuous poem, “Do Marionettes Die?”, which in just twelve lines evokes the precious life of dolls and puppets and our curious affinity with them. Jo Valentine has created striking images that complement the uncanny world of the poem. Both the original German and new English texts are provided in a hand-made “double book” in soft covers, together with a brief note on the poet and several haunting portraits of her. Each cover has a unique variation on the design, though all feature dolls and puppets.

This is the third publication from the Valentine & Valentine imprint, and is in a limited, numbered edition of 25 copies only. Note: the translation appeared earlier in Mark Valentine’s Star Kites, Poems & Versions (Tartarus Press, 2013).

Update: all copies have been taken. We hope to announce another title in about a month.

The Return of Kala Persad

The Divinations of Kala Persad (1895) by Headon Hill introduced possibly the first Hindu detective in Victorian fiction. The title character, however, is kept out of sight in a secret room. He listens to the cases brought to his friend Mark Poignand, and uses his mystic powers to see the solution. His enquiry agent colleague then goes off to find more orthodox proof. Kala Persad is thus most like M P Shiel's Prince Zaleski, an exotic visionary. It seemed to me that he had more potential and that it might be interesting to see how he would work as an independent character. The first episode in this career, "The Return of Kala Persad", will appear in Seventeen Stories from The Swan River Press, Dublin, next month. The story reveals that Kala Persad was not quite as depicted by Poignand, who did not fully understand his friend's powers: "When he would find me reclining idly, as he supposed, I was in fact transfixed in meditation, training my mind to that acute level of discernment which enabled me to solve his cases for him in a moment. And when I huddled close to the flames, it was not because I was cold, since I have long mastered matters of the body, but to sharpen my spirit by observing the golden dance of Agni, the fire-god." We also make the acquaintance of the seer's companion snake, the cobra Kalpa, an old soul, whose sudden emergence from his basket in a vegetarian restaurant startles a young and troubled Englishman. "The Return of Kala Persad" is one of three tributes to singular Victorian detectives in the book, along with "The Green Skull" (a Sherlock Holmes case) and "Prince Zaleski's Secret". In the latter, Shiel's refulgent sleuth pits his wits against decadent poet, mountaineer and occultist Anstruther Rook in a case threatening the delicate diplomatic balance between the Great Powers, indeed perhaps the fate of the Empire and the world. Other sets of stories offer Four Curious Books; Three Strange Places; Three Odd Societies; and Four Haunted Figures. Advance orders for Seventeen Stories are available now.
Posted by Mark V at 3:01 AM No comments: 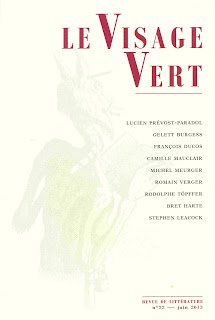 Another stellar volume of Le Visage Vert has appeared, and needs to be recommended.  This is issue no. 22, dated June 2013.  The lead items are a fascinating story "Mon Ami Hermann" by Lucien Prévost-Paradol (1829-1870), and an article by Norbert Gaulard on the double life of Prévost-Paradol.  "Mon Ami Hermann" was first published in 1858.  It concerns an amiable German university student whose soul, at night, inhabits the body of an Australian criminal named Parker.  When Parker is hanged, Hermann is also found dead.  The similarities with Stevenson's "Strange Case of Dr. Jekyll and Mr. Hyde" are apparent, but whether Stevenson ever encountered the story is unknown.

To order, visit this website and scroll down to find the all available issues of Le Visage Vert.
Posted by Douglas A. Anderson at 5:00 AM No comments:

The Golden Journey to Samarkand - Centenary


One hundred years ago James Elroy Flecker published a slim volume of verse from the obscure imprint of Max Goschen.  The title poem of “The Golden Journey to Samarkand” caught all the yearning for far-away adventure that so often comes to a people living on a grey island on the edge of the world. Flecker took a fabled city on the ancient Silk Road to the East and made it into a talisman for the wondrous and the exotic:

We travel not for trafficking alone:
By hotter winds our fiery hearts are fanned:
For lust of knowing what should not be known
We make the golden journey to Samarkand.

O friend unseen, unborn, unknown,
Student of our sweet English tongue,
Read out my words at night, alone:
I was a poet, I was young. 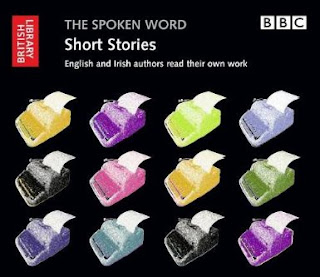 Just a quick plug here for a CD released in "The Spoken Word" series put out by the BBC and the British Library.  Short Stories: English and Irish Authors Read Their Own Work is a three disc compilation that includes  two stories read by Algernon Blackwood, one by Lord Dunsany, one by A.E. Coppard, one by Angela Carter, one by Kingsley Amis, as well as other authors including W. Somerset Maugham, William Trevor, Harold Pinter, Edna O'Brien, V.S. Pritchett, Sean O'Faolain, Phyllis Bentley, and Frank O'Connor.

The Blackwood tales include "The Destruction of Smith", first published in The Eye-Witness for 29 February 1912, and collected in Pan's Garden (1912); and "The Texas Farm Disappearance", published in The Listener for 13 May 1948, and collected in the section titled "Five Strange Stories" in The Magic Mirror: Lost Supernatural and Mystery Stories by Algernon Blackwood (1989), edited by Mike Ashley.  The recording of "The Destruction of Smith" was first broadcast on 6 September 1940, and that of "The Texas Farm Disappearance" was first broadcast on 10 May 1948.

Lord Dunsany's tale is one of Joseph Jorkens, "The Pearly Beach", first published in Vanity Fair for March 1932, and collected in Jorkens Remembers Africa (1934).

A.E. Coppard's tale is "The Princess of Kingdom Gone", which first appeared in Voices for November 1919, and was collected in Adam and Eve and Pinch Me (1921).

The Angela Carter story is "The Snow Child" and the Kingsley Amis on "The Green Man Revisited".

For me it's been especially nice to hear Blackwood and Dunsany read their own tales.  Blackwood's voice is more restrained than I might have expected considering his fame as a reader of ghost stories.  And Dunsany seems to have (to these American ears) only a slight Irish lilt in some words. Both are effective as readers of their stories.

For more details, here are the Amazon US and Amazon UK links.

Posted by Douglas A. Anderson at 2:24 PM No comments:

THE TWILIGHT LANGUAGE OF NIGEL KNEALE 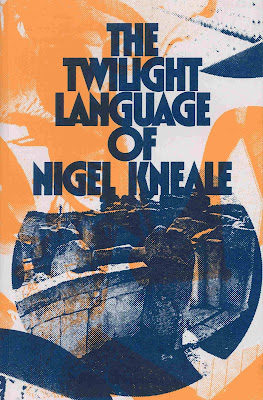 In November 2012, a day-long celebration was held at the Michelson Theater of New York, celebrating the British television writer Nigel Kneale (1922-2006), author of the Quatermass series, The Stone Tape, and The Year of the Sex Olympics, among many other works. A resultant book (with cassette tape comprised mostly of experimental synthesizer music inspired by Kneale's works) was published, called The Twilight Language of Nigel Kneale, edited by Sukhdev Sandhu, with contributions by Roger Luckhurst, Mark Pilkington, China Mieville, and others.  This small printing disappeared fairly quickly, but a second edition is reportedly in preparation. The contributions aren't especially well-edited---e.g., at least two contributors refer correctly to Kneale's birth in Barrow-in-Furness, while two others state  (incorrectly) that he was born in the Isle of Man. Some of the contributions are creative, while the more focused and analytical ones worked best for me (including one putting Kneale's least successful science fiction Kinvig into context).  A few essayists make intriguing remarks about Kneale's recurring contempt for his medium (television), which shows up (most obviously) in The Year of the Sex Olympics, as well as in the final Quatermass. Overall this volume makes an interesting entry point to the study of Kneale's work, which deserves all the attention it gets.