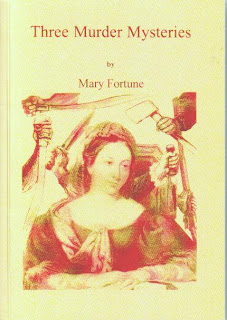 The acclaimed Australian writer/researcher, Lucy Sussex, has edited and introduced a collection of three Mary Fortune crime stories for the Canberra-based Mulini Press. Fortune, who wrote under the pseudonym Waif Wander or WW, is a fascinating figure, best known as the author of the longest-running early detective serial known, the Detective's Album, which appeared in the Australian Journal between 1867-1908.
In the introduction, Sussex traces the life of this extraordinary woman who was described in an 1898 article as "probably the only truly Bohemian lady writer who has ever earned a living by her pen in Australia."
Born in Belfast in around 1833 she came to Australia in 1855 via Canada, leaving her husband behind in Quebec. Of her two sons, one died aged 5 on the Victorian goldfields, while the other, George, became a real-life criminal, spending 20 years in Victorian prisons.
Apart from the Detective's Album, Fortune also wrote Gothic serials for the Australian Journal such as "Clyzia the Dwarf" and several supernatural tales, one of which, "The Phantom Hearse" is included in this collection. Such was the obscurity into which she fell that the year of her death remained uncertain until recently.
At 74 pages Three Murder Mysteries offers a sampler of Fortune's work and an authoritative introduction - my copy cost a meagre $10 at the National Library of Australia's bookshop.
Posted by James Doig at 2:24 AM 1 comment: