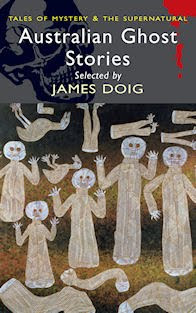 A shameless plug for an anthology I've edited collecting rare Australian weird tales from the 1860s to the 1930s. The book forms part of Wordsworth Editions' admirable Mystery & Supernatural series that publishes rare and out-of-print volumes at budget prices.

Australian Ghost Stories collects what I believe are the best stories of their kind published in Australia or by Australians during the golden age of the supernatural tale. It includes stories by well-known Australian writers such as Henry Lawson, Edward Dyson, Marcus Clarke and Guy Boothby (of Dr Nikola fame), as well as lesser-known authors such as Roderic Quinn, Mary Fortune, Beatrice Grimshaw and Ernest Favenc amongst many others.

I'm hoping the anthology will showcase some neglected Australian writers of popular fiction.

Nikola at the Theatre

A couple of early dramatisations of Guy Boothby's Dr Nikola should be recorded:

"A dramatisation of Mr Guy Boothby's novels, "A Bid for Fortune" and "Dr Nikola," was produced at the London Princess's on Saturday, March 29, under the title of "Dr Nikola." The work was adapted for the stage by Messrs Ben Landeck and Oswald Brand, who found plenty of sensational material in the Australian novelist's works. The first act, which deals with the beginning of Dr Nikola's quest for the charmed stick from Northern China, closes with a very powerful situation between Nikola and Dick Hatteras, the hero. Later the spectators' interest is sustained in a gambling saloon at Port Said, where Dick is entrapped, and in Sydney, where he is imprisoned in a cellar, from which he escapes in time to rescue Phyllis Weatherall, the heroine, from the hands of her persistent persecutor. Dr Nikola comes to a very terrible end. Through all the scenes there has hovered around, silently, the Chinese High Priest of Hankow, who, like Nikola, is eager to lay hands on the charmed stick. He speaks no word, but his face, appearing suddenly in unexpected places, causes an irresistible thrill. In the last act, when Dr Nikola is in his laboratory thinking that victory is within his grasp, the face appears at a window in the roof, and presently the High Priest is seen descending by a rope. There is a terrible struggle between the two desperate men, and in the end the Chinee, twisting his pigtail around the doctor's throat, contrives to choke the life out of him. Here, indeed, was a sensation for the Princess's patrons, and (says a London paper) on the first night of representation it thrilled them into an enthusiastic demonstration of approval."

In the lterary copyright records at the National Archives of Australia is a copy of Dr Nikola, a Drama in Four Acts, by Victorian actor Jefferson Tait. It was first performed by Philip Lytton's Dramatic Company at Good Templar's Hall, Stanthorpe in Queensland in March 1911. At the end of this dramatisation Nikola survives and is last seen heading towards a monastery in Tibet being met by welcoming monks.
Posted by James Doig at 4:00 AM No comments: