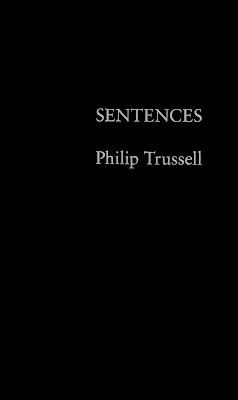 'In 2012, he started writing discontinuous sentences as a daily practice. He soon began arranging them into sequences on postcards and mailing them out.'

A book of barbed aphorisms with something of the atmosphere of Kafka, Walser, Cioran, Ligotti, strange, sardonic, sometimes sharp, sometimes oblique. Each provides a jag, a jolt, one of those forks of lightning that eerily illumine a scene, so that for a moment it seems utterly other.

A pocket notebook in appearance, a slim volume, austerely designed with black covers and silver lettering. This discreet form is pleasing: it seems as if you are holding something clandestine, to consult when you need it, on train journeys, in waiting rooms, while out wandering, or in backstreet cafes. It is like a bible-black tract from some obscure sect, full of singular interpretations and prophecies. Chiselled flakes of obsidian. 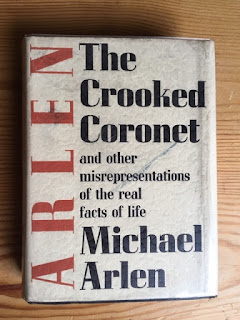 Some years ago Nicolas Granger-Taylor ran a series of London Walks, in which an assembly of louche characters visited literary haunts. Here is my guide to Michael Arlen’s London.

It is famous for the song, “A Nightingale Sang in . . .”, written by Eric Maschwitz. Up against a deadline, he glanced at the title of a story in a book lying about and seized on that for the theme and chorus of his song. The story was by Michael Arlen, in his collection These Charming People, sub-titled:

“Being a tapestry of the fortunes, follies, adventures, galanteries and general activities of Shelmerdene (that lovely lady), Lord Tarlyon, Mr Michael Wagstaffe, Mr Ralph Wyndham Trevor and some others of their friends of the lighter sort, written down by Ralph Wyndham-Trevor and arranged by Michael Arlen . . ."

Friends, they don’t write sub-titles like that any more, and we are the poorer for it. Arlen’s story was “When the Nightingale . . .” etc. And it concludes: 'A nightingale has never sung in Berkeley Square before and may never sing there again, but if it does it will probably mean something.'

Ironically, the story is quite the opposite of the song; not about spoony lovers but about a bitter irony to do with marital disloyalty.

Incidentally, Maschwitz himself was also a novelist, the author (amongst other things) of a fantasy, The Passionate Clowns, The Story of a Modern Witch (1927), under the name Holt Marvell, and several detective novels written with Val Gielgud.

Here is situated Quorn House, with a view of Berkeley Square, and a flight of stone steps going up to its door. This is the home of the Countess of Quorn & Beaumanoir, who entertains gentlemen to [ahem] tea. Here she is blackmailed by Michael Wagstaffe, the Cavalier of the Streets, a Raffles-like character who disapproves of her, in the title story of Arlen’s third Mayfair collection, The Crooked Coronet; they prove to be a real match for each other.

In “a quiet house” here lived Hugh, in the story “To Lamoir” in Arlen’s second collection, Mayfair. He is a man whose marriage is haunted by a childhood dream of an ideal playmate, a girl in a strange garden

Left into Queen Street, right at the end into Curzon Street - and here was where the narrator of The Green Hat saw the last of Gerald March, author of The Savage Device, a queer brutal mystic history about transcendence through pain, serialised first in The New Voice, disguise for The New Age, the journal that took Arlen’s early work.

We cross the road to Trebeck Street, and go down this to . . .

Michael Arlen lived here for around four years when he was trying to earn a living as a writer. He describes these in his runaway success The Green Hat. Above him, in the story, lives the tragic Gerald March. At the corner here was parked the sleek yellow Hispano-Suiza of the heroine Iris Storm, the almost-twin of Gerald, when she came to see him and ended up seeing rather more of the narrator.

Iris is modelled in part on Nancy Cunard, who told Arlen, 'I have a pagan body but a puritan mind'. To which he is said to have replied, 'I see. Tell me, are you ever absent-minded? . . .'

By the flower shop here, Maturin in “The Ace of Cads” meets a mysterious car sent to take him to the home of Sir Guy Conduit de Grammercy - with £1,000 for his trouble.

In Arlen’s thriller Hell! Said the Duchess, a white cardboard hat-box is found just inside the railings of Green Park, almost opposite Half-Moon Street. What’s in it? The head of a man - seemingly 'Jane the Ripper', the devilish villainess of the book has struck again. Riots result. 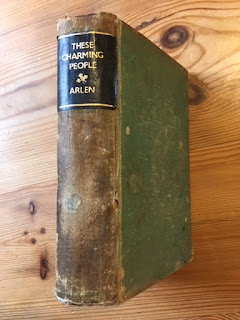 The scene of a story (in These Charming People), “The Locquacious Lady of” (etc): George Tarlyon was “almost half-way through before he realised that he was sharing the passage with another, a woman just ahead of him, walking slowly in his direction, loitering against the wall” who passes but then calls after him, and he touches his hat. 'I am afraid to walk alone through this passage', she says, and asks him to walk with her to the Curzon St end.

And she tells him why she is afraid and what happened to her here and how she heard the clock striking three: and Tarlyon runs headlong out of the passage as the clock strikes that hour again . . .

It is also the scene of Arlen’s story "The Prince of the Jews", in Mayfair, wherein Rear-Admiral Sir Charles Fasset-Faith is haunted by Julian Raphael, the black archangel. Here Landsdowne Passage is described as 'a slit in a grey wall' off Curzon Street, which 'leads between Landsdowne House and the wreck of Devonshire House to Berkeley Street'.

In "The Ghoul of Golder’s Green" (in Mayfair), Ralph Wyndham Trevor was walking up Davies Street and at the corner with Mount Street caught a cab, that lead to adventure.

In "The Man With the Broken Nose" (These Charming People), we think we meet an Armenian, who is really Michael Wagstaffe.

Michael Arlen was an Armenian by birth, born Dikran Koyoumoudjian. His family fled the Turkish persecutions and came to England when he was an infant, settling in Lancashire. But he never forgot his Armenian roots. In this story the hoaxer Michael Wagstaffe poses as an Armenian in order to pull off a theft from his own father. But Arlen uses it, subtly, ironically, to get across to his readers the history of his race, their courage and their implacable patience against their foes.

In the Prologue to Mayfair, we are told that 'where South Street becomes North Street', in 'a great house that stood in a walled garden' where 'ladies recline in slenderness on divans, playing with rosaries of black pearls and eating scented macaroons out of bowls of white jade', a young man sees a pale hand with a scarlet flower. Here the Princess of Valeria lives, a Ruritanian damosel, and a duel is fought for her in the garden - while she insouciantly goes off with another.

This is a light disguise for North/South Audley Street. And finally . . .

In “The Gentleman from America” (Mayfair), a tale is told by 'a decayed gentleman at the sign of The Leather Butler in Shepherd’s Market' about an untenanted, lonely house in Grosvenor Square.

And there are riots here in Hell! Said the Duchess, columns pouring down Bruton Street and South Audley Street, because here is where the demure Duchess of Dove, the chief suspect in the book, has her house. 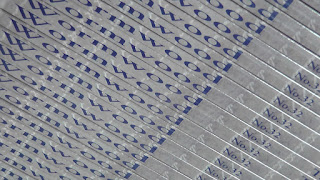 Wormwood 32 is now available. Several of our contributors in this issue discuss literary enigmas. Peter Bell considers ‘The Mystery of Mark Hansom’, an author who published a succession of weird thrillers in a five year period in the mid Nineteen Thirties, and then vanished. The name was no doubt a pseudonym — but who was the writer behind the mask?

Various theories have been suggested, but Peter puts forward a startling new proposal, supported by careful discussion. If he is right, this brings a whole new dimension to the work of another author in the supernatural fiction field.

Chris Mikul, meanwhile, looks into the unusual career of Julian Osgood Field, who wrote racy fin-de-siecle thrillers under the pseudonym ‘X.L.’ Though this identity has never been in doubt, the full extent of his other activities has not been revealed before, and they even involve an unfortunate contact with another noted literary family.

The decadent thrillers of Edogawo Ranpo, who may have adopted his pen-name from an allusion to Edgar Allan Poe, ought to be better-known outside his native Japan. Oliver Kerkdijk, in his celebration of the writings, concedes that Ranpo is no stylist, but celebrates the utter strangeness of his extraordinary fantasies.

Charles Eric Maine wrote what he liked to call ‘scientific thrillers’. As John Howard recounts, this pseudonym was adopted by a young SF fan from Liverpool who went on to produce a score of brisk futuristic novels. Like Ranpo’s work, they may not be read for their style, but they have their furtive enthusiasts for their narrative drive.

Victor Neuberg is perhaps still mostly known as an acolyte of Aleister Crowley. But, as Adam Daly explains, there was much more to this eccentric figure than this. He was a poet, an editor, an encourager of poets (among the first to publish Dylan Thomas) and most of all an elliptical visionary.

R B Russell discusses a mystery concerning that most recherché of literary figures, Frederick Rolfe, who adopted the pen-name Baron Corvo, and who has long obsessed collectors keen to discover anything at all to do with him, including somewhat unusual impedimenta.

In our regular columns, Doug Anderson offers Late Reviews of several books (and authors) which have not been widely noticed before. But obscurity does not necessarily mean quality, and Doug assesses which of them are merely competent and adequate, and those that are distinctive and original.

John Howard’s Camers Obscura column, devoted to the independent presses, ranges from an early 19th century supernatural tale which may be a previously unidentified piece by a distinguished figure in the field, to experimental contemporary prose.

Reggie Oliver reviews a new biography of Oscar Wilde, and offers his own illuminating insights into his life and work, and also discusses some recent contemporary fiction. 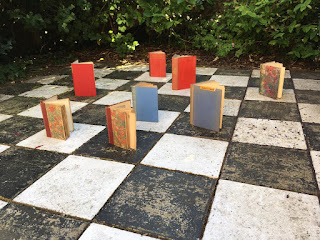 In 2017, I reported on The Rise of Secondhand Bookshops in Britain, and in 2018 I updated this, noting that the numbers seemed to be remaining broadly stable.

The news pages at the excellent website The Book Guide report regularly on newly opened or newly discovered bookshops, and also on closures, while customer reviewers provides notes on any that seem to be in peril.

In the first quarter of this year, the guide has reported new second-hand bookshops opening in York (Pitch 22), Barnard Castle (Curlews – a reopening), Bath (Fact or Fiction), Eastbourne (Vintage etc), Epping (Oxfam), Shipley (The Children’s Society), Hay-on-Wye (The Story of Books), and Halifax (Brame), and newly discovered ones at Strathcarron (Hospice Bookshop) and Kingcussie (Caberfeidh Horizons): whereas only one closure (Marlow, Oxfam) has been noted.

That’s a net increase of nine second-hand bookshops.Two thirds of those are privately owned, so the increase is not being driven mainly by charity bookshops.

Recent reviews by browsers do, however, note several existing bookshops that proved not to be opened when advertised or expected, although that has always been a characteristic in some parts of the trade, particularly in those shops gallantly run by sole owners.

It may well be, therefore, that a few shops are for all practical purposes closed, even if not officially so. But even if this is the case, we can still say that the number of second-hand bookshops in Britain remains at least stable, and more likely the total is continuing to rise slightly. Of course, this is only a picture from one full quarter of a year, but so far the sense that many collectors have of a steep decline continues not to show up in the figures.