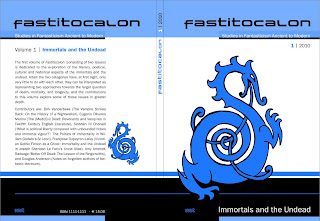 I understand the first issue of the new academic journal Fastitocalon is just out (though I haven't got my contributor copy yet).  Articles are in English, though it's published in Germany, and edited by Thomas Honegger (Friedrich-Schiller-Universität Jena) and Fanfan Chen (National Dong Hwa University, Taiwan).  I have a column in it, "Notes on Neglected Fantasists."  Those authors covered in my first installment include: Elinore Blaisdel (1902-1994), George Blink (1796-1874), Oscar Cook (1888-1952),Alan Miller (fl. 1920s-1940s), Francis C. Prevot (1887-1967), and Ernst Raupach (1784-1852). Herein it is revealed for the first time in English that the famous vampire story "Wake Not the Dead!", which is often attributed to Ludwig Tieck and considered an important pre-Polidori vampire story, is in fact by someone else, and its first publication occurred in its original German three years after Polidori's 1819 watershed tale "The Vampyre".  Tolkienists will be pleased to note the contribution to this issue by Amy Amendt-Raduege, "Better Off Dead:  The Lesson of the Ringwraiths".  A table of contents, and various information about the journal, can be found at the publisher's website.
Posted by Douglas A. Anderson at 8:36 PM No comments:

The Ghost That I Like Best: Famous Authors on Their Favourite Spooks Pt. 1

In the December 8, 1923 issue of T.P.’s & Cassell’s Weekly, there appeared a symposium of responses to a question along the lines of “What is your favourite ghost?”. Here are some of the responses.  More will appear in a future posting.

Yes, but what sort of ghost? The author’s “ghost”? Ghosts in literature? Ghosts I have met?  I have never yet met a ghost, and don’t want to. With Charles Lamb, I don’t believe in ghosts, but I am afraid of them. Of ghosts in literature I prefer those with plenty of clanking chains and grisly robes, ghosts that do squeak and gibber round the ivied walls at midnight. Marley’s ghost and the ghost of Hamlet’s father are most unsatisfactory; they are ghosts with moral purposes. Ghosts in fiction should have no purpose beyond that of hair-raising; and in this matter the best ghost I know is the ghost in G.W.M. Reynolds’s “Bronze Statue,” because I was twelve years old when I read it, and it was the first and only ghost that raised my hair.

You are quite right to think I have a favourite ghost.  I frankly confess the more ghostly the story or legend the happier I am! I think there has never been anything so terrible or realistic as Kipling’s “The End of the Passage.”  I do not remember anything with such horror in it.  To me it is the one great classic of the uncanny. Then there is that mad, jolly yarn of Richard Middleton’s, “The Ghost Ship,” the most crazy, most enchanting fantasy; to be read on a dark night with a wild wind and driving rain. It is absurd, if you like, with its village of nice, properly conducted ghosts, but it seems to me to have a magic of its own, and after you’ve read it, if the real ghostly spirit is upon you, then open your window and you can see “The Ghost Ship” sailing through the air, with her flare of lights and her noise of singing, her great masts raking the stars—I swear you can!

My favourite ghost is chosen by pure favouritism,  It is not much of a ghost, but it is my own, or, at least, I have a good long lease of it, which is nearly as good.

The house in which I live consists of two old cottages thrown into one. The little room which I use as a study was once, so far as I can judge, the kitchen and sole living-room of the smaller cottage. One day, some fifty years ago, the labourer who lived here, oppressed, I dare say, by the too close presence of his wife and children, hanged himself from a beam in this room. So says village tradition: and there is to this day a large, firm nail in the beam, from which a man might very well hang himself. He might, that is to say, if he were a dwarf or without legs; any other sort of man would find it difficult. And, for reasons which will appear, he cannot have been legless.

This tradition, once heard, vanished from my mind. But after some time it happened that I was working alone past midnight, all the others in the house being long asleep. Not quite alone, for my cat was there—a detestable cat, kept only for mousing, not at all an author’s favourite cat who shares his study and his labours with him. Something, I do not know what, made me look round.

There, directly beneath the suddenly sinister-looking nail, was the cat, walking up and down with all the motions and the pleased expression of a cat which is rubbing itself against someone’s legs. Up and down she went for several minutes, purring softly, while I sat looking over my shoulder, unable to move. Then I went to bed and left her there, and left all the lamps burning and all the doors open behind me.

And yet, strangely, in the morning the pride of possession threw out the horror of the night. It was my ghost, my very own; not a freehold ghost, to be sure, but even a leasehold ghost is more than most people have. He is my favourite ghost, now almost an “affable familiar ghost,” and I look at all others as a man who loves his own mongrel fox terrier looks at the champions assembled at Cruft’s.

My favourite ghost is that of Lord Strafford in the novel “John Inglesant.” “All to nothing,” he seems to me the most appropriate and majestic apparition that has ever been imagined.

As many of your readers will remember, it is two nights after Strafford’s execution (the consummation of King Charles’s betrayal of a loyal servant), and Inglesant, on duty at the palace of Whitehall, sees the dead man pass through the outer rooms and enter the King’s bedchamber,  “He was falling asleep when he was startled by the ringing sound of arms and the challenge of the yeoman of the guard on the landing outside the door. The next instant a voice, calm and haughty, which sent a tremor through every nerve, gave back the word ‘Christ.’ Inglesant started up and grasped the back of his chair in terror. Gracious heaven! Who was this that knew the word? In another moment the hangings across the door were drawn sharply back, and with a quick step, as one who went straight to where he was expected and had a right to be, the intruder entered the antechamber. . . .”

If anything could make me believe in ghosts, it would be Shorthouse’s conception and handling of this dread visit.

My favourite ghost story is what I believe to be also the shortest:

“Do you believe in ghosts?” said Jones.
“No,” said Smith.
“I do,” said Jones—and vanished.

Its authorship I do not know. It may be a chestnut too. Next to this, I place “Turn of the Screw,” by Henry James, for its majestic horror; and “The Monkey’s Paw,” by W.W. Jacobs, for it cumulative horror and its inevitableness.

I am very fond of supernatural stories, and am sure that the best I have ever come across exhibits the intangible couple of ghosts, those of the governess and the valet who float about the lake and establish a connexion of nameless horror and vileness with the two children who occupy the centre of the story called “The Turn of the Screw,” by Henry James.

If by my “Favourite Ghost” you mean the apparition that has most appealed to me in literature I should vote unhesitatingly for the ghost or ghosts in Henry James’s “Turn of the Screw.”
Posted by Douglas A. Anderson at 5:58 PM No comments: