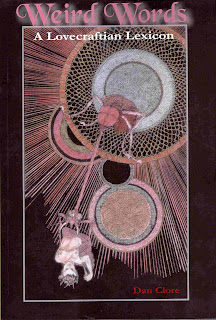 Now comes a first volume based on Clore’s database:  Weird Words: A Lovecraftian Lexicon (trade paperback, $25.00)  It’s a fine selection, a hefty 568 pages, but it leaves out most of the words I mentioned above, concentrating instead on words that Lovecraft used, like: blasphemous, Cyclopean, dæmonic/demonic, eidolon, eldritch, fœtid/fetid, ichor, leprous, litten, meep, night-gaunt, noisome, shoggoth, squamous, Tekeli-li (originally from Poe’s “The Narrative of A. Gordon Pym of Nantucket”), and vigintillion.

Which doesn’t mean that all the really odd words are excluded.  I was glad to see glame stone (from Arthur Machen’s “The White People”) make an appearance, along with hippocephalic, maunder, and nyctalops.

One of the first entries I turned to was that for Nodens, which has Tolkien, Machen and Lovecraft associations.  Here is some of Clore’s entry:


Nodens, Nodons, Nudens, pr.n. [see quotation from Puhvel] In Celtic mythology, a deity pertaining to healing, hunting, and the sea. Roman ruins found in Lydney Park, Gloucestershire, dating from the fourth century CE, include a number of votive tablets bearing well-known inscriptions to this deity. Based on his appearance in H.P. Lovecraft's "The Strange High House in the Mist" and The Dream-Quest of Unknown Kadath, August Derleth made Nodens into the head of his pantheon of benignant Elder Gods.[Not in OED.]

Titles: J.R.R. Tolkien, "The Name 'Nodens'" in Report on the Excavation of the Prehistoric, Roman, and Post-Roman Sites in Lydney Park, Gloucestershire (1932)

Dr. McCaul quotes from a letter from Meyrick to Lysons that "Deus Nodens seems to be Romanised British, which correctly written in the original language would be Deus Noddyns, the 'God of the abyss,' or it may be 'God the preserver,' from the verb noddi, to preserve; both words being derived from nawdd, which signifies protection." Prof. Jarrett, a profound Celtic scholar, to whom I applied for a translation of "Deus Noddyns" without mentioning Meyrick's explanation, at once rendered it as "God of the deeps," a sense that every circumstance confirms.
Roman Antiquities at Lydney Park, Gloucestershire: Being a Posthumous Work of the Rev. William Hiley Bathurst, M.A. (1879)

The name of the god, as given in the inscriptions, varies between Nudons and Nodens, the cases actually occurring being the dative Nodonti, Nodenti, and Nudente, and the genitive Nodentis, so I should regard ō or ū as optional in the first syllable, and o as preferable, perhaps, to e in the second, for there is no room for reasonably doubting that we have here to do with the same name as Irish Nuadu, genitive Nuadat, conspicuous in the legendary history of Ireland.
John Rhŷs, Celtic Folklore: Welsh and Manx (1901)

Underlying the stories of Nūadu (genitive Nūadat) and Lug and that of Lludd and Lleuelys we may thus discern a Celtic myth of Lugus bringing relief to Nōdons; the latter is attested in dedications from Lydney (cf. Lludd!) in Gloucestershire bordering South Wales (Deo Nodonti) and seems to mean 'Fisher' (cf. Gothic nuta 'fisherman', from *nudōn[s]), the probable ancestor of the Arthurian "Fisher King" of the Grail legend, whose maiming resulted in the Waste Land.
Jaan Puhvel, Comparative Mythology (1987)

After I had seen most of the sculptured stones, the coffins, rings, coins, and fragments of tessellated pavement which the place contains, I was shown a small square pillar of white stone, which had been recently discovered in the wood of which I have been speaking, and, as I found on inquiry, in that open space where the Roman road broadens out. On one side of the pillar was an inscription, of which I took a note. Some of the letters have been defaced, but I do not think there can be any doubt as to those which I supply. The
inscription is as follows:

"To the great god Nodens (the god of the Great Deep or Abyss) Flavius Senilis has erected this pillar on account of the marriage which he saw beneath the shade."
Arthur Machen, "The Great God Pan" (1890)

Down the valley in the distance was Caerleon-on-Usk; over the hill, somewhere in the lower slopes of the forest, Caerwent, also a Roman city, was buried in the earth, and gave up now and again strange relics -- fragments of the temple of "Nodens, god of the depths."
Arthur Machen, Far Off Things (1922)

A sea-god of the Britons, later confused with Neptune by the  Romans.
Talbot Mundy, note to Tros of Samothrace: Lud of Lunden (1925)

Trident-bearing Neptune was there, and sportive tritons and fantastic nereids, and upon dolphins' backs was balanced a vast crenulate shell wherein rode the grey and awful form of primal Nodens, Lord of the Great Abyss.
H.P. Lovecraft, "The Strange High House in the Mist" (1926)

He spoke, too, of the things he had learnt concerning night-gaunts from the frescoes in the windowless monastery of the high-priest not to be described; how even the Great Ones fear them, and how their ruler is not the crawling chaos Nyarlathotep at all, but hoary and immemorial Nodens, Lord of the Great Abyss.
H.P. Lovecraft, The Dream-Quest of Unknown Kadath (1927)

And with his hideous escort he had half hoped to defy even the Other Gods if need were, knowing as he did that ghouls have no masters, and that night-gaunts own not Nyarlathotep but only archaick Nodens for their lord.
H.P. Lovecraft, The Dream-Quest of Unknown Kadath (1927)

Dear, shall I pray the gulf's great deity,
Nodens, to bring once more for you and me
Some love-relinquished hour we could not save
That westered all too swiftly to the wave,
Ebbing between the cypress and the grass?
Clark Ashton Smith, "Sea Cycle"

All in all, some fine browsing and reading is to be found in this book.  I would have preferred that it have some kind of introduction, spelling out the methodology for inclusion and some history of the project, but I suppose that is my own particular bias. What is most clearly called for is a follow-up volume, of Weirder Words.  Removing the Lovecraft-centric emphasis on any further undertaking would make for a more wide-ranging and engaging volume.
Posted by Douglas A. Anderson at 3:52 PM