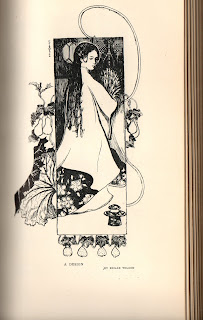 After the energy and earthiness of the earlier satirical illustrators (Rowlandson, Gilpin, Hogarth), Victorian illustration became mostly demure, with the fantastic and grotesque found chiefly in books of children’s fairy tales. It took the genius of Aubrey Beardsley to revive the art, with his boldness both of line, and of theme: and his angular figure leans over all the black and white drawings of the late 19th century like an audacious lamppost.

It is hard for other artists to stand out under his light. But one of these who was almost as highly thought of at the time was Edgar Wilson (1861-1918), who drew mostly for the lively and comic periodicals (The Butterfly, The Idler, Pick Me Up – their titles convey their frivolous contents) but is now completely overlooked.

The journal The Poster, Volume 6, No 31, February 1901, had a Note On The Work of Edgar Wilson, which still remains one of the few discussions about him. The following is an edited extract:

“To the most casual student of Mr. Wilson's work it will be obvious that he has been strongly influenced by Japanese art. There is probably no designer in England who is more learned than he in the productions of the great masters of Japan. It is precisely the reality and profundity of Mr. Wilson's knowledge which prevent him from making imitations of Japanese drawings. Many a designer, in the excitement born of his introduction to the colour-prints of Hokusai, Otamaro, and the rest, has given us occidental adaptations of them….

“It is the familiarity of Mr. Wilson with Japanese work which has enabled him to retain his own individuality while taking from the eastern convention much that is beautiful. His gift of decoration is quite Japanese in its ingenuity and luxuriance. From the most unpromising subjects he evolves delightful patterns. The drawings of the very prosaic exteriors of the London theatres and music-halls which some time back he contributed to Pick-Me-Up, were charming by reason of their graceful fantasy. We rubbed our eyes and asked if these were indeed among the realities of our town; if the façade of the Empire or Terry's was in fact a beautiful thing which somehow we had passed a thousand times and overlooked. Beautiful they undoubtedly are when reduced into decoration by Mr. Edgar Wilson…

"Mr. Wilson sees things with his own eyes; and records what he sees in his own manner. His etchings are among the very best which are being produced by the younger Englishmen of the day, and their popularity can only be a question of time. To me it is a surprising thing that people should buy reproductive etchings of pictures, when for the same money they can have original ones which artistically are of far higher value….

“As a book decorator, Mr. Wilson takes a very high place, and it is a remarkable thing that no publisher has secured his services for the entire production of an elaborate volume. Perhaps his work is best seen in the pages of The Butterfly. The failure of this little publication to obtain the support of the comparatively limited audience to which it appealed is, from the point of view of art, one of the most disappointing things of which I know. The literary contents were admirable, and when we remember that the artists included, besides Edgar Wilson, such men as Joseph Pennell, Raven Hill, Maurice, Greiffenhagen, O. Eckhardt, Paul Renouard , E. J. Sullivan, S. H. Sime, and J. F. Sullivan, its failure is somewhat inexplicable.

"For The Butterfly was a bazaar of smiling and alluring fancies. It is obvious that it stood no chance of appealing to that vast army of magazine buyers who delight in portraits of celebrities at various periods of their life, in personal articles written by ladies of title for the bourgeoisie, and in big instalments of portentously long serials by the authors of such masterpieces of fiction as The Sorrows of Satan and The Christian.

“Still The Butterfly really should have found five thousand righteous persons willing to achieve its salvation by spending sixpence a month on it. To The Butterfly, Mr. Wilson contributed not a few of his most delightful drawings. Not less important than these are the decorations with which he made scores of its pages distinguished. It is the air of distinction about Mr. Wilson's work which is especially welcome…. For many reasons is the file of The Butterfly a desirable possession; by no means the least of these is the brilliant series of head and tail pieces with which Mr. Wilson has adorned it. Fortunately some of the best of his work of this kind may be seen from time to time in the pages of The Pall Mall Magazine, but the scope for his gift is of necessity narrower in that publication than in The Butterfly.

“If Mr. Wilson is obviously fascinated by Japanese methods, he is evidently warmly attached to subjects which are essentially English. With pen and needle he delights to glorify our incomparable river at the points where the dome of St. Paul's and the bastions of the Tower loom over the houses on its banks. Sometimes he gives the Thames when it was crossed by old London Bridge and bore on its broad breast of waters the infinitely picturesque shipping of the spacious days of great Elizabeth….”

Lafcadio Hearn mentions Wilson in his essay 'About Faces in Japanese Art' which cites a paper given by the connoisseur Edward F Strange to the Japan Society: "He tried to explain the nature of the advantage likely to be gained in the art of book illustration from the careful study of Japanese methods; and he indicated the influence of those methods in the work of such artists as Aubrey Beardsley, Edgar Wilson, Steinlen, Ibels, Whistler...".

And indeed Strange, in his study The Colour-Prints of Hiroshige (1925) confirms Wilson’s devotion to Japanese art in his acknowledgements: "I would pay a tribute to the work of other students of the subject, and particularly to the late Edgar Wilson and to Mr. Arthur Morrison, who shared my early investigations into the question...".

One of the few recent mentions of Edgar Wilson's work occurs in Simon Houfe's Fin de Siecle, The illustrators of the Nineties (1992). In discussing The Butterfly he says: "But what captures the imagination is the work of Edgar Wilson, a marvellous decorative artist whose head and tailpieces (aptly named because they are often of fish) reveal an unending power of invention in a broadly Japanese idiom."

There seems to be very little biographical information about Wilson, other than his dates and the fact that he mixed with the other artists illustrating for the periodicals. The two illustrations here are from a bound volume of The Butterfly, and have not reproduced well, but give some hint of Edgar Wilson's exotic and elusive work. 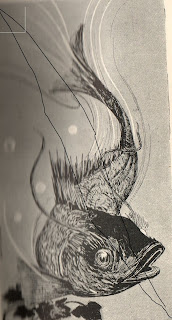