Borges and a Forgotten Book


As a long-time reader of forgotten books, I should know better than to let myself get my hopes up.  Many obscure books are forgotten for one of a great variety of reasons—it’s not that they are irredeemably bad books, or that they aren’t worth reading for some qualities, but they are often flawed in some ways.

Yet when I read a review written by Jorge Luis Borges of Of Course, Vitelli! (1938) by Alan Griffiths (1899-1950), I did get my hopes up. Of Course, Vitelli! was the fourth and final novel by Griffiths, the first three of which are Thorne Smith-type books, comedic farces of a type which has never interested me.

Here’s what Borges wrote, as a contemporary review of the book: 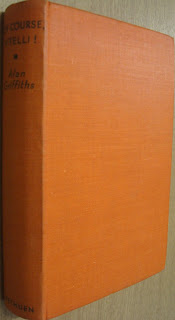 The plot of this novel is not entirely original (it was anticipated by Jules Romains and more than once by reality), but it is extremely entertaining. The protagonist, Roger Diss, invents an anecdote. He tells it to a few friends, who don’t believe him. To persuade them, he claims that the event took place around 1850 in the south of England, and he attributes the story to the “famous cellist Vitelli.”  Everyone, of course, recognizes this invented name. Encouraged by his success, Diss publishes an article on Vitelli in a local magazine. Various strangers miraculously appear who point out mistake in the article, and a polemic ensues. Diss, victorious, publishes a full-length biography of Vitelli, “with portraits, sketches, and manuscripts.”

A movie company acquires the rights to the book and makes a technicolor film. The critics declare that the film has distorted the facts of Vitelli’s life. … [sic]  Diss becomes embroiled in another polemic, and they demolish him. Furious, he decides to reveal the hoax. No one believes him, and people hint that he has gone mad. The collective myth is stronger than he is. A Mr. Clutterbuck Vitelli defends the affronted memory of his late uncle, A spiritualist center in Tunbridge Wells receives direct messages from the deceased. If this were a book by Pirandello, Diss would end up believing in Vitelli,  (El Hogar, 18 November 1938)


The sad truth is that Borges has simplified and altered the details of the plot. Diss’s anecdote involves the imaginary Vitelli, whom no-one recognizes initially. Diss doesn’t write an article in a magazine, but publishes a letter in a local newspaper requesting further information on Vitelli. It’s only in a weak moment that Diss considers revealing the hoax, but he is dissuaded by one friend who is also a participant in the hoax. In fact Diss ends up being put on trial for perpetrating the hoax. There is no nephew of Vitelli, and there is no character named Clutterbuck Vitelli. Whether Borges kept bad notes or deliberately altered the details is anyone’s guess.

Of Course, Vitelli! is basically just like Griffith’s three previous novels. It is an extended farce—a farce of the local Suffolk gentry, of spiritualism, of tabloid newspapers, of publishing, and of modern film making. Diss’s biography, Vitelli, the Magyar, tells of Michel Vitelli, castrated as a young boy in an attempt to stop his voice from falling, and his ill-fated love for Miss Amy Folkard. Diss’s book is being made (quite appropriately for a farce) into a modern musical film starring current celebrities as The Loves of Vitelli, which plays as loose with the book’s facts as Diss played loose with his own imagination.  Production on the film is halted when Diss is put on trial “for conduct subversive to the public interest,” and the trial ends after Mr. Raffelo Vitelli shows up and claims that Vitelli was his mother!

Of Course, Vitelli! is not, as Borges said, “extremely entertaining.”  It is an improbable farce that is carried on long beyond the reader’s threshold for boredom. Perhaps it was Borges's joke to make it sound more interesting than it is.
Posted by Douglas A. Anderson at 2:00 AM