In his prefatory note to Nathan Van Patten’s The Lost Bookplate of Arthur Machen (Greenwood Press, 1949), Vincent Starrett refers to Machen’s bookplate as “one of the great rarities in its field.”  Starrett mentions a letter from August 15, 1922, in which Machen notes his bookplate “dates from the early nineties.  I think I have now only one book containing it, and the plate itself disappeared long ago.”  Van Patten asserts that the bookplate’s designer is G. P. Jacomb Hood, who produced the etching used as the frontispiece for Machen’s translation of The Fortunate Lovers, published by George Redway in 1887.  At the time when Van Patten’s booklet was published, only three copies of Machen’s  bookplate were known to exist: : 1) one in Machen’s copy of The Great God Pan, referred to by Machen in a letter to Starrett dated November 1, 1923, whereabouts unknown; 2) one in Machen’s copy of M. P. Shiel’s Shapes in the Fire, which was owned at the time by Adrian Goldstone; and a copy of the bookplate, presumably loose, cataloged by Thomas Thorp, a bookseller, in 1922, whereabouts also unknown.

A fourth example of Machen’s bookplate was reproduced in Steve Eng’s essay “M. P. Shiel and Arthur Machen: Parallels in Life and Literature” in Reynolds Morse’s M. P. Shiel in Diverse Hands: A Collection of Essays (Reynolds Morse Foundation, 1983).  This example of the bookplate is taken from Machen’s copy of the John Lane edition of Shiel’s Prince Zaleski, which at the time belonged to Shiel enthusiast John D. Squires.  Machen’s copy of Prince Zaleski was unknown until Squires acquired it from Massachusetts bookseller Harold M. Burnstein in March of 1980.  This copy of Prince Zaleksi is part of the Squires’ archive currently being cataloged by noted bookseller Lloyd Currey.

Years later, Squires correctly identified the designer of Machen’s bookplate as Herbert Jones, the chief librarian of Kensington from 1887 to 1924.  In email to Caermaen, the Friends of Arthur Machen, dated September 28, 2010, Squires discusses downloading  a copy of  Artists and Engravers of British and American Book Plates: A Book of Reference for Book Plate and Print Collectors by Henry Walter Fincham (Keagan Paul, Trench, Trubner and Co., Ltd., 1897), a resource clearly not available to Van Patten in 1949.  Squires states, “At page 51 [the reference] lists various bookplates designed by Herbert Jones, London, including for Arthur Machen, ‘Two Varieties,’ signed on the plate ‘HJ.’”(Van Patten had mistakenly read the initials on the bookplate reversed as “JH.”) Squires also wonders, “Is anyone aware of any further examples of the bookplate?  Or what distinguishes the ‘Two Varieties,’ which Fincham noted?”

While recently helping Lloyd Currey identify some typscripts of Shiel stories that resemble screen treatments, I wrote Ray Russell at Tartarus Press to see what insights he might have, inadvertently forwarding him an email exchange between Lloyd and I about Machen’s bookplate and the fate of the books in Machen’s library.  This turned out to be entirely fortuitous.  While Ray didn’t know anything about the Shiel typescripts, he did have information regarding the whereabouts of Machen’s books: “Those books [Machen] owned at his death stayed in the family, and I remember seeing in Janet Machen’s library a number of such volumes.  I am sure these are still with the family.  However, he obviously disposed of books at various times in his life, some of which ended up in the hands of US collectors.”  More importantly, Ray disclosed the discovery of a fifth example of Machen’s bookplate: “The Friends of Arthur Machen recently received, as a gift, Machen’s own copy of Parker’s Gothic Architecture, which we have now donated to the British Library.  It was inscribed to Machen by his father, and had Machen’s bookplate, and was obviously very personal—but there was an entry from a bookdealer’s catalogued tipped in to show that it had been sold for 5s during Machen’s lifetime.”

Excited by the prospect of getting to see images of this example of Machen’s bookplate, which is still unknown to most Machen enthusiasts, I wrote Sharon Agar, a metadata specialist at the British Library, to see if she might be able to send me scans from the book.  Thanks to Sharon and her colleagues at the St. Pancras location, the images below have been made available for us to enjoy.  The book in question is John Henry Parker’s An Introduction to the Study of Gothic Architecture published in 1874 by James Parker and Company.  As his father’s inscription indicates, Machen received this book as a Christmas present in 1876 when he was just fourteen years old in the Lower Fourth at Hereford Cathedral. 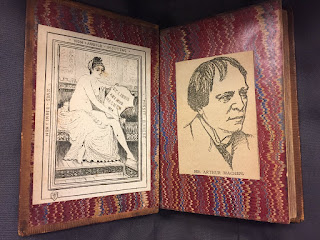 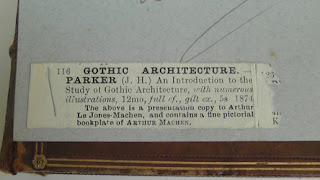 To bring things full circle, after hearing from Neil, I wrote my colleague, Jim Kuhn, associate director at the Harry Ransom Center at the University of Texas, to see if he could confirm John Squires’ assertion that Machen’s copy of Shapes in the Fire resides in the Center’s Adrian Goldstone collection.  Although the Ransom Center has five first editions of Shapes in the Fire, including a copy with Shiel’s own bookplate, Machen’s copy with his bookplate is not among their holdings.  Jim, however, did send scans of two additional previously unknown examples of Machen’s bookplate that are in the Adrian Goldstone Collection.  One is cataloged as a “proof” of the bookplate, and the other, seen in a black and white snapshot of book inscribed by Machen in 1923, is cataloged as an “unknown bookplate.”  (The images Jim shared cannot be reproduced, but the items are described in the list of the Center’s Adrian Goldstone holdings in container 19.5, along with the typed manuscript of Van Patten’s booklet.)

Are there even more extant copies of Machen’s bookplate floating around in the ether?  Almost assuredly there are, and ideally the collectors and curators who “rediscover” them will continue to share them with those of us who love Machen’s work and all things related to him.