A Harp in Llanidloes, and A Twist in the Stair 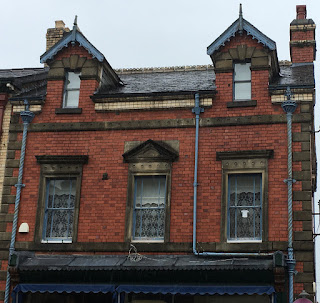 It was a grey, wet day at the end of September in the remote little town of Llanidloes, Montgomeryshire, which lies among the Cambrian Mountains in the middle of Wales. But our spirits were lightened as we entered the Great Oak second-hand bookshop by the echoing notes of a harp. In the mezzanine room at the back of the shop, a friend of the owner was rehearsing delicate old melodies. Along with the lute, the sound of the harp always conveys to me a sense of the ancient past, the days of court bards and wandering minstrels.

A favourite album of my youth was Alan Stivell’s Renaissance of the Celtic Harp (1971), which was doubly magical because its pieces drew upon Breton folklore, such as the stories of the sunken kingdom of Ys, and indeed one piece was accompanied by the slow wistful sound of waves upon the shore. Whether it was the influence of the spell of the harp, or whether it was because Llanidloes itself is a place of witchery, I certainly found some curious books there.

We had selected just a handful of titles of interest in the front of the shop, and in the two-storey outhouse reached through the back door, and were just about to take those to the counter when I noticed to one side a wicket gate at the top of some stone steps. These proved to descend into a cellar. There was a turn in the stair, and as I came to the last step, I saw ahead of me a few small bookcases with children’s books, but not much else, and I was about to return. But then I looked to my right and lo! – there were rows and rows of old hardback fiction, which is what I always want to find and, these days, often don’t.

The first book I encountered, right in front of my nose, when I began my eager browsing among these shelves was a mottled copy of Fanfaronade (1934) by Ivo Pakenham, which I have written about here before, a timeslip fantasy in which a scholar of medieval history finds himself transposed to a duchy perhaps not unlike Burgundy. And the curious thing is, and this only occurred to me a little later, that he reaches this realm by taking some stone steps downward from a secret door in the chamber of a French chateau, and following a turn in the stair. . .

Nor was Fanfaronade the only good find down in the cellar. Here were also three books by Claude Houghton, including a 1938 edition of his first novel, Neighbours (1926). There was also Arminel of the West (1909), a Devon romance, in pictorial boards, by the often distinctly odd John Trevena. Then there was a Yorkshire rural saga, The Cliff End (1908) by Edward Booth, in the Holderness edition of his novels, named after the coastal eastern corner of the county where his books were usually set.

This author was praised, and I had noted his name for this reason, by the American Machen enthusiast Paul Jordan-Smith in one of his volumes of bookish essays, probably For the Love of Books: The Adventures of An Impecunious Collector (1934). (That collector, incidentally, would have been much cheered by the prices of the books in the cellar, which were moderate indeed.) The dustwrapper flap of Booth’s book tells us it is “an unashamedly sentimental, old-fashioned, novel,” while J.B. Priestley (also a Yorkshireman) is quoted as saying it is “not unlike an interior by an old Dutch master doubly based on close observation and deep feeling.”

And my fingers also found their way to a desert adventure yarn tinged with occult elements, The White Knights (El Firsan El Bied) (1912) by T.G. Wakeling. Now, Wakeling was the author of a book I acquired a while ago because of its irresistible title, Forged Egyptian Antiquities (1912). Largely anecdotal, it gave interesting sidelights on the differences between forgeries and the genuinely ancient, and made the point that some of the fake artefacts were worth having simply as well-made art objects, even without their alleged antiquity.

As we made to leave Llanidloes, we noticed a most unusual architectural feature which at once took our fancy. An old red-brick shop had drainpipes in a pleasing shade of powder blue – but not only that, these were barley-twist drainpipes, a shape in rainwater columns neither of us had ever seen before, which gave them a distinctly eccentric, Gothicky look. Thoughts of a monograph on “Curious Drainpipes of Mid-Wales” at once began to take form.