A Postcard from the Tower of Moab 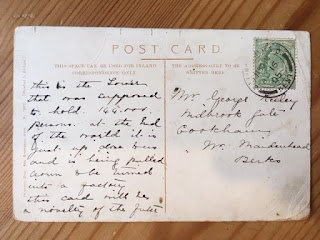 In a previous post we discussed the likelihood that L A Lewis’ story ‘The Tower of Moab’ was based upon Jezreel’s Tower, Gillingham, Kent, and in another post reported on a local history group’s account of the demolition of the tower. Before it was destroyed, however, the tower was very much a local landmark, and it was depicted on several designs of postcard.

Quite a few of these survive. The example illustrated here, printed by Thornton Bros of New Brompton, Kent, is postmarked August 16 1905, and has a message from the anonymous sender with a couple of interesting allusions.

It reads: “This is the Tower that was supposed to hold 144,000 persons at the End of the world it is just up close to us and is being pulled down to be turned into a factory this card will be a novelty of the future.”

The author’s last comment was prescient. But it is also interesting to see a first hand report of the lore associated with the Tower, and also to learn that it was thought locally to be about to be demolished as early as 1905. In fact, demolition did not begin for another 55 years and it was not finally destroyed until 1961.

The recipient of the postcard lived in Cookham, Berkshire which, curiously enough was the birthplace and home village of Stanley Spencer, the artist most known for his visions of the resurrection of the dead at the end of time. 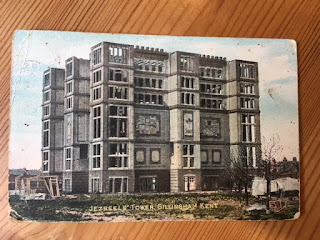