Through the Valley of the Wolves

The road to Tartarus is over a high bare moor. You get first to the Dales village of Kettlewell, which was the retirement home of C J Cutcliffe Hyne, author of the Atlantis fantasy The Lost Continent (1900), and creator of the nautical rascal Captain Kettle, who in his day was, it is often said, as popular as Sherlock Holmes.

The proceeds from this conniving skipper’s doubtful activities were usually sent back care/of the Particular Baptist Church, Wharfedale, and it was doubtless this dale and village the author had in mind. His grave, and that of his family, is in the form of a rough-hewn stone in the peaceful graveyard.

Cutcliffe Hyne also wrote a tale about a prehistoric lizard that comes alive in a cave near Kettlewell, and you can well believe it as you gaze up at the looming limestone crags above the road, with their curious fissures.

The other thing for which the village is noted is its annual Scarecrow Festival when the inhabitants display stuffed effigies outside their doors, in their gardens and in public places. One year a circle of scarecrow-children were tied by their hands to the ribbons of the maypole. When the wind rose, and the pole swivelled, their arms were lifted up and their bodies swayed as though in an eerie dance. At least, I hope it was the wind that was doing that.

The route is ideal for those who like to contemplate the scenery, graced as it is on this occasion by a phalanx of cyclists, a behemoth of a tractor, several sorties of sauntering pheasants, and a flock of sheep out for a stroll, with the languid sheepdog hitching a ride on the shepherd’s quad bike and observing with only indifferent interest the progress of his fleecy charges.

Beyond Kettlewell the road, really no more than a narrow track, rises steeply and in blind curves, and you emerge, you hope, on plunging hill slopes. For most of the way there is not a sign of human habitation to be seen, and nothing much in the way of trees. I was once caught up here one evening when a mist suddenly came down in pale tendrils and I had to proceed at walking pace through these swirling wraiths. I expected The Hound of the Baskervilles at any moment.

But in fact the beast in the mist might have been worse even that. For the first settlement (barely that) to which you eventually descend after traversing the moor is called Woodale, and consists of half a dozen houses. It is too small even to have a post-box. The name of this hamlet means “the Valley of the Wolves” and this is one of the places where the last wolf in England is said to have stalked. Or possibly may be stalking still.

A small village a little further on is called Horsehouse and I will leave you to speculate on where that name may come from. However, what I can tell you is that the landlord of the local inn bears an uncanny resemblance to the portrait of L. Sprague de Camp on the back of the dustwrapper of his biography of Lovecraft. I’m quite prepared to believe there is a firkin or two of Old Arkham Ale secreted in his cellar.

But this is not the only quaintly named place, for you are now in Coverdale, where most of the villages and hamlets sound like characters from Mervyn Peake’s fiction: Swineside, Fleensop, Gammersgill and Scrafton could all be furtive conspirators among the gloomy passages of Castle Gormenghast.

The village of Carlton-in-Coverdale itself, our destination, is usually fairly safe ground for the traveller, so long as it is not Foresters’ Day, when the inhabitants garb themselves in green and process up the street brandishing arcane objects and accompanied by the call of horns. The wicker-work classes in the village hall are very popular for a few weeks beforehand.

We have timed our arrival with discretion when it may be possible to slink into the village unobserved, and draw up near the elegant house, with its fine topiary, that is the temple of Tartarus. A rattle on the talismanic brass elephant door-knocker echoes in the stone-flagged passage beyond. The door swiftly opens. Our hosts, Ray Russell and Rosalie Parker, immediately fortify us with bracing draughts of coffee. There, below an ornate rococo mirror and two tall baroque angels (named, we learn, Denton and Eric) the table has been prepared for the ritual.

Our fountain pens, charged with vials of exotic ink, are placed reverently upon the table, with Parisian blotting paper to hand. Tottering boxes seem to outdo even the beetling cliffs of Kettlewell. To encourage us to make good progress, a selection of soothing ambient and drone music proceeds from the gramophone secreted in an ancient aumbry (“is that an aeroplane going over?” enquires Mr Howard). And thus begins the ceremonial signing of three hundred copies of Inner Europe. 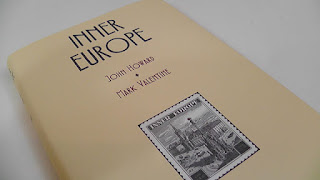