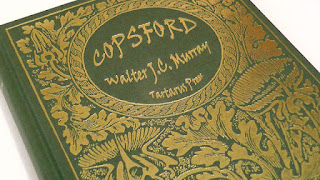 Last June, I wrote about Copsford (1948) by Walter J C Murray, the story of a young man's year in a lonely and semi-ruinous house in Sussex, trying to make a living by collecting wild herbs. I described it as ‘firstly a personal memoir and secondly a natural history study’, adding that ‘it is also, in its subtle, diffident way, a record of . . . fleeting visionary experiences . . . People who encounter it are apt to be unusually impressed by its fugitive qualities, its curious mood, and by the compelling honesty of the account.’

I am pleased to report that Tartarus Press has just announced a new edition of Copsford, with a sympathetic and fascinating introduction by R B Russell, who has family connections to the story. This provides more information about the mysterious house of Murray’s book, and also about the author himself. As ever with this publisher, the edition is beautifully designed.

I think that anyone who enjoys stories of the supernatural about strange old houses or remote country, such as those by Machen, Blackwood and de la Mare, will also appreciate this book. As I said in my earlier post, Copsford is ‘one of those singular books, haunted by elusive qualities, that leave the reader wistful, in a mood of mingled joy and melancholy.’