The Strange World of Colossive Press 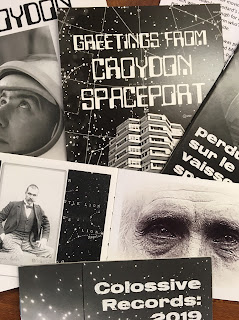 This important publication is available from Colossive Press, an imaginative South London zine publisher. Also available from them is High Precision Ghosts, an eerie hand-sewn double-concertina book of enigmatic photographs which look like they might be from Carnacki the Ghost-Finder’s personal album, or  snapshots taken by Mr Dyson in his quests as a savant of the singular.

Enthusiasts of hauntological music meanwhile will enjoy the Colossive Records 2019 catalogue of their highly elusive releases, sub-titled ‘Urgent transmissions from the liminal zone where noise meets sound’, featuring such outfits as Carrion Baggage, Alabaster Chambers and The College of Emotional Engineering.

The press also issues a series of zines made up from a printed sheet of A4 paper folded up to A6 size using a technique known as the Turkish Map Fold, which sounds like it might be a mysterious clue in an Eric Ambler novel. The idea is that these are the equivalent of the much-loved 7” single format in records.

There is much more to discover in the strange world of Colossive Press.