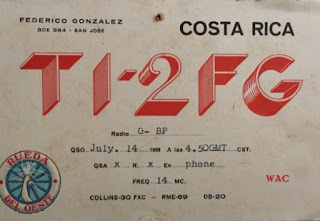 In the late 1930s a young man living in Flint, North Wales, operated from his home an amateur radio set. He searched for signals from other wireless enthusiasts across the world. When he made contact he sent them a postcard to confirm he had heard them: and they sent him a card back.

These are called QSL cards. The letters QSL mean “your transmission confirmed”, using the Q code originally developed for use by ships and coastguard stations and later adopted by radio operators more generally. In the days when reception was erratic and difficult, radio hams sent them to one another as proof that they had made contact. Soon the sending and receiving of cards became a subsidiary hobby in itself. 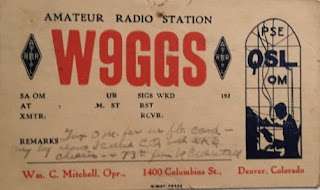 Each card has on it a few manuscript numbers and phrases which record the time of contact, the signal strength, and other technical data. There might also be a brief handwritten message. In keeping with the argot of the craft, these passing correspondents addressed each other as “OM”, short for Old Man, the affectionate Wodehouseian term for fellow radio hams. In the card above, 'PSE QSL OM' means 'Please Confirm Transmission, Old Man'. Sometimes this exchange of cards grew into a pen-friendship, and even, though rarely, meetings.

The cards received by the young man in Flint present a panorama of styles and designs from the period. Some show the sender seated in the bedroom or shed or studio where they received and sent signals, surrounded by sturdy boxes with antennae, dials, switches and levers. Other cards have bright or bold art deco lettering, or rays or zigzags or ripples to represent the sound waves reaching out into the skies. There are cheery mottoes, nicknames, greetings and watchwords. 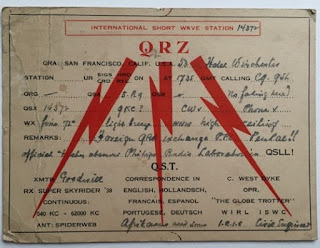 From these we can catch a few glimpses of the character and circumstances of some of the senders, who may not otherwise now be remembered, or may be known only to a few. The Flintshire operator made contact with fellow enthusiasts not only in Britain and Europe, but the USA, Australia, Ecuador, Costa Rica, Argentina and Trinidad and elsewhere.

I found this cache of forty or fifty cards in a cardboard box on a trestle-table stall at a book-fair in a civic hall some years ago and could not resist getting the lot. I was attracted by the designs and the brief handwritten messages and the fact that these were an unusual sort of ephemera, recording an ephemeral contact. 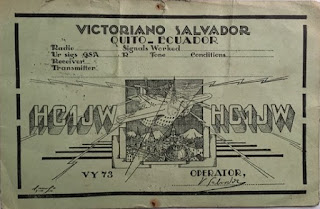 I began to wonder what would have happened if a card had arrived one day from no known part of Earth and in an alphabet previously unseen.

All of these pieces of card represent a reaching out from one individual to another, a gesture of contact, a shared passion that thought nothing of borders or barriers. The signals they record still resonate many years later from those brief brittle moments when these young voices crackled one to another across the voids of the world. 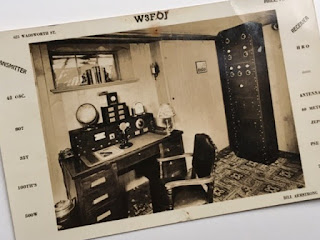